Zombie Invasion! The Pentagon Prepares, and Nonprofits Had Better Get Ready 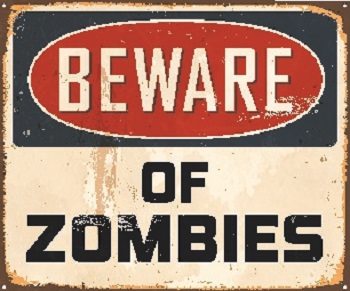 Among our favorite zombie dead killer movies are Robby Rodríguez’s Planet Terror (with actress Rose McGowan shooting zombies with her machine gun leg), the brilliant 28 Days Later directed by Danny Boyle, Simon Pegg’s wry and funny Shaun of the Dead, and any of the “Dead” films by George Romero.

We thought that they were all fiction. Who would have thought that living zombies were a real threat? Apparently, the Pentagon does. George Lubold writes in Foreign Policy that the Department of Defense has a plan ready to protect “non-zombie humans” from flesh-eating zombies called “CONOP 8888.”

“This plan fulfills fictional contingency planning guidance tasking for U.S. Strategic Command to develop a comprehensive [plan] to undertake military operations to preserve ‘non-zombie’ humans from the threats posed by a zombie horde,” says the summary of CONOP 8888. “Because zombies pose a threat to all non-zombie human life, [Strategic Command] will be prepared to preserve the sanctity of human life and conduct operations in support of any human population—including traditional adversaries.”

According to Lubold, “Navy Capt. Pamela Kunze, a spokeswoman for Strategic Command, acknowledged the document exists on a ‘secure Internet site’ but took pains to explain that the zombie survival guide is only a creative endeavor for training purposes.” In other words, rather than developing boring scenario after scenario of the U.S. attacked by hordes of Russians and Nicaraguans (the theme of John Milius’s Red Dawn) or Chinese or whoever, the Pentagon seems to have spiced up its training by a plan says it aims to ‘establish and maintain a vigilant defensive condition aimed at protecting humankind from zombies.” Probably the intent is, if the military can figure out a plan for surviving an invasion of zombies, it can definitely work its way through an invasion by Kim Jong-un.

There is plenty in the plan that relates to nonprofits. For example, the plan is meant to “aid civil authorities in maintaining law and order and restoring basic services during and after a zombie attack.” That sounds like a challenge to the nonprofit infrastructure, especially the nonprofits engaged in disaster relief and recovery. There are also aspects of the plans that touch on the roles of health-oriented nonprofits, including a “worse case threat scenario,” described by Lubold as “lots of zombies eating lots of people, zombies infecting humans at a rapid rate, and little or no immunity and few effective countermeasures.”

In the plan’s “Zombie Threat Summary,” providing a typology of potential zombies, the plan touches on agriculture, including vegetarian zombies that eat only plants and therefore, we assume, might threaten food supplies, and “chicken zombies,” which the plan suggests really exist—euthanized, buried chickens somehow clawing their way to the surface.

If the story about the Pentagon plan is true, we should expect to see zombie-oriented nonprofits capitalizing on it. For example, there are six nonprofits with “zombie” in their names identifiable through GuideStar, including Cyborg Zombies in Escondido, California, and Zombie Squad International based in St. Louis. It could definitely be a seminar or workshop theme at the San Diego Comic Convention, one of the largest nonprofit comic-cons in the nation.

It has to be a spoof, right? This can’t be real. The Pentagon couldn’t have invested in a zombie survival manual, could it? Or was George Romero really on to something?—Rick Cohen