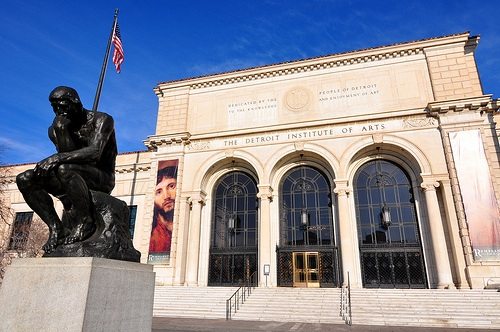 Score one rare victory for long-term thinking in American government. Michigan state Attorney General Bill Schuette stated in an official opinion Thursday that the cash-strapped City of Detroit cannot sell off valuable artwork housed in the Detroit Institute of Arts.

In a 22-page opinion, Schuette held that while nominally owned by the city, the works of art are held in trust for the past, present, and future citizens of the destitute and nearly defunct Motor City, as well as the rest of Michigan’s citizens. Schuette summed up his own masterwork artfully, stating, “It is my opinion, therefore, that the art collection of the Detroit Institute of Arts is held by the city of Detroit in charitable trust for the people of Michigan, and no piece in the collection may thus be sold, conveyed, or transferred to satisfy city debts or obligations.” Schuette’s opinion takes a holistic view of governing law and obligation, considering nonprofit corporation law, Michigan trust law, DIA’s 1997 operating agreement and collections management policies, ethical codes of several museum associations, and Detroit City’s accounting practices.

Schuette noted that the DIA was founded in 1885, and never has the financial straits of one of the most iconic cities in America been so dire that the people demanded their fine art treasures be sold off to satisfy the fisc. Schuette concluded that his fellow Michiganians are civic- and forward-minded, that “recognize[ing] that abandoning or selling the public’s artwork would damage not only the city’s but the state’s cultural commonwealth. In Michigan, we not only appreciate our cultural treasures, we guard them zealously in charitable trust for all state residents, present and future.”

Michigan Senate Majority Leader Randy Richardville, a Republican from the city of Monroe, had called for the Attorney General to chime in on the controversial issue after Gov. Rick Snyder appointed Kevyn Orr as the city’s emergency manager. Orr claims that he is not interested in selling off DIA pieces, and asserts that he is exploring doing so because he is obliged to itemize Detroit’s assets in the effort to redress the city’s $15 billion in debt.

The DIA collection houses such prime masterworks as Vincent Van Gogh’s 1887 self-portrait, “The Wedding Dance” by Pieter Bruegel the Elder, and “Madonna and Child” by Giovanni Bellini. Protests of the possible sales have arisen across the country. In the recent past, other municipal governments and universities have considered selling off classic art, including Brandeis University, which in 2009 sparked outrage when it floated a plan to sell off the entire collection of its Rose Art Museum.

Sen. Richardville made an impassioned plea against saving a city by selling its soul: “If you’re talking about rebuilding a city—and the financial aspect is one part of it, that’s important. But you can’t also destroy the culture and then expect to build it back up from nothing. So we want to maintain the cultural assets that are there and say we want to build Detroit from these things, not against its own assets.”—Louis Altman