Editors’ note: This article, first published in the Grassroots Fundraising Journal in Mar/Apr 2010, has been republished for Nonprofit Quarterly with minor updates.

If you can imagine a really large prison crammed with livestock—chickens, pigs, or cattle—you’ve got some idea of what a factory farm is like. Thousands of animals stand in their own waste until the employees—often low-wage immigrant workers—hose it into large, foul holding ponds. These practices are not only hard on the animals and the workers, they’re also hard on the neighbors, the land, and the water they depend on.

Iowa Citizens for Community Improvement (CCI) helps local communities fight back on social, economic, and environmental justice issues, including the impacts of factory farms. Iowa CCI members organized to counter intensive pressure from the Farm Bureau and other special interests as citizens sought to protect Iowa’s water quality. The resulting victory took their opponents by surprise—the new legislation was even stronger than the original rule that Iowa CCI had been working to pass. Without a large and active membership, it never would have happened—and without an aggressive “ask” program, the organization would never have built the membership base needed to win. 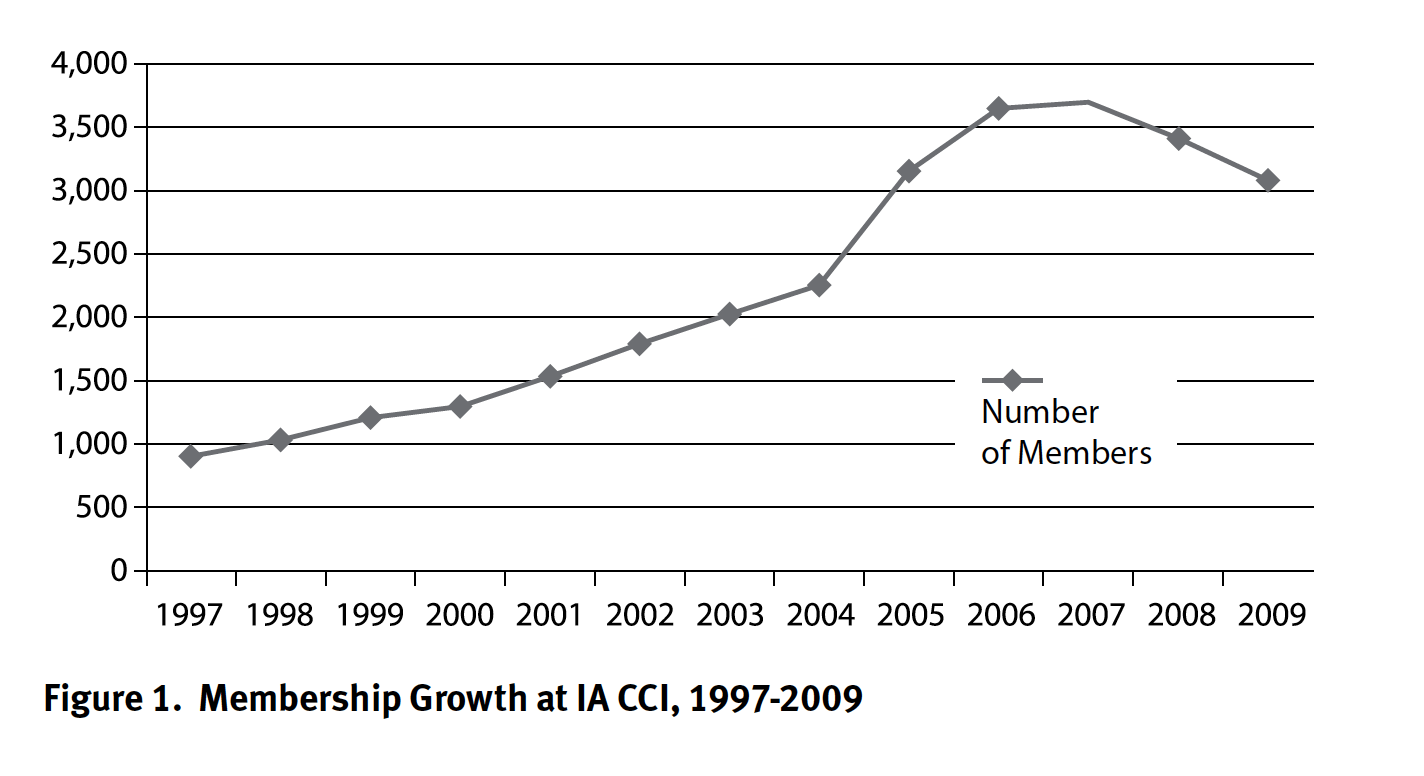 People Power Is the Key

Since 1995, Iowa Citizens for Community Improvement has recruited and engaged more than 3,000 members (see Figure 1) on a wide range of issues. (The recent decline in membership is discussed below.) In addition to factory farming, these include excessive interest on payday loans, reducing corporate influence in politics, and non-payment and abuse of undocumented workers. As member Judy Lonning says, “I’m so impressed with the way we get things done. When we work together, we have tremendous power to advance the cause of justice, and CCI empowers us to stand together on critical issues.”

The group’s philosophy of membership development makes it particularly effective. As Katie Bryan, membership and communications co-coordinator, points out, “Our theory of social change is that the people most affected by issues should be in the driver’s seat. We believe in people power versus staff power.” Member Francisco Contreras adds, “The open line of communication between members and staff is key. Also key is having members be involved in the leadership and planning process.”

Member Growth and Engagement: It’s All About Organizing

Everyone at Iowa CCI understands that increasing their membership and engaging members in meaningful organizing are essentially the same work. Staff ask people to join at every opportunity. In addition to regular mass mailings, the group recruits new members in the following ways:

It All Adds Up to a Big Membership

Through steady growth, Iowa Citizens for Community Improvement doubled its membership to 2,000 between 1997 and 2003. Then it shot up to more than 3,000 members between 2004 and 2007. The significant growth and retention of membership was the result of a very diversified acquisition and cultivation program as outlined in Figure 2, which shows a snapshot of 2008 membership acquisition. Note that organizing-related efforts bring in nearly the same percentage of members as traditional, mass member-acquisition mailings. 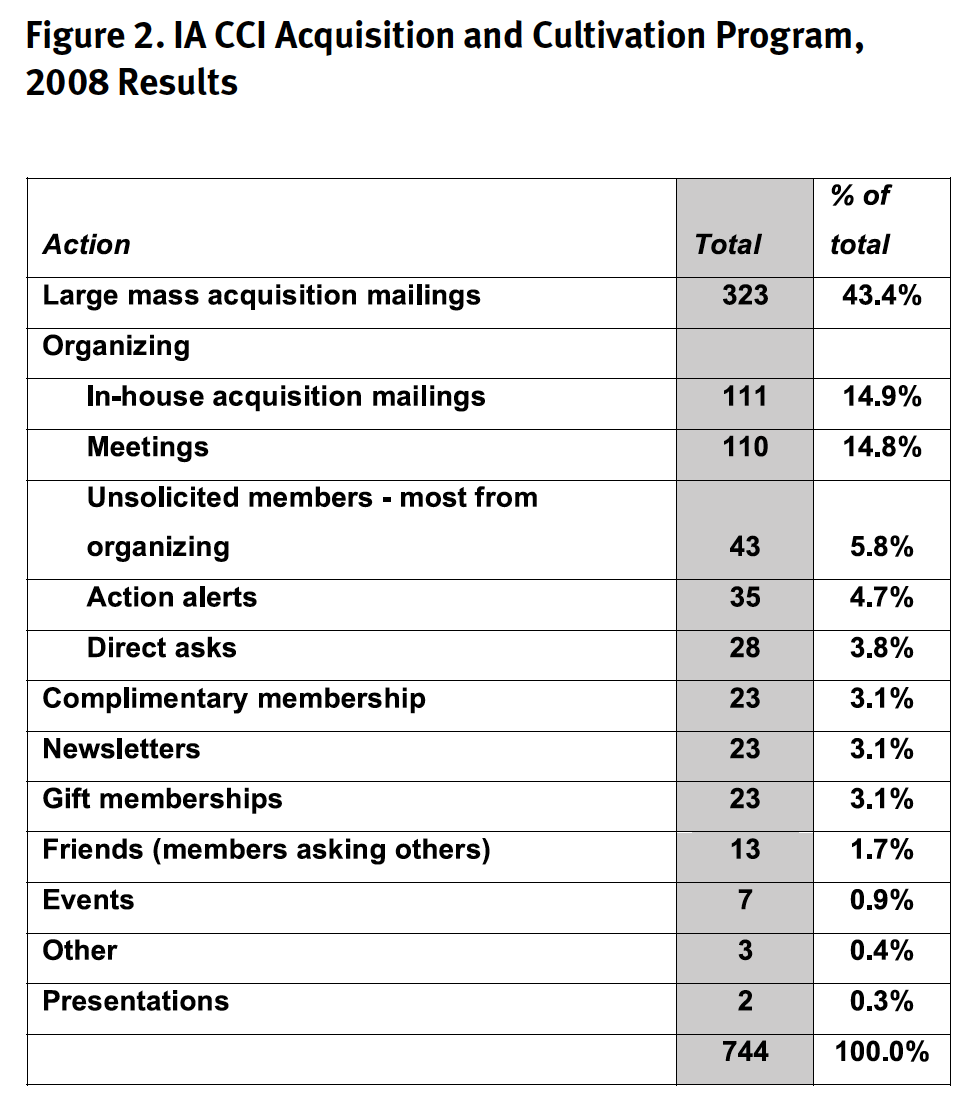 While about 44 percent of new members were acquired from mass direct mail, an equal percentage joined through the group’s organizing efforts. The remaining 12 percent came from a combination of events, organizational communication, and member efforts.

As a result, Iowa CCI is now far less dependent on grants than many comparable organizations. In 2008, they received only half of their revenue from foundations (see Figure 3). This kind of independence is especially important during the current recession, when foundations are cutting back. 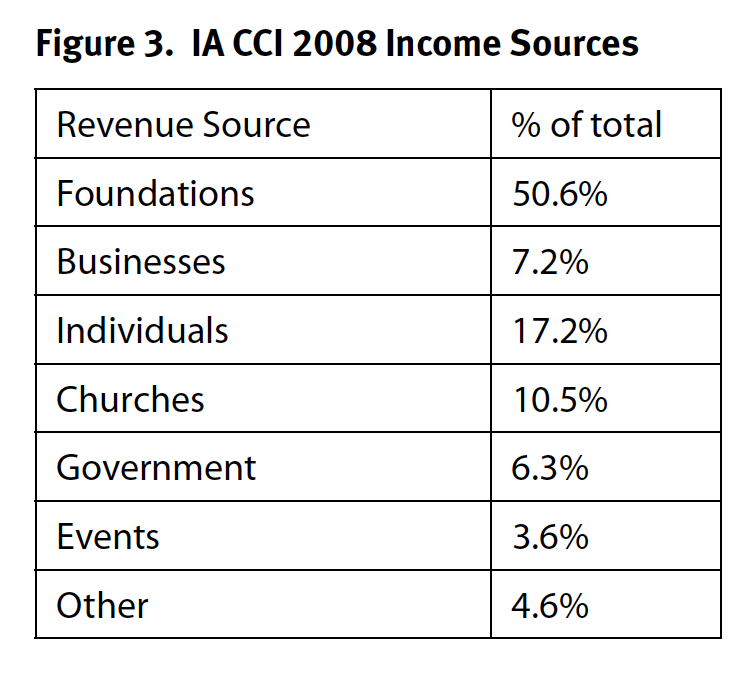 Maintaining and Increasing Membership: It’s Not That Simple

Starting in 2007, the organization noticed that membership was leveling off and then declining. Kristin Schaaf says, “We’d always grown! Seeing a decline in membership was difficult, as we depend on members for winning our issues. We needed to evaluate our tactics.” They discovered a number of reasons that, as the membership grew, it became more difficult to sustain that growth:

Next Steps in Building the Membership

As they look to the future, Iowa Citizens for Community Improvement is emphasizing the following membership-building strategies.

As she reflects on Iowa Citizens for Community Improvement’s membership and organizing successes, Katie Bryan says, “Everything ties back to our organizing work and our reputation as a group that tackles tough issues and gets things done. We don’t let up. The same can be said about our approach to fundraising and building the membership.”

Amy O’Connor (integrated-development.biz) and Andy Robinson (andyrobinsononline.com) are consultants and trainers based, respectively, in Utah and Vermont.

With more than 30 years of nonprofit sector experience as a volunteer, staff person and consultant, Amy has coached and trained leaders in numerous organizations. The areas of expertise where Amy likes to share her experience and make the path for others easier include: strategic planning, comprehensive fundraising planning and implementation, major donor stewardship, and membership recruitment and cultivation. She became the sole proprietor of Integrated Development Consulting, Inc., in 1997 and continues to enjoy providing customized consulting and coaching services to support leaders in small to medium-sized nonprofits.