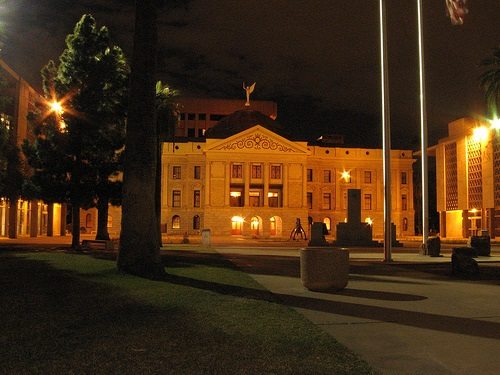 In a relatively close vote, the Arizona House voted to send a bill to the governor’s desk that would allow any church, institution, or individual to cite “sincere religious belief” for choosing not to provide service to a specific class of people. The obvious intent, as one clownish member of the legislature noted by raising a “NO GAYS ALLOWED” sign from the floor in violation of the legislature’s rules, is to permit discrimination against gays and lesbians. Explaining his rationale, Republican state representative Steve Montenegro said, “Please, I will accept you because you are a child of God, I love you because you are a child of God. But please don’t ask me to go against my religious beliefs.” All but three Republicans voted for the bill.

Here is the relevant portion of the text of Senate Bill 1062 as approved by the Arizona legislature:

While the intent of the legislation is obvious, the implications encompass more than gays and lesbians. What about someone who, citing religion, won’t serve women who are unaccompanied by a male relative, or unless they have covered their heads or are dressed modestly? What about someone whose religion sees Jews, Muslims, or Baha’is as somehow objectionable?

Arizona’s legislature may be the first to pass this kind of bill, promoted by a conservative think tank called the Center for Arizona Policy, but legislation has been introduced in at least seven other states, according to the Associated Press story. However, the implications go to motivation.

The legislation defines “exercise of religion” as:

“…the practice or observance of religion, including the ability to act or refusal to act in a manner substantially motivated by a religious belief, whether or not the exercise is compulsory or central to a larger system of religious belief.”

In other words, if you sincerely hold a belief, even if the religion you belong to doesn’t hold to, much less mandate, that position, that’s good enough justification in Arizona for discriminating against gays and lesbians.

We have now reached a point in the U.S. where one’s personal, solipsistic, irrational precepts can be used as legal justification for heinous behaviors that this nation has worked for years to eradicate as violations of civil rights. The latest example of the “belief” defense—in this case, belief of another, non-religious sort—was in the trial of Michael Dunn, charged with murder of 17-year-old Jordan Davis. Dunn was able to cite his belief that Davis was a threat to his safety without a scintilla of evidence that Davis was actually threatening Dunn or possessed a weapon with which to do so, and thereby was able to convince two or three jurors he was justified in killing David in self-defense and should not be convicted of first-degree murder. Fundamentally, what was that belief? Dunn’s perception that the mere presence of young black men playing “loud music” was a threat to him. It was a defense reliant on stereotype in contravention of the facts, in contravention of rationality.

Stand-your-ground laws make belief the basis for choosing to apply deadly force where, in instances like Dunn’s shooting of Davis, absolutely no force or violence was needed—not a single shot, and certainly not ten shots from a pistol fired into the Davis car in two volleys, the second when the car was driving away. The Arizona law allows bigots to couch their bigotry as piety in order to violate the civil rights of other citizens.

If she grasps the implications of this bill fully, its impact on making Arizona look like a state that condones discrimination, Arizona Governor Jan Brewer may be convinced to exercise her veto. But for all of us, gay and straight, black and white, Christian, Muslim, and Jew, we have to stand up against the notion that one’s personal beliefs should be allowed to trump the civil rights—or in Jordan Davis’s case, the very existence—of people who don’t fit those beliefs.

This article has been altered to correct the name of the conservative think tank; it’s the Center for Arizona Policy, not the Center for Social Policy. NPQ regrets the error.