At the Vatican, the Most Secretive Nonprofit Bank in the World 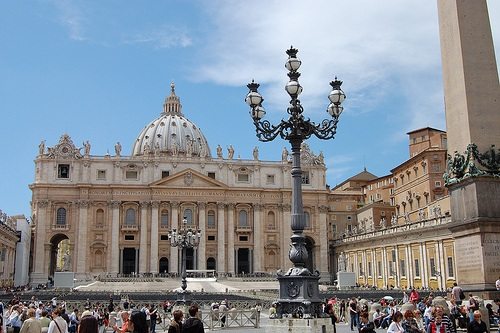 Until the first-ever press visit to the Vatican bank last year, it was “the most secret building in the ‘city of secrets,’” according to John Hooper of the Guardian. It was also the “most secret bank in the world” in the estimation of former U.S. Treasury official Avi Jorisch. The Vatican bank, otherwise known as the Institute for Works of Religion, has 33,000 accounts with about $8.3 billion in assets, operates in 100 countries, and offers the option of conducting financial transactions in Latin, even at ATMs. With its surpluses devoted entirely to religion and charity, it may well be the largest nonprofit bank in the world and it is certainly the most secretive. Some have questioned whether the bank may even have been one of the factors behind Pope Benedict XVI’s stunning decision to retire at the end of the month.

The Vatican bank has been involved in numerous mysteries and scandals since it was established in 1942 by Pope Pius XII to handle the Vatican’s finances. For instance, Roberto Calvi, sometimes referred to as “God’s banker,” was found dead in 1982, hanging from a bridge in London. That homicide case remains a mystery. On the scandal front, the Vatican bank was recently in the news following the arrest of an Italian priest and a Ferrari-driving lawyer who have been charged with defrauding insurance companies and using the Vatican bank to hide the loot.

According to Anthony Faiola, writing for the Washington Post, Pope Benedict has been trying to insert a dollop of transparency into the workings of the Vatican bank without huge success. For a time last month, the government of Italy barred Italian banks from business transactions with the Vatican due to the Vatican’s lack of financial transparency. Because of Italy’s membership in the European Union, it really cut the Vatican and its bank off from doing business with other banks throughout the EU. As a result, until the Vatican found a non-EU financial institution in Switzerland to work through, the Vatican lost access to credit card processing at its tourist sites like the Sistine Chapel.

To his credit, Pope Benedict XVI tried to insert some sunshine into the bank’s operations, but he reportedly ran into a political wall. When the former president of the bank, Ettore Gotti Tedeschi, was fired by the bank, he ominously alleged, according to Faiola, that his dismissal was a result of his getting “too close to the truth.” In one of the last major governmental decisions before he will leave the papacy, Pope Benedict has approved the decision of the College of Cardinals to fill the top Vatican bank post with Ernst von Freyberg, a German lawyer, member of the Knights of Malta, and the founder of a family foundation (Freyberg Stiftung) which supports Catholic groups in Germany, Austria, and France.

According to Faiola, “Vatican observers believe a steady barrage of scandals — not the least of those over financial transparency — took a toll on a formidable theologian, who came to the throne of St. Peter on a mission to reinvigorate the church,” and that this contributed to the Pope’s decision to resign. Faiola says that Italian prosecutors investigating financial crimes encounter the bank’s “haughty resistance to European Union laws” and routinely find their communications unanswered or rejected. In 2010, Benedict issued a papal letter forbidding money laundering and established an independent Vatican watchdog, the Financial Intelligence Authority. Nonetheless, the bank’s dismissal of Ettore Gotti Tedeschi may point to elements of the secrecy of the Vatican that even the Pope himself couldn’t successfully undo.—Rick Cohen