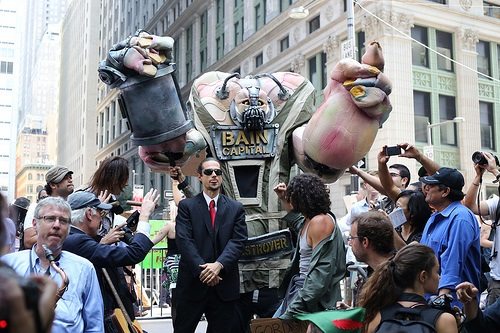 NPQ has written on a number of occasions about the contrasts that can be drawn between nonprofit and for-profit nursing homes and hospices. Long story short, the profit motive shows in the quality of care and the price charged to Medicaid. Now, CRC Health Group, which is owned by Bain Capital, is reportedly assembling an empire of nationwide methadone clinics, what with heroin use being on the rise and all.

It most recently has purchased Habit OPCO, which has 22 clinics in Vermont, New Hampshire, Massachusetts, Pennsylvania, and New Jersey. CRC calls itself the nation’s largest provider of addiction treatment services, and its website says it owns 154 treatment facilities across the country along with eating disorder programs, boarding schools, and wilderness camps.

Barry Karlin, the founder of CRC, is also the chairman and CEO of a national chain of pain management clinics. According to a Salon article entitled “The Dark Side of a Bain Success” from July 2012,

“The CRC acquisition immediately made Bain owner of the largest collection of addiction treatment facilities in the nation. Unlike some Bain Capital acquisitions, which led to massive layoffs, the company’s approach with CRC was to boost revenues by gobbling up other treatment centers, raising fees, and expanding its client base through slick, aggressive marketing, while keeping staffing and other costs relatively low. But that rapid pace of acquisition couldn’t be sustained in the mostly small-scale drug treatment industry alone. So Bain Capital and CRC set their sights on an entirely new treatment arena: the multibillion-dollar “troubled teen” industry, a burgeoning field of mostly locally owned residential schools and wilderness programs then serving, nationwide, about 100,000 kids facing addiction or emotional or behavioral problems.”

The article goes on to detail a truly frightening array of lawsuits and investigations related to the company and its subsidiaries. In the same article, Salon commented on Mitt Romney’s position on such endeavors. Romney was, of course, a principal at Bain, though not evidently involved in the CRC purchase:

“Romney has been outspoken about his belief that for-profit health care companies can flourish only without onerous regulations. ‘I had the occasion of actually acquiring and trying to build health care businesses,’ he said during a primary debate last year. ‘I know something about it, and I believe markets work. And what’s wrong with our health care system in America is that government is playing too heavy a role.’”

R. Andrew Eckert, CEO of CRC, responded to the Salon article in a statement. “Having for-profit, investor-owned treatment centers is a positive thing for our country. Unlike many non-profits or single-owned facilities, we have the geographic breadth and financial stability that enables us to continue to provide these necessary services, even in challenging economic times,” Eckert’s statement said.—Ruth McCambridge