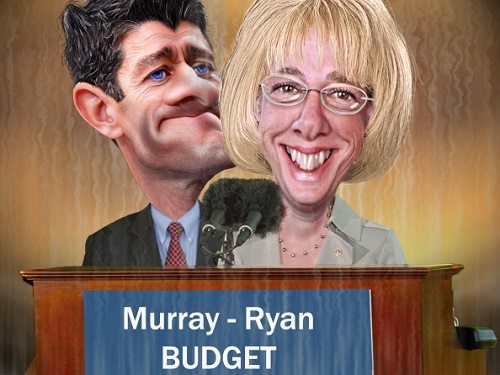 The House of Representatives voted to approve the federal budget deal that is supposed to stave off the semi-annual budget brinksmanship that has been standard operating procedure for Congress and the White House in recent years. It seems to be a small potatoes budget deal, but everyone and their cousin dislikes something in it. Former Labor Secretary Robert Reich’s recent blog posting summarizes the Left’s reaction: “About the only good thing that can be said about the budget deal just patched together by House Republican budget chair Paul Ryan and Senate Democratic budget chair Patty Murray is that the right-wing Heritage Foundation and the Koch brothers’ Americans for Prosperity oppose it.”

The reaction of House Speaker John Boehner to the Heritage Foundation-type opponents of the deal almost puts the Ohio Republican in Reich’s camp. “They pushed us into this fight to defund ‘Obamacare’ and to shut down the government.… That wasn’t exactly the strategy that I had in mind,” Boehner said, referring to the stance of hard-right conservatives leading up to the debacle of this past October. “But if you recall, the day before the government reopened, one of the people that—one of these groups stood up and said, well, we never really thought it would work.” An uncharacteristically animated Boehner then leaned over the dais and yelled, “Are you kidding me?”

There are always potentials for surprises when it comes to Capitol Hill, but the Bipartisan Budget Act of 2013, summarized here, full text (we believe) here, passed the House of Representatives with enough Republicans and Democrats joining together to outnumber the Republicans who might be swayed by the opposition of groups like the Club for Growth. Defending the Rolling Stones’ theory of political compromise that says you can’t always get what you want, Rep. Ryan (R-WI) justified the deal on the Budget Committee webpage with the explanation that it maintains 92 percent of the sequester’s budget savings, with $63 billion in sequester relief for 2014 and 2015, but leaves the sequester intact in the out years of the decade.

The Congressional Budget Office adds that over 10 years, this deal would reduce the federal deficit by $85 billion, though the “net” deficit reduction figure cited for the two-year deal is approximately $23 billion. According to Boehner, “If you are for more deficit reduction, you are for this agreement.”

In a summary of the Left’s criticism of the deal, Reich identifies several points:  the failure to extend unemployment benefits for 1.3 million long-term jobless persons, the failure to “close a single tax loophole for the wealthy,” the failure to undo the sequester, the failure to “restore food stamps to the poor,” the absence of any short-term stimulus, and the absence of anything concerning the nation’s long-term debt. Reich actually thinks that by avoiding the potential of government shutdowns in 2014 and 2015, the deal benefits Republicans politically, allowing them to go into the 2014 elections attacking the Affordable Care Act and avoiding having to explain yet another government shutdown. Rather than supporting the Ryan/Murray deal, Reich prefers another temporary spending resolution.

Nonetheless, on the House side, the budget deal was approved 332 to 94. The “no” votes included 62 Republicans and 31 Democrats. With only 169 Republicans in favor, Boehner and Ryan needed Democratic support to reach the 217 votes needed for approval. The floor debate was spirited, with some Democrats trying unsuccessfully to get the long-term unemployment benefits provision restored. Senate Majority Leader Harry Reid (D-NV), representing the state with the highest unemployment rate in the nation, has pledged to make unemployment benefits his first priority in January. One amendment that did get attached to the bill was a temporary suspension of a reduction of pay levels for doctors who treat Medicare patients.

The opposition wasn’t inconsequential. Although Rep. Gerry Connolly (D-VA) said it was a “hold your nose and vote yes vote,” a number of influential Democrats were in the “no” column, including Jan Schakowsky (D-IL) and Raúl Grijalva (D-AZ), both citing the unemployment benefits issue as their reason.  The Senate vote will be close, with such major Republican leaders as Mitch McConnell (R-KY), Ted Cruz (R-TX), Kelly Ayotte (R-NH), Lindsey Graham (R-SC), Marco Rubio (R-FL), and others already announcing their opposition. They have the latitude to do so because Democrats hold a 55 to 45 edge in the Senate and could pass the budget deal, in theory, with no Republican votes in favor.

Reich offers important points about how extraordinarily limited this budget deal is. His analysis makes House Minority Leader Nancy Pelosi’s (D-CA) advice to House Democrats all the more understandable: “Embrace the suck” and vote for the deal. The Senate will have its opportunity to endorse action this week, or next week at worst because of the continuing problems regarding presidential appointees. The vote is an example of a genuinely bipartisan Congressional action. It is stunning how little the bipartisan comity really yields.—Rick Cohen