Buffer Zones at Abortion Clinics: The Transcript of Arguments 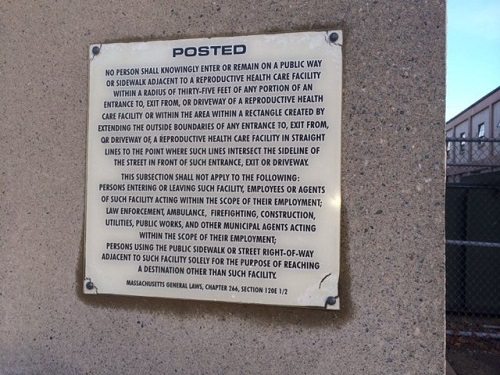 According to some press reports, the Supreme Court Justices appeared “skeptical,” “doubtful,” and “unsympathetic” Wednesday when they heard oral arguments on a case involving a challenge to a Massachusetts law that provides for a 35-foot buffer zone at abortion clinics. The arguments yesterday centered less on whether or not the zone was valid and constitutional as far as free speech was concerned, and more on whether 35 feet is a supportable distance at which to keep protestors. But the case could have more far reaching effects on buffer zones in general.Justice Antonin Scalia said that the “protestor” characterization of those who regularly set up outside of abortion clinics to try to “gently” dissuade women from going in was distorting the debate, saying, “If it was a protest, keeping them back 35 feet might not be so bad. They can scream and yell and hold up signs from 35 feet. But what they can’t do is try to talk the woman out of the abortion. It’s a counseling case, not a—not a protest case.”

And, indeed, Eleanor McCullen, the person who brought the suit comes directly out of Central Casting: a sweet looking older woman who says her intent is simply to provide the unwitting ladies entering the clinic with alternatives.

The question of a buffer zone has come in front of the court before in Hill v. Colorado (2000), when an eight-foot, no-contact zone was upheld, but this decision was made when the court was more liberal and following some horrific incidents at abortion clinics, including the Planned Parenthood facility in Boston that is the clinic that is at the center of the new suit. This organization has written a cogent description of its experience with the run-up to the present law, in case any of you have forgotten the history.

While the Justices seemed for the most part to fall into a predictable pattern, at this point no one wants to predict outcomes because Chief Justice John G. Roberts Jr., widely seen as the swing vote, was largely silent during the proceedings.—Ruth McCambridge