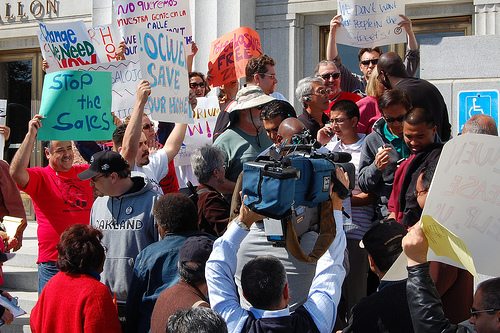 This lawsuit could have been spotted from miles—or months—away. Governor Jerry Brown used $369 million that California had received as part of a $25 billion nationwide mortgage-serving settlement agreement to pay down the state’s debt rather than helping homeowners with avoiding foreclosure. Three nonprofit housing counseling groups have decided to file suit against California, demanding that the money be restored back to its original purpose. The fact that the state is looking at a $4.2 billion budget surplus this year moots the need for writing down the state’s debt.

“We made it clear to the governor at that time that we did not agree with his decision,” said Robert Gnaizda, general counsel to the National Asian American Coalition, one of the plaintiffs in the suite. “But we didn’t want to bring a case when the state was in such an enormous fiscal crisis. With the governor now talking about possible surpluses of up to $10 billion before he finishes his second term, we decided to proceed with our case.” The other plaintiffs are the COR Community Development Corporation and the National Hispanic Christian Leadership Council.

The three nonprofit counseling groups argue that the state actually had no right to divert the money away from the purpose of assisting homeowners. They contend that state law required the money to go into a special deposit fund and only transferred to the state’s general fund “if the transfer does not interfere with the object for which the special fund was created and the transferred amount is repaid when feasible.” At a minimum, with a large surplus on the horizon, the state seems to be in a position to replenish the account.

According to the Times, citing a report from Enterprise Community Partners, as of 2012 about half of the 49 states in the settlement had diverted about $1 billion of the settlement dollars for non-housing purposes.

California is unlikely to take this case lightly. The plaintiffs are represented by Neil Barofsky, the respected and influential former inspector general for the Troubled Asset Relief Program. His firm, Jenner & Block, is working for the plaintiffs pro bono, but will ask the court for fees to be paid by the state if the plaintiffs win.

NPQ has written about this settlement before, noting it to be riddled with holes and gaps that made the $25 billion much less than it appeared and the banks’ implementation of their part of the deal inadequate. California was also hardly alone among states in diverting the funds away from housing-oriented functions. Elsewhere, NPQ noted where states were diverting settlement funds into general fund coffers or other functions, including Alabama, Wisconsin, Missouri, Maryland, Ohio, and other states. It seems logical to anticipate nonprofits in other states filing similar suits, even if they can’t get Barofsky to represent them.—Rick Cohen