“Cavalry Is Not Coming” to Ferguson or Baltimore, Says Bruce Katz

Twenty-six years ago, Bruce Katz was the staff director for the U.S. Senate Subcommittee on Housing and Urban Affairs. That was the time of the riots that followed the police beating of Rodney King. Twenty-six years later, Katz, now the vice president and founding director of the Metropolitan Policy Program at Brookings, compared the nation’s response to what happened in South Central Los Angeles to the reaction to the community reactions in Baltimore after the death of Freddie Gray in police custody and Ferguson after the shooting of unarmed Michael Brown by a white policeman.

Katz recalls that in the early 1990s, the response was one of “congressional leaders and think tanks across the ideological spectrum generat[ing] specific proposals for alleviating inner-city poverty.” This author remembers the same, having been part of an Urban Land Institute team that went to South Central not long after the disturbances to generate detailed proposals for the revitalization of the Vermont Avenue corridor. We were all serious and dedicated to see action happen.

Katz also recalls that the “early 1990s was also a period of action as a Republican president and a Democratic Congress had the courage to reach across the aisle, compromise on disparate solutions, and enact substantive legislation.” He understates the problem by suggesting that today, “Washington suffers from both a paucity of ideas and an atrophying of the legislative will to give and take.”

When Katz talks about the likes of Senators Alan Cranston, Ted Kennedy, Don Riegle, Patrick Moynihan, Chris Dodd, and Paul Sarbanes debating what should be done, it’s obvious that today’s Congress suffers from both a paucity of ideas, as he contends, and a dearth of leadership. These were legislative lions who functioned above the level of the poll-tested platitudes that characterize today’s Beltway types. Katz notes that as a result of these congressional leaders and the Republican president—George H.W. Bush—the nation saw the enactment of public housing transformation legislation, housing mobility vouchers, youth employment initiatives, and inner city empowerment zones. In retrospect these programs can be debated for their utility and impact, but they are substantial programs nonetheless.

If you’ve noticed nothing like that in response to Ferguson, Cleveland, Baltimore, North Charleston, and Staten Island, you haven’t overlooked a surreptitious policy initiative that might have sneaked past your daily newspaper reading. While acknowledging that the Los Angeles riots were bigger and longer than anything that has happened this year (though in a way, the repeated protests in Ferguson have extended over a long period time—remember, the killing of Michael Brown was almost ten months ago), he cites a few specific policy and political reasons for the different national responses:

The reality is that the nation’s functioning legislative machinery has not been functioning working for a long time. The political parties don’t show much interest in real solutions. The thinking about what works to contend with poverty has been replaced with gimmicks and hustlers trying to make a buck with a shiny penny solution here and there, but nothing substantive.

Katz’s summation is sad, but all too true: “Whatever the cause of Washington dysfunction, the message to places like Baltimore and Ferguson that face some of the toughest, structural challenges in the nation is clear: You are on your own. The cavalry is not coming.”—Rick Cohen 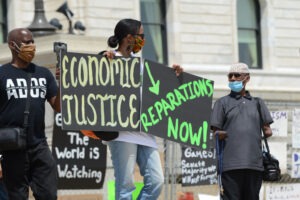 No Equity Framework at Community Foundations