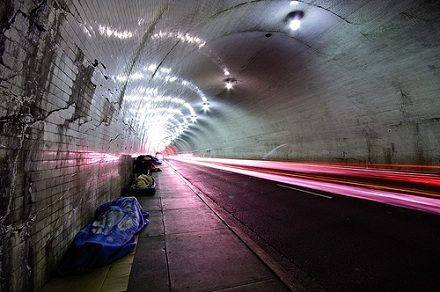 Home for Good, a plan which will devote $105 million to providing permanent housing to people who are chronically homeless in Los Angeles County, was announced last week. Often, as is reported here, the most chronically homeless have severe health, mental health and substance abuse issues that eventually become acute at great public cost. This program is launching with a pool of public and private money from 24 partners and will provide essential resources and health, mental health, and substance abuse services for more than 1,000 people and housing vouchers and rental subsidies for 587 people over the next 15 years. The estimated size of the population of homeless people in the county is 51,000 and approximately one quarter of them are categorized as chronically homeless. This has prompted some concern on the part of service providers who worry that the expense of this program may interfere with serving other segments of the homeless population. For instance, Rev. Andy Bales, who heads the Union Rescue Mission on L.A.’s skid row, worries that “by focusing all the resources on the few, we are leaving the many out in the cold.”

Still, this program does not come out of nowhere. It may be partially based on a program called Project 50, which aimed to find housing for 50 homeless people in Los Angeles that were considered most likely to die on the streets. On the national level, the U.S. Department of Housing and Urban Development (HUD) has largely adopted the “housing first” model as the nation’s preferred homelessness prevention strategy. As NPQ has noted previously, this strategy is already being implemented by some national intermediaries such as the Corporation for Supportive Housing (CSH). In L.A., this program was sparked by the Conrad Hilton Foundation, which has devoted almost $60 million to homelessness—$35 million of which went to supportive housing—in Los Angeles County since 1990. The program also includes a generous portion of public money.

The housing first strategy is widely seen as having the benefit of a good financial rationale. A 2009 United Way study on the costs of homelessness found that it is more than 40 percent less expensive to provide supportive housing than to pay the cost of the public services, including acute care hospitalization, often used by people who are chronically homeless. Another 2009 study, this one prepared for the Los Angeles Homeless Services Authority, found that the average public cost to house an individual in supportive housing was $605 a month, compared to an average cost of $2,897 devoted to a homeless person without supportive housing. –Aine Creedon and Ruth McCambridge