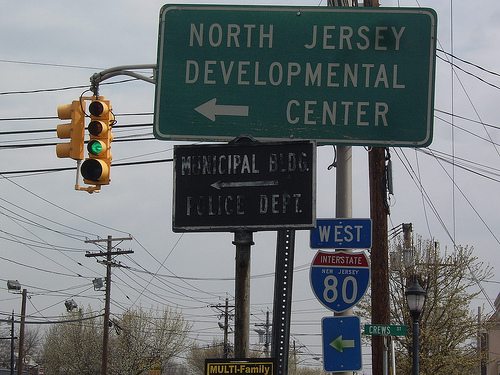 New Jersey is in the process of moving people with serious disabilities out of large residential development centers into smaller, community-based group homes. The first 350 (200 by the end of June and 150 during the next fiscal year) are in the process of moving out of two centers, the North Jersey Developmental Center and the Woodbridge Developmental Center. The North Jersey Center in Totawa will close by June 30th, which some family members of the residents believe is too fast. Other opponents of the closures suggest that the community homes work well for people whose disabilities are not particularly severe, but should be maintained for persons with very serious disabilities.

The NJ Spotlight article describes one of the community homes, operated by Benchmark Human Services in Howell, New Jersey. Two residents, twin sisters Pamela and Donna Barry, have lived in developmental centers since the age of three due to their cerebral palsy. Their mother said she is happy with the services they are getting from Benchmark and with the proximity of Howell to the family home, enabling her to visit her daughters more frequently.

The population of the state’s seven developmental centers was 3,051 in 2006 but has been reduced to less than 2,000. A lawsuit, settled in 2011, charged that the state wasn’t allowing persons with disabilities to live in the least restrictive and most appropriate settings they could, which led the state to cease admitting people to the developmental centers.

Some family members, however, have another concern. Unlike the mother of the Barry twins, they complain that the new community homes are not located in major population centers and therefore will be geographically more distant for most families. Despite the 2011 settlement, some family members are now suing the state to reverse that decision and keep the centers open and admitting.

No social policy decision ever seems to meet with unanimous support. While the state may be reducing and shutting the developmental centers mostly because of a need to comply with the court order, the shift to community homes seems to make sense from a perspective of the needs of persons with disabilities.—Rick Cohen