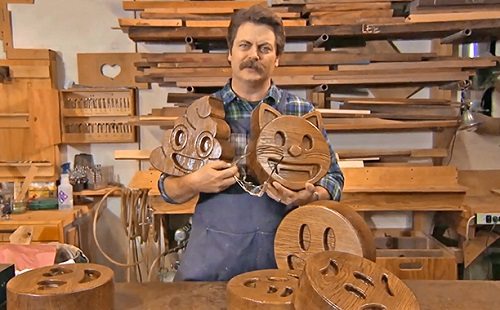 Actor and comedian Nick Offerman is known both on and off the set of TV show Parks and Recreation for his woodworking. So Offerman came on the Conan show in November and participated in a fake infomercial selling handcrafted wood emoji, one foot in diameter and weighing three pounds. The tongue-in-cheek video went viral online, and was an amusing commentary on going against the digital age by bringing us back to a “more old-fashioned, more personal, more American mode of communication.”

The fake infomercial was so successful that the Conan team decided to transform this humorous anecdote into a reality. All proceeds after production and shipping of these “handcrafted and utterly useless emojis” will go to the Children’s Defense Fund. For $100, individuals will receive an extremely heavy “Smiley Face, Heart Eyes, The Wink, The Cat, or the always popular Pile of Poo.”

What started as a fake infomercial just for laughs has been transformed into a charitable initiative through sheer popularity. Anyone who purchases one of these emoji will also receive Andy Richter’s official “Certificate of Reluctant Philanthropy,” which explains that Conan’s announcer and sidekick would have much rather bought a boat with the proceeds.

Conan originally announced that they would manufacture an additional 100 emoji, but since they managed to sell out in minutes, they will be producing a second batch of 500 emoji, with proceeds going to the Children’s Defense Fund once again.—Aine Creedon