Confessions of a Capital Campaign Chair

Editors’ note: This article, first published in print during May/June 2012, has been republished for Nonprofit Quarterly with minor updates.

It’s almost 8:00 pm and I am in my hotel room on day four of a ten-day trip. I have spent the last twelve hours facilitating a fundraising training, returning phone calls, checking email, and wolfing down a couple of unremarkable meals.

There’s a file before me labeled Beth Jacob Synagogue Capital Campaign. I open it with a mild sense of dread. My call list. The good news: so many prospects. The bad news: so few have been contacted. I am way behind. If I start now, I could talk to a few folks—set up an ask meeting for next month, get a pledge or two over the phone. I could check a few names off the list. Wouldn’t that feel good? Or, I could watch something mindless on television. Wouldn’t that feel really good? God knows, I’ve earned it.

I groan, knowing that karma always wins. I spent the day telling people that fundraising is not as difficult as they think. It just requires passion, persistence, and patience. At the moment, I am not doing so great in the passion department, but I pick up the phone anyway. As the Hebrew sage Hillel put it: If not me, who? And if not now, when?

“Mrs. Bernstein? This is Andy Robinson from Beth Jacob—do you have a moment?”

A Capital Campaign, Ready or Not

Let me tell you about our synagogue. Beth Jacob is a small community—about 90 member households—comprised of every sort of Jew, from the very traditional to the very secular. We have four different sets of prayer books, each representing a different branch of Judaism. If you can imagine a church comprised of ten Catholics, five Baptists, some Lutherans and Methodists, a few Evangelicals, three Unitarians, two Quakers, a Mormon, and a couple of people who don’t really care about religion… well, that’s our synagogue!

Founded nearly 100 years ago, Beth Jacob has survived and sometimes prospered, thanks to the work of many volunteer lay leaders and the occasional part-time, circuit-riding rabbi. (We have had a full-time rabbi for just three of the last 70 years.)

I like to think of Beth Jacob as an experiment in grassroots democracy: messy, complicated, nonhierarchical, opinionated, and at times, transcendent.

We occupy a small two-room building on a residential street in Montpelier, Vermont’s capital city. It’s an old house made more tenuous by poor design and deferred maintenance. When it rains, water flows through the basement undermining the foundation. We were advised by an engineer not to use the sanctuary in winter as the roof might cave in after a big snow storm. Well, this is Vermont and we get a lot of snow—so now we’re in the middle of a capital campaign.

I am meeting with a prominent, well-respected member of the community whose involvement as a donor is crucial. He asks many thoughtful questions, such as: Has the entire board pledged?

EVERY GIFT IS AN ACT OF TRUST. WE BETTER DELIVER ON OUR PROMISES.

How much have you raised so far? What are other donors saying? Finally, he says to me, “You know, I gave to the building fund years ago. Nothing happened then, and I am not convinced that it will happen this time. So here’s my offer: I will make an additional pledge, but I’m not writing a check until construction begins.”

I accept, thinking—not for the first time—how every gift is an act of trust. We better deliver on our promises.

I have been raising money for 31 years—as a staff member at five different nonprofits and as a consultant for more than 16 years. But this is my first experience of chairing a capital campaign. It has forced me to rethink some of my assumptions about how fundraising works. Out of necessity, we have ignored several best practices and modified others—with success, because despite the current recession, we have raised more than $495,000.

Below are some of the things we have learned on this campaign:

1. There is no perfect time to raise money, so ask for it anyway.

We began the process with a total of about $150,000 from our existing building fund, a surprise bequest, and a large anonymous pledge—all very encouraging. Less encouraging was the state of the congregation, perennially divided over a variety of issues: modes of worship, membership dues, the need (or not) for a full-time rabbi, compulsory donations for admission to High Holiday services (unlike Beth Jacob, many congregations require them), and of course, the Israel/Palestine question, which divides Jewish communities around the world. Had the synagogue hired me as their fundraising consultant, I would have advised against launching this campaign until the community was more united and confident. Unfortunately, given the sorry state of the building, waiting for a better moment was not really an option.

2. If you don’t believe you can raise all the money at once, get creative.

After much research and many congregational meetings, we decided to rebuild in our present location. Not the cheapest option, as the site has drainage problems and adjacent buildings. The estimated cost was over $600,000—a scary number for a small congregation.

We brainstormed and debated and developed a creative solution: we would structure the campaign in two phases, rebuilding each half of the synagogue as we raised the needed money. Phase 1 (about $350,000) would focus on reconstructing the foundation, basement, and sanctuary, since those parts of the building posed the greatest risk and also the greatest opportunity. We predicted that seeing the beautiful new space with its vaulted ceiling and skylights would inspire the congregation to give again. In Phase 2 (about $300,000), we would reconstruct the community room, kitchen and bathroom, and landscape the property.

3. The classic campaign model is great, but reality is often different.

In the traditional model, a team of volunteers supported by professional staff do the asking over a predetermined period of several months; donors are allowed to fulfill their pledges over several years. This model was not applicable to us.

Beth Jacob has no staff (other than part-time program manager and bookkeeper) available to manage a capital campaign. And while we have a pool of volunteers available to do other tasks, the asking fell to myself and the board chair, a supremely organized person who began this process with no experience but has blossomed into a formidable fundraiser.

It is now four years since the campaign commenced—so much for “time limited”—and we continue raising money. As we ramp up for Phase 2, we intend to increase the number and frequency of asks.

4. If you think you know all your prospects, think again.

The Beth Jacob community consists of about 90 households, yet we have over 200 donors to date. Who are these people? Friends, family, neighbors, members of other congregations, and a number of people who identify as Jewish but choose not to join or affiliate. Several non-Jews have also contributed to honor a friend or help us meet our challenge gift goal. Furthermore, some of our largest gifts came from members who are only peripherally involved. As one $25,000 donor told me, “Other than the High Holidays, you are unlikely to see me, but I want there to be a synagogue in this town.” To successfully complete Phase 2, we need to reach even further beyond our base.

Early in our campaign, the lead donor family offered to increase their contribution by $15,000 if we could recruit 30 new donors in 60 days. The intention was to increase participation, since gifts of any size would count toward the challenge. As a solicitor, I found the challenge very motivating because: (a) it gave us another pitch for the campaign (“Your gift gets us closer to the $15,000…”); and (b) it gave us a deadline. Many first-time donors were recruited through this challenge, which we met successfully.

6. Be selective about the details you obsess over… and let go of the rest.

In addition to prospecting and asking, I have focused on ensuring that donors are thanked and given updates, and all recognition requirements and naming opportunities are faithfully fulfilled. I have not spoken to the press or spent much time thinking about construction matters because other people are tending to those details.

7. Having a plan is important but having faith in it is even more important.

Several synagogue board members—thoughtful, intelligent, and committed people—were skeptical about our campaign for a variety of reasons, most of them legitimate. Even with all the planning, they feared we would fail.

A skeptical asker, alas, is a lousy asker. Even an enthusiastic asker backed by a skeptical board is operating from a weak position. Once you make the decision to launch a campaign, everyone has to be “all in.” To the credit of the Beth Jacob board, when we jumped in, we all did it together.

8. Persistence trumps all other virtues.

When you count the community meetings, campaign planning sessions, design work with the architect and contractor, the mailings, phone calls, donor meetings, and news conferences, this project has taken about five years and will likely take another three to complete. Not the ideal schedule, but you have to play the cards you are dealt—and we are in the middle of a marathon game. As author and fundraising trainer Kim Klein notes, “If you ask enough people, eventually you’ll raise all the money you need.” We will keep asking until we reach our goal.

9. Ultimately, fundraising is more about community than money.

Yes, Beth Jacob is getting a better building, but more important, we have created a more resilient network of members, friends, and allies. The process brought us together; our success has made us stronger.

It Ain’t Over Till It’s Over

It’s Rosh Hashanah, one of the holiest days of the year. I stand before the congregation trying to sum up four years of work in two minutes.

“We did it!” I say. “Phase 1 is over and the sanctuary is nearly complete. I am so proud of us. We did something very difficult, and we did it well.”

I’m feeling a bit more emotional than expected, but I push on. “We begin Phase 2 this fall. If you’ve already given, thank you. Please understand that we will approach you again. We will ask with respect and humility, but we will ask.

“If you haven’t yet given, congratulations—you’re about to get another opportunity. And if you’re unable to give, support us with your time, your thoughts, and your prayers—we need those as well.

Andy Robinson (andyrobinsononline.com) is a consultant, trainer, and author of several books, including How to Raise $500 to $5,000 From Almost Anyone. You can learn more about Beth Jacob Synagogue at bethjacobvt.org.

"Andy Robinson (www.andyrobinsononline.com) provides training and consulting for nonprofits in fundraising, board development, marketing, earned income, planning, leadership development, facilitation, and train-the-trainer programs. He specializes in the needs of organizations working for human rights, social justice, artistic expression, environmental conservation, and community development.Over the past 25 years, Andy has worked with nonprofits in 47 US states and Canada. He is the author of six books, including Train Your Board (and Everyone Else) to Raise Money, www.trainyourboard.com. His latest is What Every Board Member Needs to Know, Do, and Avoid. He lives in Plainfield, Vermont."

Planning a Capital Campaign (Part I)

Testing the Feasibility of Your Capital Campaign (Part III)

The Phases of a Capital Campaign (Part II)

The Public Phase of Your Capital Campaign (Part IV) 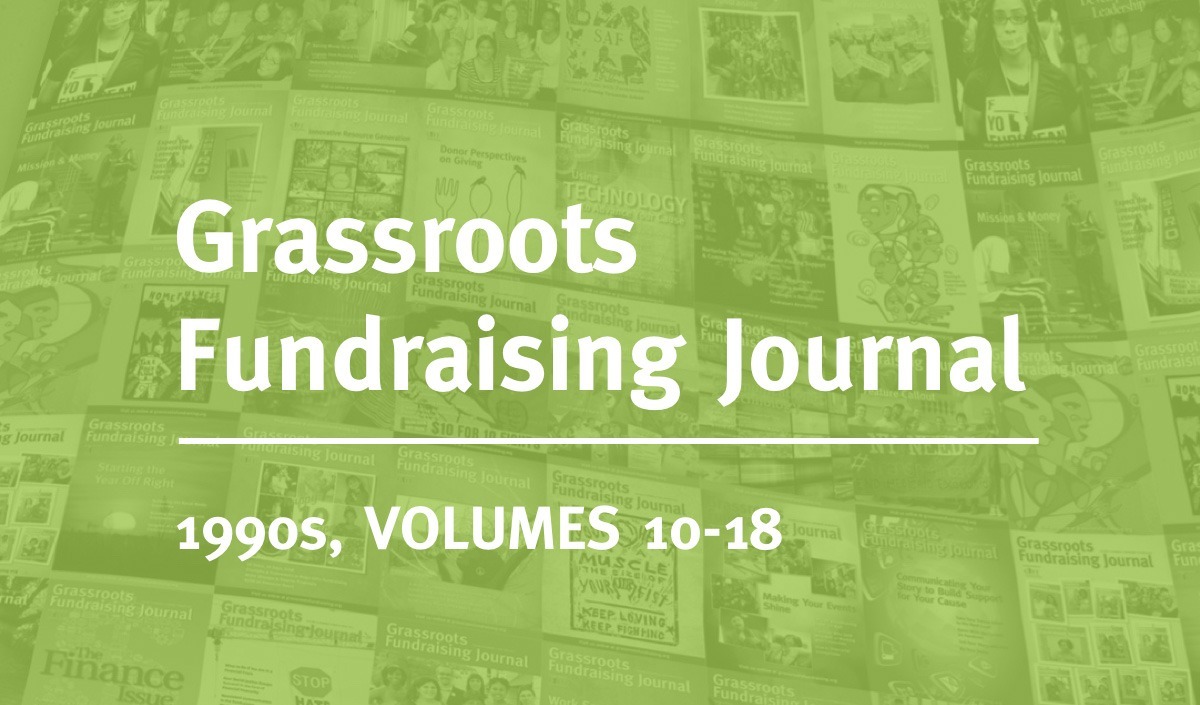 Everything I Know About Fundraising I Learned Knocking on...