Confronting the Health Impacts of Gentrification and Displacement 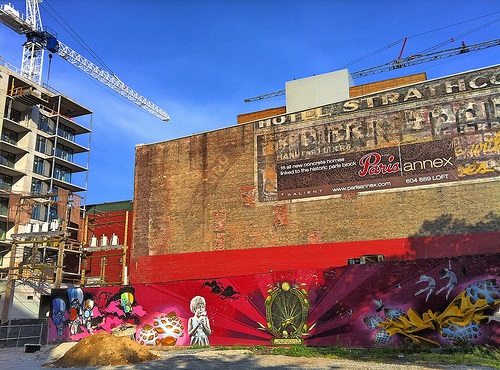 Some communities can accommodate gentrification somewhat due to their large numbers of vacant homes waiting for urban pioneers to move in and fix up. But in Alameda County, California, composed largely of the cities of Oakland, Berkeley, Fremont, Alameda, and Hayward across the Bay from San Francisco, gentrification just about always means the displacement of lower income, moderate-income, and even middle-income families by much more affluent households.

Most studies of gentrification and displacement address the housing implications: lower-rent apartments replaced by high-rent ones or by expensive homes and condominiums. With little happening at the federal government level to stimulate affordable housing production and even less discussion of affordable housing by national political leaders and candidates, the housing dimensions of gentrification in an area like the East Bay are tough enough.

In the Bay Area overall, a major source of the displacement from gentrification is due to the influx of high tech workers. Davis’s concern for the public health dimensions of displacement comes at the same time that the nonprofit advocacy group Causa Justa/Just Cause released a study of gentrification in the Bay Area. Neither the name of the report, Development without Displacement, nor its theme is new. Marrying needed (or unavoidable) real estate development with programs that maintain the stability of existing neighborhoods has long been an issue in the Bay Area and throughout the nation.

In 2009, “Development without Displacement” was the title of a report produced by the Association of Bay Area Governments (ABAG) and the nonprofit think tank PolicyLink. That report called for “health impact assessments” tied to development plans that would “minimize adverse health outcomes that can be associated with development.” The adverse health impacts of residential displacement have even been recognized and explored by the Centers for Disease Control and Prevention, which summarized them as follows:

“Displacement has many health implications that contribute to disparities among special populations, including the poor, women, children, the elderly, and members of racial/ethnic minority groups. These special populations are at increased risk for the negative consequences of gentrification. Studies indicate that vulnerable populations typically have shorter life expectancy; higher cancer rates; more birth defects; greater infant mortality; and higher incidence of asthma, diabetes, and cardiovascular disease. In addition, increasing evidence shows that these populations have an unequal share of residential exposure to hazardous substances such as lead paint. Other health effects include limited access to or availability of the following: affordable healthy housing; healthy food choices; transportation choices; quality schools; bicycle and walking paths, exercise facilities, etc.; [and] social networks.”

“Long-time neighborhood residents commonly develop deep social ties and strong social support networks within the community. When the neighborhood and social connections therein are broken up, this ‘social loss’ creates excess stress and psychological effects, which in turn have effects on physical systems that we rely on for resilience against disease and chronic conditions. Cultural institutions, culturally relevant businesses and a general feeling of having a place in the city to call home provide many social and health benefits beyond the face value that we often find in the gentrification debate.”

It isn’t quite clear what Davis’s Public Health Department is calling for in its new initiative on the health impacts of displacement other than examination of the health impacts of housing developments, much like ABAG and PolicyLink recommended in their 2009 report. But where are the examples of health impact assessments in development projects that have resulted in positive health outcomes for the lower-income and working-class neighborhoods that are usually impacted by gentrification? For example, the Centers for Disease Control promoted and funded 34 health impact assessments between 2006 and 2012, but they seemed to have more of an emphasis on community design considerations and less on the social policy issues associated with the destabilization and displacement of existing neighborhoods.

An example of a health impact assessment that appears to have had an emphasis on the issue of displacement is the report prepared for the Los Angeles Community Action Network on the health impacts of the proposed development of a new football field in downtown Los Angeles. According to the Center for Community Change, the Network used the report in a campaign to negotiate commitments from the developer, including $15 million for affordable housing, $5 million for parks and open space, a commitment for local hiring, and funding for a community team to promote health and to protect tenant rights.

Is the Alameda public health department suggesting that it will be willing to square off against the county’s housing and economic development authorities to argue for concessions meant to oppose displacement and counter gentrification’s adverse health consequences? And what about the “natural” gentrification that occurs, especially in the Bay Area, as high tech workers flood into the region and bid up rents and home values beyond what local residents are likely to afford? What health impact assessment will take aim at market forces and what would a public health department do to counter those dynamics?

Gentrification and displacement are tough issues, much discussed at the neighborhood level, given lip service at best in political circles, and based on the numbers of families being priced out in hot markets like Alameda County, difficult to overcome—in housing terms or in health terms.—Rick Cohen