Nonprofit organizations are affected by economic conditions, and the recent report on consumer debt from the Federal Reserve Bank of New York includes unsettling news. Total consumer debt—student loans, cars, mortgages, credit cards, etc.—is at a record $12.7 trillion. American personal indebtedness hasn’t been at this level since 2008, at the beginning of the recession. It also represents a tripling of total debt since 1999. 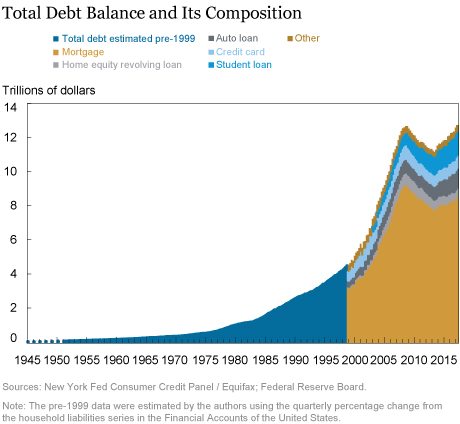 According to the Wall Street Journal, “Job gains, economic growth boosted households’ income and willingness to borrow” contributed to current indebtedness levels. New York Fed economist Donghoon Lee said, “This record debt level is neither a reason to celebrate nor a cause for alarm.”

Perhaps. The news is decidedly mixed. Mortgage debt is down $667 billion since 2008, largely due to fewer subprime mortgages being issued or held by banks and other investors. Of course, this means that many people lost their homes during the recession when they couldn’t pay their mortgages and that access to new mortgages requires better credit scores than in decades past, presenting a barrier to many potential homeowners.

Mortgage debt is at least debt secured by an asset. Student loan debt has increased by $733 billion since 2008 and auto loan totals have increased by $388 billion in the same period. Credit card debt is unsecured, and auto loans, while technically tied to the auto as an asset, are typically “upside down,” with the loan balance remaining being more than the declining market value of the car being financed. For those who lease their vehicles, there is no asset value against which to balance their lease payment obligations.

Even when cast as investment, such as in a home or higher education, debt represents risk and vulnerability for borrowers. Almost 500,000 individuals declared bankruptcy in 2016, according to the American Bankruptcy Institute. Almost two-thirds of Americans can’t weather a $500 emergency without borrowing or cutting back on other spending. Living paycheck to paycheck has become a cliché, but it’s all too real for many Americans, and missing one paycheck has the potential to turn a nonprofit’s small donor into a client in need.

As for consumer belief that the economic future is brightening, there are nonprofit organizations that might disagree. Homeless advocates and food pantries see an increasingly large percentage of families (as opposed to individual adults) in need of services. Even families well above the federal poverty line feel recurring economic distress. Last month, CBS News reported on “The United States of Insecurity,” including statistics showing that 32 percent of households with annual income more than twice the poverty level spent at least one month with income below the federal poverty level. Rachel Schneider, a coauthor of The Financial Diaries, said, “It’s not being able to pay all their bills, not being able to afford their groceries, having to think about putting gas in the car, having to think about whether to cancel their cable. When you work full time and still have that experience, it feels unfair.”

Nonprofit professionals know that general economic conditions affect everything from demand for services, to employment costs, to large-scale donation trends. Seeing the New York Fed’s recent report on consumer debt is a reminder that economic stability—for our potential clients and for our organizations—isn’t as stable as we might hope.—Michael Wyland