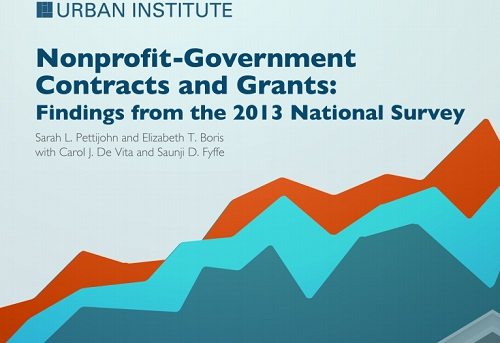 Stepping Stones of Rockford already has an important job to do in running group homes for adults with mental illness, but the state of Illinois’s refusal to pay its contracts on time has added complexity and stress to its work. The agency first had to deal with Illinois’s late payments to nonprofit contractors in 2007, borrowing money to make payroll while it waited for the state to fulfill its payment obligations. Since then, Stepping Stones has had to repeat that practice while Illinois continues to lead the nation in backlogged payments. Agency director Stephen Langley says that the delayed payments add up, forcing the nonprofit to decide which bills it can pay and which it will delay, turning “the 50-year-old mental health organization into a reluctant deadbeat itself.” Explain that to the clients of safety net service providers that find themselves simply trying to “scrape by” to maintain vital services.

A study released by the Urban Institute, conducted in partnership with the National Council of Nonprofits, examining the government contract and grant experience of nonprofits in 2012 largely reaffirms the results of a similar analysis three years earlier. The Urban Institute study counts 55,702 public charities with government contracts, human services nonprofits comprising somewhat more than half of that number with a median level of grants and contracts of $387,732. Typically, nonprofits are managing a number of grants and contracts from different government agencies.

All too often, nonprofits are dealing with continuing problems of governments delaying payments, changing contract terms, and owing hundreds of thousands of dollars for work already done. While there has been some improvement since Urban’s study of conditions in 2009, the impacts of state government grant and contract practices continue to be troubling for nonprofits like Stepping Stones and others:

The news here is really about where the problem is and what is being done to solve it. Tim Delaney of the National Council of Nonprofits suggested that the action is at the state level, and the numbers bear him out. Compare the average amount owed by state governments to nonprofits in this survey ($200,458) to the amounts owed by the federal government ($108,500) and local government ($84,899). The centripetal pressure for nonprofits dealing with grand and contract problems is the behavior of state government agencies.

For that reason, at the presentation of the study findings at the Urban Institute on December 5th, Fran Barrett, Governor Cuomo’s Interagency Coordinator for Not-for-Profit Services, described the actions that New York State is taking to resolve some of these problems focusing on contract reform: a common contract for all state agencies, moving most of the nonprofit contracting process online, putting key nonprofit documents required by different agencies into a cloud-based “vault,” establishing a prequalification process for applying for state grants and contracts, and working on new initiatives on reducing late payment backlogs, creating nonprofit “concierges” for nonprofits in the state government, and establishing online contract tracking services. Barrett’s litany of changes in New York State’s nonprofit practices underscored Delaney’s observation that fixing the grant and contract problem is an administrative issue, not a political issue, and open to technical fixes.

Nonetheless, Barrett noted the intersection of politics and administration. Her position is cabinet level, so she has regular access to Governor Cuomo. She noted that the ability of New York State to make some of these changes was due to the commitment of the governor. “If you don’t have the attention of the top leadership,” Barrett said, “it will be hard to get any traction” for the kinds of changes needed to fix the nonprofit/government contract problems.

However, there is a political dimension that goes beyond the administrative fix. “It is important to recognize that all of our governments are starving, all of the dollars are dropping,” Delaney said. “Governments are in survival mode shifting responsibilities to nonprofits in order to fill the gap.” One of the successes of the Council of Nonprofits in responding to the information generated by the Urban Institute three years ago has been its efforts to convene nonprofits and governmental officials to the same table for dialogue around these problems. The proportion of nonprofits reporting improvements in contract and grant conditions may be partly attributable to the efforts of the Council as well as its member state nonprofit associations.

But the political dimension is in the continuing financial challenges faced by federal, state, and local governments. The sequester exists and is on the table to continue next year. The federal stimulus funding that helped many states through the depths of the recession is over, with impacts that are starting to be seen in state spending cutbacks. And John Jackson, the senior vice president and COO of Catholic Charities USA (CCUSA), added that despite the improvement in national economic conditions, many social needs haven’t abated. Nonprofits are still responding to community needs reflected in high unemployment and underemployment, as well as persistent levels of deep and intractable poverty. Responding to increasing needs without increasing levels of funding, states do exactly what the Urban Institute reports describe—delaying payments, cutting service cost coverage, and limiting or eliminating administrative reimbursement. With the continuation of the sequester and the end of the stimulus dollars coinciding in 2013, states could retrench on grantmaking and contracting improvements if they feel financially squeezed.

A truly troubling issue is the propensity of many governmental agencies to require nonprofits to come to the table with matching funds. It is, put in another way, a government-mandated form of cost sharing, requiring nonprofits to find and secure external resources in order to qualify and land government funding. The little secret among many nonprofits is that big matching-grant requirements for programs are virtual warning flags telling them not to bother to apply. The panel discussing the Urban report toyed with the notion that foundations or other private dollars could be sought to fill in the gaps in shortfalls of administrative funding, cost sharing, and matching grants, though the panelists largely dismissed the notion out of hand. Barrett noted the increasing trend that “foundations make up initiatives and then want people to fit into them,” hardly a recipe for turning to foundations to fill gaps. Moreover, the other secret is that foundations are often working with governmental agencies crafting and co-authoring matching grant requirements, structuring programs such as the Social Innovation Fund and the Promise Neighborhoods program to be available only to nonprofits that come to the table having been largely preapproved for large foundation dollars.

That leads to a dynamic that is evident in the Urban Institute report and in the comments of the panelists, that the nonprofits best able to weather these grant and contract challenges and obstacles are the larger nonprofits. They are more likely to have reserves to draw on, more likely to be able to secure lines of credit and bank loans, and more able to “shuffle” resources while governmental agencies deal with their payment-making shortfalls. Of the nonprofits working with government, almost half (47 percent) had budgets of $1 million or more (compared to around 15 percent of all nonprofits). Barrett mentioned that her office is conducting a risk analysis to explore the idea that some nonprofits might simply be too small to take on the complexity and risks of government grants and contracts.

CCUSA’s Jackson, however, described the Catholic Charities model, which reflects service delivery by networks of linked nonprofits; in this instance, nonprofits united under the Catholic Charities banner. In some ways, that deals with the government challenge of threshold scale needed for successful government grant and contract management, but it is worth noting that Catholic Charities itself is a huge nonprofit—the largest private network of service providers in the nation, ranked by Forbes in 2013 as the fifth largest nonprofit in the nation, with $1.447 billion in private support and $4.393 billion in total revenues. Individual Catholic Charities entities themselves are huge: in Chicago with revenues of $166.5 million; Baltimore $99 million; Boston $36.7 million; Trenton $42.6 million; New Hampshire $65.3 million; Syracuse $48.4 million; and St. Paul and Minneapolis $49.2 million, to name a few. Although large charities like Catholic Charities are more likely to report having suffered from governmental late payments, they also have the wherewithal to be able to survive them, at least more wherewithal than smaller nonprofits.

When nonprofits find themselves competing for government grants and contracts, sometimes facing off against for-profit bidders, on face value, the playing field looks equal, not favoring one or the other. However, another of the widely known secrets that Delaney shared in the panel discussion is that government grant and contract procedures are increasingly “rigged” to favor for-profits. He reported that he has received calls from nonprofits saying that they are no longer bidding on government grants and contracts because of this. State agency administrators will tell nonprofits that they must have levels of working capital that typically are only available to larger nonprofits or to for-profits. When states make late payments, they will often pay for-profits the money owed plus accrued interest. When governments strike deals with for-profit vendors, they don’t, as Delaney noted, ask Lockheed and other big corporate contractors to engage in cost sharing.

Given the similarity of the 2012 findings to the 2009 statistics, the National Council of Nonprofits shifted the discussion to focus on solutions and distributed a paper outlining a dozen “common sense solutions to government-nonprofit contracting problems”:

These are all logical, administratively feasible responses to the problems outlined in the Urban Institute report. However, they require advocacy from the nonprofit sector, monitoring and reporting on government policies and procedures and taking them to task when necessary. For example, the upcoming shift of contracting in Kansas for services to the developmentally disabled from networks of nonprofit providers to three large, national for-profit health insurers merits close attention, but the same kind of scrutiny should be applied to smaller shifts of state policies that put nonprofits at a disadvantage against better capitalized for-profits. Moreover, nonprofits will have to come to the table with governmental agencies, especially state governments, to develop not only solutions to grant and contract procedures, but to grant and contract financing. Otherwise, nonprofits and governments will find themselves fixing and honing a system that leaves service providers with less support to address critical social problems, leaving more and more people outside the government-nonprofit safety net.

In the end, the problems are festering and require consistent advocacy. In fiscally devastated Detroit, a number of nonprofits, like the Coalition on Temporary Shelter (COTS), are unfortunately long accustomed to annual delays in receiving their Community Development Block Grant payments from the City. But since the initiation of bankruptcy proceedings, “this is the first year we [were] actually a little nervous about being able to collect on it,” said COTS CEO Cheryl Johnson. COTS and other nonprofit grant and contract recipients, such as the Gleaners Community Food Bank of Southeastern Michigan, Adult Well-Being Services, and the American Red Cross of the Southeastern Michigan Region, are now considered Detroit’s creditors. Given the problems faced by nonprofits around the country trying to collect on grant and contract payments they are owed, the U.S. has a large population of nonprofit creditors waiting for administrative—and political—fixes to this knotty problem.