Contracts with Board Members: A Working Model

Editors’ note: This article, first published in print on February-1998, has been republished for Nonprofit Quarterly, with minor updates.

Herding cats doesn’t begin to describe what it can be like to coordinate board fundraising. To me, it often feels like trying to simultaneously herd cats, birds, and fish toward the same corral, all of them moving at different speeds and with varying levels of interest and motivation. On any given nonprofit board of directors, you might find people with no experience in fundraising and people who do it for a living. Some board members will have lots of time, others are extremely busy. During the five years that I served as the Development Director for the International Gay and Lesbian Human Rights Commission (IGLHRC), the organization used three strategies to successfully maintain 100% board-member participation in fundraising.

The pledge form was my opportunity to get a specific and concrete commitment from board members. I developed the form with the executive director and some members of the board. The form evolved from a very simple document with one blank for a personal giving pledge to the more complex version shown here. We altered the form over time for two main reasons: to show the full range of the types of contributions board members could make and to concertize their annual commitments.

The form was designed to assist board members in thinking carefully and realistically about the various commitments they could make to the organization during the year. I encouraged people to promise only what they could really do and not to be overambitious. I found it to be essential to have people sign and date the form to reinforce the seriousness of their commitment

The version of the form shown here reflects one of participation in fundraising there must be a range of ways for people to participate. Board members have vastly different levels of expertise and interest, and the time they have to do fundraising varies from year to year as their lives change. Some people will do a great job with getting friends to attend a house party, others are savvy about asking for major gifts. If board members self-select the types of fundraising that they feel they can do, they are more likely to keep their promises.

An atmosphere on the board that supports fundraising is just as important as having a good pledge form. When people joined the IGLHRC board, they acknowledged in writing that they understood that one of their duties was fundraising. The pledge forms were filled out during the first board meeting of the fiscal year and at this time the board co-chairs would encourage everyone to push themselves in both raising and giving funds. We made an effort to conduct fundraising trainings about once a year during board meetings, and sometimes we held discussions where people could speak about the successes and pitfalls of their fundraising efforts. The leaders of the board talked openly about their own pledges and gave other members verbal encouragement throughout the year. Board members who were less experienced in fundraising could choose to pair with a more experienced person to learn how to do donor solicitations.

As the development director, I tried to provide as much logistical support as I could for board fundraising. This included providing template letters for those who were soliciting funds from their friends and colleagues by mail, doing the actual mailing if they didn’t have time, and coordinating most of the logistics of house parties they were hosting (creating and mailing invitations, setting up a host committee, etc.). I also developed handouts on how to write a fundraising letter, how to give a pitch at a house party, and how to solicit donors verbally. At the beginning of each fiscal year, the development department would update the Frequently Asked Questions document so that board members would always have fresh information about the organization’s work at their fingertips. If there were particular themes that we wanted to emphasize in fundraising during a certain time, we would also put those in writing.

Even those who make promises with the best of intentions sometimes require nudging to fulfill them. While board members’ individual pledges were confidential, I made a written and verbal report at each board meeting that detailed progress made toward the board’s total giving and raising copy of their own pledge form, since there were always some people who would forget the commitments they had made. I would encourage board members to specify exactly when they planned to do their fundraising activities and would do my best to start nudging them by e-mail and phone in the months and weeks prior to that time to give them enough time to prepare and plan properly. Finally, each person on the board development committee was assigned a few board members with whom they kept in regular touch throughout the year. This connection was designed both to remind board members of the work they had pledged to do and to support them in their fundraising efforts.

In the end, what really matters is that each member of the board is participating in fundraising in some way, both by donating money themselves and by asking others for money. As the coordinator of board fundraising, my goals were to help board members stretch themselves as fundraisers and as donors, and to give them concrete tools to make fundraising easier and less intimidating than they might imagine it. The pledge form is an invaluable tool in facilitating successful board fundraising. 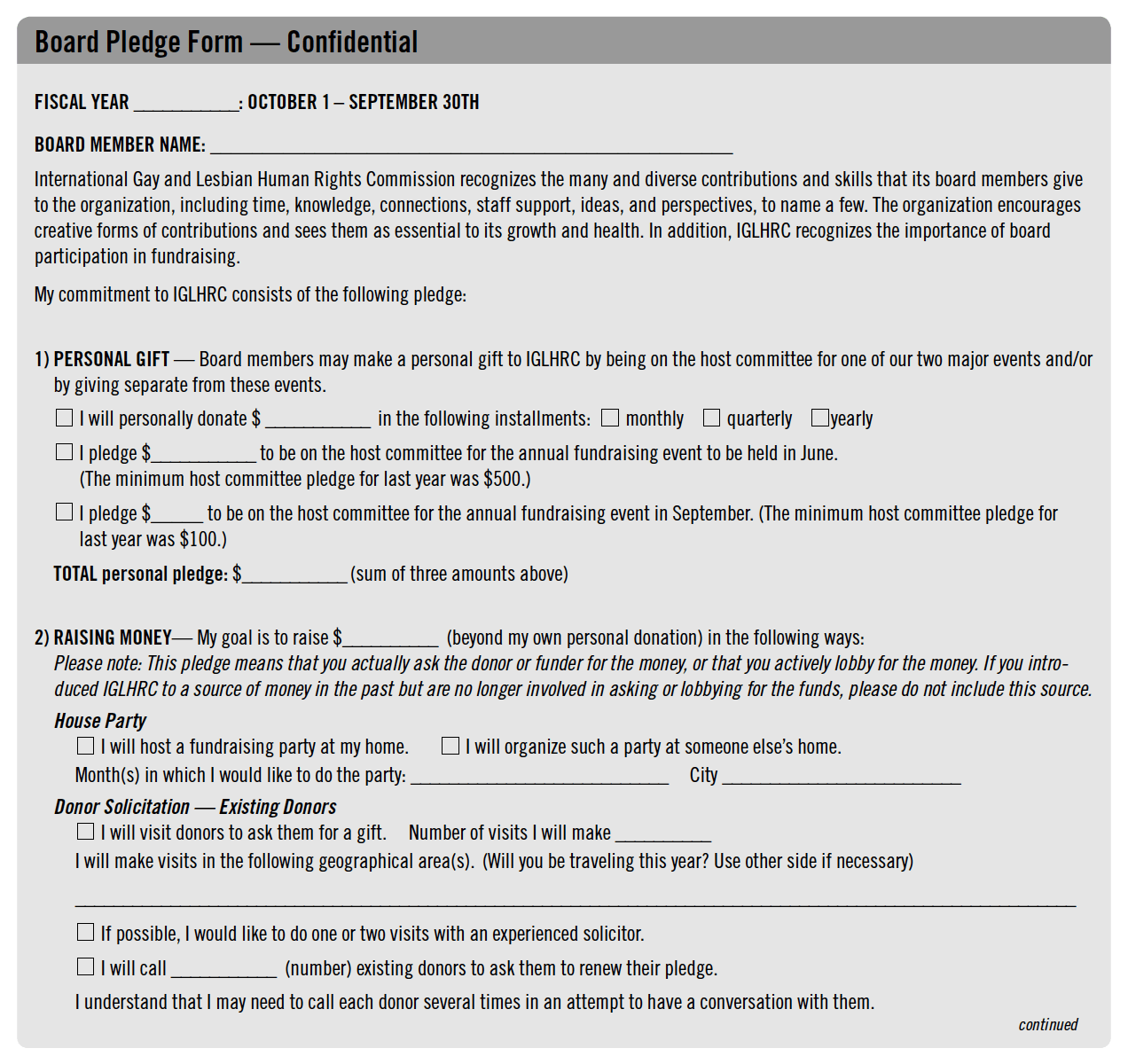 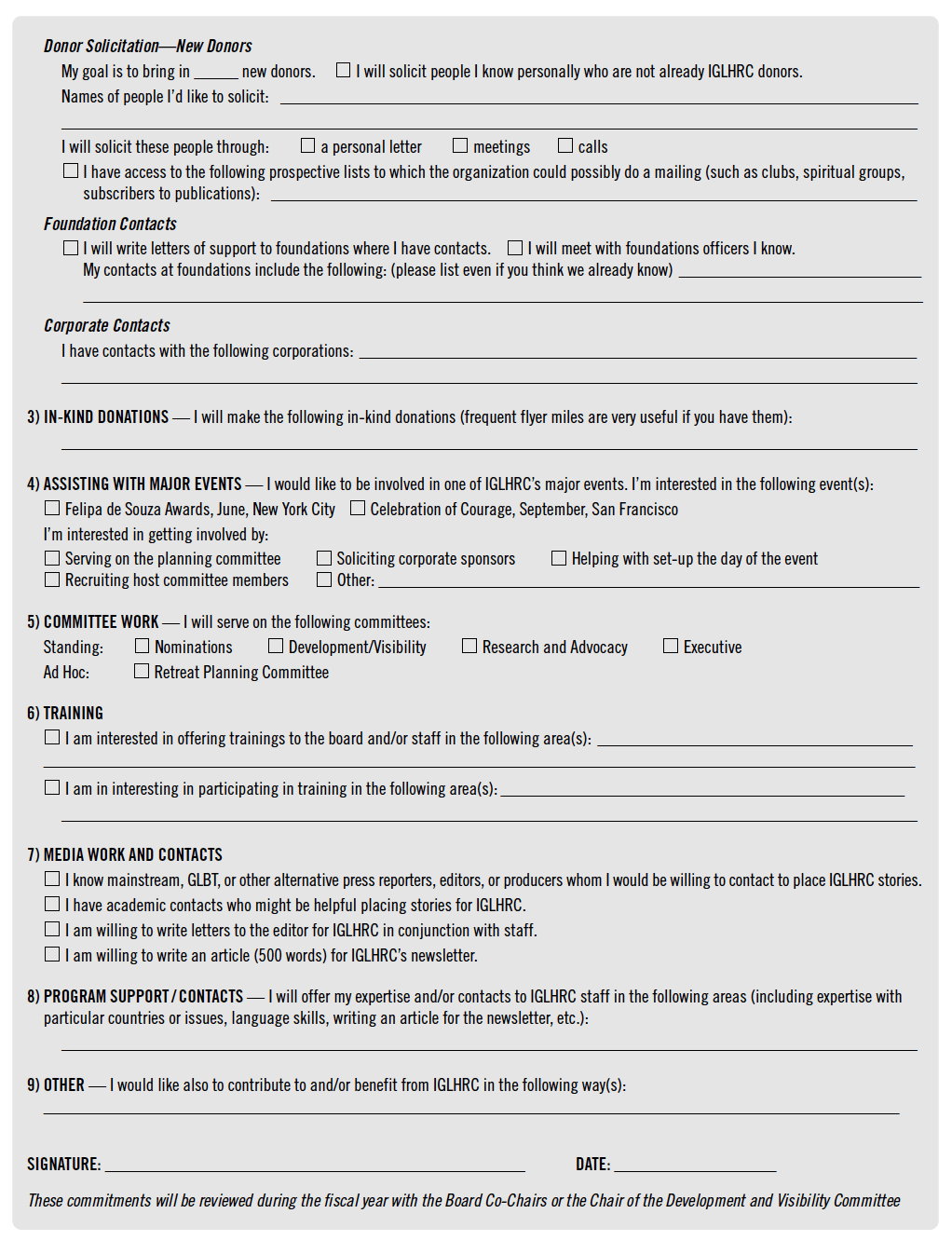