The Death of the Conservative Experiment in Kansas: What Nonprofits Should Know

Advocates who are not regular adherents to the central ideas behind trickle-down economics have been handed a gift of sorts in the Republican repudiation of Kansas Governor Sam Brownback’s six-year-long conservative tax experiment. The skeleton of the experiment was simple: Cutting taxes would stimulate the economy and Kansas would see better times. In Brownback’s speeches, he said there would be no interruption of essential services. But, after years of proof to the contrary, even the Republicans were tired of robbing Peter to pay Paul each year to balance the budget. In the face of ever more bleak job and business numbers, last week they rejected the prospect of continuing on that course. The lawmakers essentially voted to reinstate taxation at close to its former levels.

Why is this important to nonprofits? As we have said, state and federal budgets are your business, particularly now, and that must include an understanding of how taxes are structured and spent. If we ever get back to an attempted redesign of taxes at the federal level, nonprofits need to know that some of the central ideas being promoted have just failed relatively spectacularly on a local level, in a state with a Republican majority in both the legislature and administrative office. Moreover, that failure has indeed trickled down to community programs and those who make use of them.

Presumably, the Kansas legislature believes the populace is with them, which is interesting because Brownback’s tax cuts included cuts to taxes on personal income and some types of business income, so this repudiation will hit many voters in their pocketbooks. It also created a lot of holes and then shifted monies to fill those holes. The Washington Post’s WonkBlog described some of them.

The policies also blew a substantial hole in the state’s budget, turning long-standing budget surpluses into yawning shortfalls. To pay its debt, the state government delayed payments to school boards and local agencies, canceled or delayed road maintenance and put off payments to pension funds.

In 2015, Brownback and Republicans in Topeka increased the sales tax to raise more money. Sales taxes are disproportionately paid by the poor, who spend more of their money on everyday goods that are subject to the tax.

Then, as Ana Swanson and Max Ehrenfreund wrote,

Last year, with the reserves all but exhausted, the state drew down $400 million from other sources, the bulk of it from the highway fund, and put off making payments totaling about $200 million.

It wasn’t enough. This March, Kansas’s Supreme Court ruled that the lack of support for public schools violated the state’s constitution, and ordered the government to increase funds.

There are plenty of analyses out there, but here are some of the experiment’s promises and results:

The next contrast between promise and reality relates to disposable income. For that, we’ll turn to a graph from Business Insider. This may be the reason legislators felt like ending the experiment was unlikely to cause a ripple among voters. 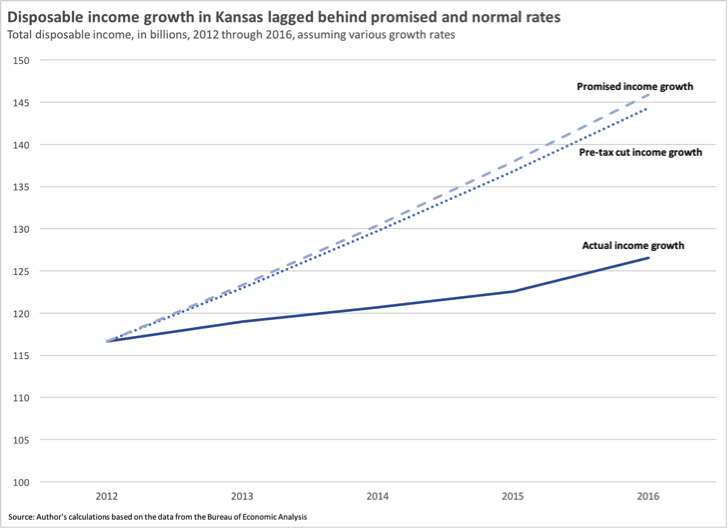 Disposable income also declined in neighboring states, but to nowhere near the same extent.

A general fund balance of $700 million was spent to zero. Two sales tax increases gave Kansas the highest sales tax on food in the nation. Property taxes jumped as well. Proceeds from long-term, record-breaking highway bonds, totaling $850 million, were siphoned off to pay for tax cuts. Growth rates trailed the region and the nation. The 2016–17 budget deficit ballooned to $300 million.

So, besides that the whole scheme was built on a concept that was never proven, what else went wrong in Kansas? It is said that the states are the laboratories of democracy. A key component of Brownback’s dream, in fact, was to make the state more attractive for both business activity and residency by eliminating the state’s income tax entirely.

Brownback’s plan was developed as part of his campaign for governor in 2010 and implemented in 2011 and 2012. The key provisions included reductions in personal income tax and exemption from income taxes for small limited liability companies and other “pass-through” business owners. The changes for pass-through entities were based on the idea that the same income shouldn’t be taxed twice—once at the company level and again at the individual level.

Bryan Lowry, a political reporter at the Kansas City Star, identified the pass-through taxation issue as a key problem for Kansas citizens: “Even a lot of conservatives were running away from that part of the tax plan by 2016 because there was a real backlash against a policy that wage-earners found unfair. It was a really effective talking point: Why are you paying taxes on your wages when your boss isn’t?” And, of course, the promised economic benefit from the tax changes hasn’t materialized.

Typically, the conservative approach to government is expressed in terms of both lower taxes and lower spending. However, there is little or no mention of less government or lower spending in recent reporting on Kansas politics. In most states, state spending is typically centered on Medicaid services and funding for public and higher education. In Kansas, the governor’s FY 2017 budget report identified 62.5 percent of the state’s spending for education and 26.2 percent for human services. When almost 90 percent of the state’s budget is allocated to entitlements, the largest of which is constitutionally mandated public education, significant spending cuts are hard to find, much less implement. Conservative policymakers in other states and the federal government should take note of the difficulties involved in reducing government spending when it is structured like the budget in Kansas.

Writing for Bloomberg View, Barry Ritholtz asserts that Brownback’s failure is due in part to the validity of the Laffer curve in the extreme but its failure at the margins. Tax policy influences behavior, but it requires major policy changes to produce significant change, according to Ritholtz. Tinkering with state tax rates, especially when the rates aren’t extreme to begin with, doesn’t provide the economic stimulus supply-side economists and their adherents claim, Ritholtz says.

Brownback is term-limited, and the candidate field for governor in 2018 appears unpredictable. On the Republican side, Secretary of State Kris Kobach has announced his candidacy. He is a conservative and Trump supporter known for pursuing strict voting eligibility laws and opposing illegal immigration. On the Democratic side, Lowry handicaps the race as follows:

Carl Brewer, the former mayor of Wichita, would be the first black governor of Kansas if he wins. Josh Svaty, a former lawmaker and state secretary of agriculture, has a lot of rural Democrats excited. He’s a farmer. He’s only in his 30s. And he has a lot of policy experience. But he had (an) anti-abortion voting record and some progressives are very wary about his candidacy. And then, finally, there’s Jim Ward, the current minority leader of the Kansas House. Ward has a reputation as a progressive bomb thrower. He’s been one of Kobach’s and Brownback’s fiercest critics in the Legislature and I’m picturing a state fair debate between him and Kobach going down like a vintage WWF title match.

Brownback’s experiment failed for several reasons, many of them related to the damage done by small changes in government policy and administration. The fragility of Brownback’s rise and fall are both found in relatively small changes in political balance and economic indicators. The Kansas experience may demonstrate that tinkering at the edges of tax and regulatory policy may not promote positive change, but it can sure cause a lot of economic and political derangement. Depending on the preferences of Kansas voters, the Kansas laboratory of democracy may enter a new experimental phase after 2018.

And, as for what we can expect at the federal level when tax discussions get started, it would be folly to predict anything at this point. But, Republican members of the House and Senate who are not true believers in the proposition that tax cuts will result in prosperity certainly have an activist model to follow. Of course, at the federal level, there are more trust funds from which to borrow, and more opportunities to use deficit spending to fund both government services and tax cuts.