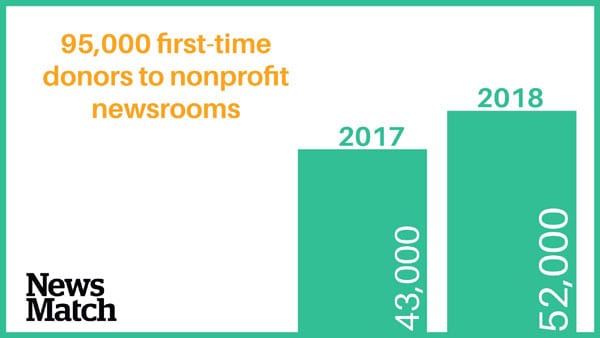 Nieman Lab called the national show of support for nonprofit news “heartening” for the journalism field as a whole, which has been waging a relentless uphill struggle for the last few years. The news that 240,000 people donated to nonprofit newsrooms just in the last two months of 2018 as part of the NewsMatch program is significant for this year’s 154 participating newsrooms, but it is also a hugely hopeful sign for the country as a whole.

Writing on Medium, Josh Stearns, director of the Public Square Program at the Democracy Fund, describes NewsMatch as a platform that “doubles donations to support quality journalism at the end of the year and provides expert training, individualized coaching and a campaign-in-a-box to grow the long term sustainability of local news and investigative journalism.” In 2018, NewsMatch aided 154 nonprofit newsrooms in raising $7.6 million from individuals and a group of foundations and companies, “which makes it the largest-ever grassroots fundraising campaign to support local news.”

NewsMatch’s cumulative history over the last three years reveals an average fundraising increase of 11 percent for NewsMatch participants between 2017 and 2018 and the surprising fact that small and medium-sized outlets saw the biggest growth in year-end support in individual donors and dollars raised. NewsMatch has also become a draw for philanthropic organizations, Stearns describes it as “a simple on-ramp for funders who want to help rebuild journalism in America.”

In an effort to promote NewsMatch’s year-end campaign, the Institute for Nonprofit News, a ten-year old organization that began with 27 member newsrooms and today boasts more than 200, ran its own story on the best nonprofit news stories of 2018. The list is divided into 11 categories and is filled with standout stories, including an article in the Philadelphia Public School Notebook detailing a botched lead paint remediation attempt, a collaboration between Chalkbeat and Bridge Magazine about the consequences that come from frequent school changes in Detroit, and a special report in the National Parks Traveler that highlights the maintenance backlogs at some national parks have left friends groups paying for park improvements. Also on the list is a story by the Connecticut Mirror that examines the glaring poverty that exists within America’s richest state. According to INN, this story received an immediate endorsement from one of the state’s senators who tweeted “If you live in Connecticut and read only one thing today, make it this.”

Even with this recent good news, the challenges for nonprofit news and the entire journalism industry persist and the aftershocks are expected to be around for a while. Stearns cites the Knight Commission’s final report on Trust, Media and Democracy, which affirms, “With traditional business and financial models for journalism under siege, major investments in and new approaches to supporting sustainable nonprofit and journalism collaborations are essential, particularly at the local level.” As part of this search for new models, Stearns notes that NewsMatch will soon be doing its own outreach to new corporate and philanthropic partners on behalf of nonprofit news outlets. In addition, NewsMatch has also partnered with a social impact strategy firm to serve as an independent evaluator of its ongoing work.

With all the ups and downs within the journalism industry, as Stearns rightly points out, “The real heroes here are the journalists and staff who work for nonprofit newsrooms all over the country.” More specifically, we wouldn’t have known about the problems in public schools in Detroit or Philadelphia, or the national parks, or even the entire state of Connecticut if reporters hadn’t had the tenacity to uncover those stories. The Knight Commission’s report acknowledges that “Americans have lost faith in the institutions that underpin our democracy,” but hopefully the work done by these nonprofit journalism outlets can help restore some of this faith.—Anne Eigeman