Don’t Just Stand There, Say Something!

Editors’ note: This article, first published in print during June-1995, has been republished for Nonprofit Quarterly with minor updates.

All over America, grassroots organizations are planning open houses, receptions, cocktail parties, and the like. Meticulously they work through the details: cleaning their offices, deciding whether or not to have the event catered, how much to spend, whether to serve wine, and how dressed up everyone should get.

I recently went to such an event. It was an open house. Everything about it was politically correct: Child care was provided, no animals were sacrificed for the hors d’oeuvres, the coffee was donated by a store that buys from an organic, worker-owned coffee plantation, and all the cups and napkins were made from recycled, unbleached paper. Dozens of people came, milled around, and left.

The main flaw in this otherwise flawless party was the lack of circulation: The board members and staff members stood in clumps, talking mostly to each other or to other people they already knew. Once in a while a board member would stand with a frozen smile at the food table trying to look welcoming to strangers, but actually looking like he or she had just been struck with a tranquilizer dart and would fall over at any minute.

When, afterwards, the staff of this organization asked me what I thought, I told them they had missed a great opportunity to meet people. “But,” they wailed, “how do you do that?” Since then I have talked with people in several other organizations who have raised the same question.

So, here is a step-by-step approach for meeting prospects at events that you organize, with things to think about at each stage — before the event, at the event, and after the event.

Before the event, form a committee of people who will be “greeters.” This committee will draw from board members, staff, and volunteers. Ideally, there should be one greeter for every 10 to 20 new people expected to attend. The greeters go over the invitation list or the RSVP list (if there is one), identifying for each other who may be coming and who is important to meet.

Generally, there are three kinds of people who come to open houses and reception-type events: people who are friends of staff and board members; people who work for other nonprofits and want to be supportive or just want to see what your group is up to; and people who are donors or donor prospects. Certainly, many people fall into all three categories, but the greeter’s job is to focus on those people who are donors or prospective donors whom no one knows. Reviewing their names and whatever information is available about them will help in finding them at the event.

Next, the greeters assign themselves to “stations.” Two people should be at the door or the sign-in station. They greet everyone as they come in, ask them to sign the guest-book, give them a name tag, and tell them where to put their coats. Depending on the size of the event, one or two people should stand near the food and drink tables, and one or two should be at a table with literature about the group and anything that might be for sale, such as T-shirts, buttons, books, or posters. Another greeter “patrols” any quadrant of the room that is not covered already.

All the greeters should get small notebooks and pens that easily fit in a pocket. They should also have a supply of business cards with the name of the organization and a space for them to write their own name, as illustrated. 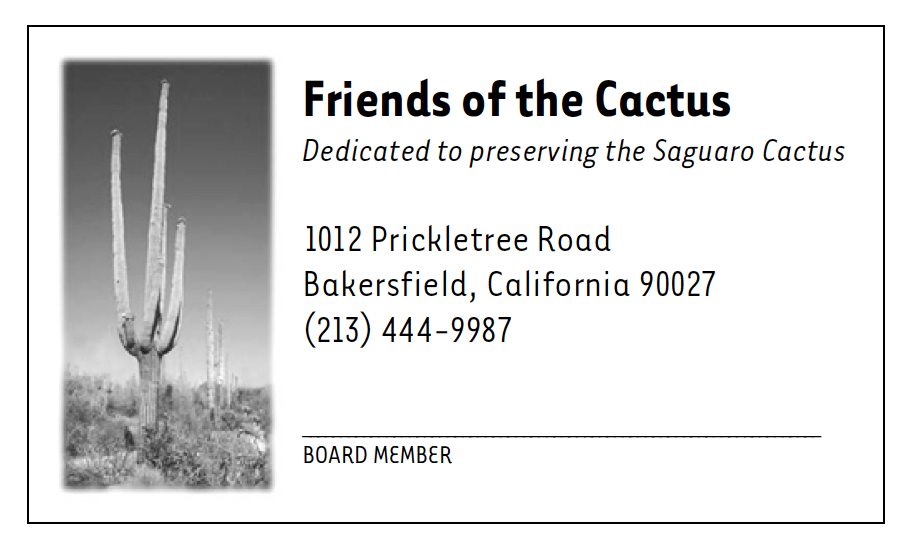 The greeters should plan to wear jackets or pants with pockets big enough to carry their notebook and business cards unobtrusively.

Each greeter should have a special name tag or a flower or something that identifies them as “officials” of the organization giving the event.

From time to time, greeters should slip off to the bathroom or a back room and write a few notes in their notebook after meeting a person and talking with them for a while. The notes should include the name of the person and any other useful information about them. That way, the greeter is not pressured to remember everything about everyone they meet.

Here is a sample from a greeter’s notebook:

Keenan Reilly — Owns Reilly Lumber. Has given off and on because his sister used to be on the board. Said if we ever needed lumber to let him know.

Mako Yashimura — Is a stockbroker down the street. Said someone at her gym wears our T-shirt all the time. Gave her a membership brochure.

Karen — Long last name beginning with T. I was embarrassed to ask her to repeat it more than once. Teaches high school civics or social studies. Talked about using our newsletter in her classes. Asked if we use volunteers for anything besides fundraising. I said we’d contact her.

Mary Oldmoney — Didn’t say much, seemed glad I came up to her. Said the food looked expensive, asked if it had been donated. I told her we got a good deal on it, but had the feeling she didn’t approve. Left pretty soon after she got there. Her final words were, “I don’t hear as much from you now that Sarah’s not here.” Who is Sarah?

Trading business cards is also useful. If a guest wants more information about your group, offer to send it to them and ask for their card. Or tell them to call you if they have more questions about whatever topic you have been discussing and give them your card.

Probably the hardest thing to figure out is what to say first. People expect the identified greeters to talk to them, so they probably won’t be surprised at being approached. Allow your opening line to be pedestrian and unthreatening. “Great weather for this time of year,” or, “The stuffed mushrooms are really good,” or, “I’m Betty Boardmember and I’m really glad you could come.” You can admire something the person is wearing: “That’s a lovely pin, necklace, dress.” Only do this if you really do admire it. It is important to remember that a person may be glad that you are talking to them without knowing how to respond. Shy people often don’t know how to make small talk, so don’t be discouraged if your conversational lines meet minimal responses at first.

After your opening, move to more direct questions or comments. “Are you a member of Friends of the Cactus?” or, “Do you live near here?” or, “I used to know everybody at these events because we were such a small group, but now we have a lot of new people, which is great.” or, “Where do you work?” or, “How did you come to know about Friends of the Cactus?”

After a few sentences back and forth, use your common sense as to whether to move on or pursue more conversation. If the person is chatty, talk to them. If they have questions, answer them. Try to drive some of the conversation to your group and what it does, and what they know and like about what you do. If they answer all your platitudes with a one-sentence platitude of their own, move on. If you are talking to two people who have come together, you can move on without guilt because they have each other. If the person is alone, you may want to introduce them to someone or talk a little longer.

The point of all this is fourfold:

There are two kinds of people who are difficult at these events: those who don’t talk and those who talk so much that you can’t get away from them. For the latter, the rovers are important. Rovers keep an eye on all the greeters and if they see a greeter spending an inordinate amount of time with someone, they go over and join the conversation. By a prearranged signal, if the greeter wants to be rescued, the rover says to the greeter, “Excuse me, I need to show you something,” and pulls the greeter away with much apology.

A day or two after the party the greeters should meet and compare notes. They look at the sign-up sheet and note who they were able to meet. If they promised anyone anything, they send it. If they had a particularly good conversation with someone, they send that person a nice note. “Dear Mary, It was good to meet you at our Open House. I hope you will be able to come to the spring event. Vickie Volunteer.”

Remember — the purpose of fundraising is not raising money, which is the end result of doing fundraising properly. The purpose of fundraising is building relationships. Every time you have a chance to meet people who are interested in your organization, take it. Maybe their interest was just in the free food, or maybe they just came to meet a friend and go out to dinner afterwards, but maybe they came to see if you look as good up close as you do in the newsletter, or to see if they might want to volunteer.

Friendliness will get you everywhere, and organized, planned friendliness will ensure that you don’t blow this opportunity because you didn’t think clearly enough about what to wear, where to stand, and what to say.

More about: Boards of DirectorsGrassroots Fundraising