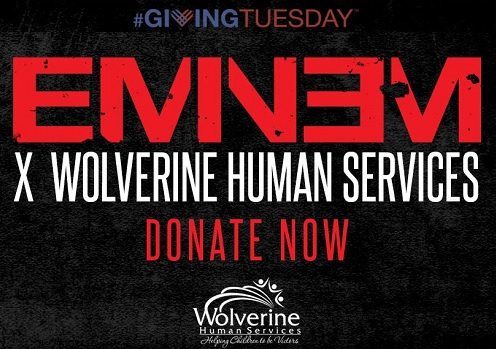 Perhaps owing to his years spent growing up in the hard-struck area on the east side of Detroit, Eminem has a history of giving to Wolverine Human Services, a social service agency serving Michigan’s at-risk youth. For Giving Tuesday, he decided to involve his Twitter fans in the act of giving back as well. Eminem collaborated with Chirpify, a social media marketing company that allows Twitter users to make transactions simply by using hashtags on Twitter. Eminem has offered to match the first $100,000 in donations to Wolverine.

Wolverine Human Services CEO Judith Wollack also revealed that the Marshall Mathers Foundation has donated at least $200,000 in the past two years to the organization for children’s gifts, estimating Eminem gave at least $105,000 the first year.

Eminem used his following of more than 16 million Twitter users to spread the message:

RT to #donate to Detroit’s @WolverineHS. MMF is matching each donation dollar for dollar up to $100k! #WolverineMMF #GivingTuesday

Donors just needed to tweet the two hashtags, #Donate and #WolverineMMF, or retweet Eminem’s tweet, and Chirpify will transfer a $10 donation to Wolverine.

The fundraising campaign was successful, bringing in $70,590 in donations by the end of Giving Tuesday.

Eminem’s fundraising campaign driven by social media and hashtags proved to be rather successful. Chirpify has also launched #actiontags, which will allow users to make donations, enter contests, or subscribe to newsletters just by using a hashtag. These hashtags will also work across channels, spreading the message from Twitter to Facebook and Instagram.—Aine Creedon