Editors’ note: This article, first published in print during Jan/Feb 2006, has been republished for Nonprofit Quarterly with minor updates.

The following three stories illustrate the importance of evaluation as a tool in developing a healthy fundraising program for your organization.

Group X has been raising money from individual donors for several years. At the end of every year they send a fundraising appeal to their mailing list of approximately 2,000 names. For the past three years, they have received 250 to 300 donations from that mailing. They don’t know if the same people give each year; they also don’t know if the rest of the people on their list (as many as 1,700 each year) are even interested in continuing to hear from them. They maintain their list in a database program that is not a specialized fundraising database, and they don’t have an easy way to document the giving history of their donors.

Because they’d like to expand their donor program and increase the amount they raise from current donors, they realize that they need better systems of tracking their contributions and a way to analyze patterns of giving over time.

Group Y has spent the past five years systematically building an individual donor base. They ask their donors for money three or four times a year, including a year-end mail appeal, two special appeals, and an invitation to their annual dinner. They make an effort once a year to meet with each major donor (defined as someone giving at least $1,000 a year).

When Group Y recently faced a bud get crisis brought on by cuts in their foundation funding, they decided to increase their efforts to expand their major donor program.

By evaluating their donor giving patterns in this way, they were able to identify the middle range of donors (those giving $100–$1,000) as the group most neglected in their fundraising activities and thus the group with the most potential for expansion.

At Group Z, Daniel, the new development director, was frustrated by the lack of board involvement in the organization’s major donor program. Half of the board members refused to do any face-to-face asks and most of the major donor solicitations were carried out by the executive director, with only a few made by board and other staff members. Bringing his concerns to the executive director, Daniel learned that the board had actually improved significantly over the past several years. Five years earlier, the only major gifts the group received came by chance in response to their annual mail appeal. No one ever met with any donors and the board did not participate in fundraising at all — nor were they expected to.

Now, after many fits and starts, cajoling, training and encouraging the board, half of the board is actively participating in the annual major donor campaign, and a few more board members join in every year.

THE VALUE OF EVALUATION

These three examples illustrate how evaluation can help you know whether or not your fundraising program is doing what you want and need it to do. Evaluation tells you how close you came to accomplishing your goals and gives you guidelines for developing next year’s fundraising plan.

Group X had neither fundraising goals nor a way to find out how well their donor program was working. Group Y learned where their greatest opportunity for growth lay. (In fact, many groups find a gap in their individual giving program in the $500 to $1,500 range, as this is often the most neglected group of donors. This is partly because donors giving more than $1,500 are given a lot personal attention for their significant donations; donors giving less than $500 probably don’t expect a lot of personal attention, and continue giving if you merely communicate with them every so often about how the work is going and ask them to give on a regular basis. With just a little more effort and more personalized approaches to the under-$500 donors, more of them would probably increase their giving over time and move into the $500–$1,500 category.) At Group Z, by discovering how far the board had come over the past several years, the development director was able to appreciate the progress they had made and rethink how to work more effectively with them.

It is most helpful to evaluate both the “hard,” or quantitative, outcomes that you can count — such as the response rate from a direct mail appeal, how much money you raised (after expenses) from a special event, how many donors renewed their support, and how many increased their gifts — and the “soft,” or qualitative, outcomes. Qualitative measures include how many and in what way board members were involved in fundraising for the organization, what kinds of relationships you’ve been able to build with donors, and how fundraising is perceived in the organization (for example, as a thankless task or an important part of how an organization’s mission is fulfilled).

There are other goals you want to set in both “hard” and “soft” terms and then evaluate. These include the following:

The answers to the following detailed questions will provide the foundation of your evaluation. From these, you will be able to determine if you’ve met the broader goals described in this article.

Questions about donors and money raised

Questions about board, staff, and volunteer roles in fundraising

Questions about systems and infrastructure

For example, did it gain publicity for your organization, provide education on fundraising for members, provide an opportunity to get to know and involve donors more? 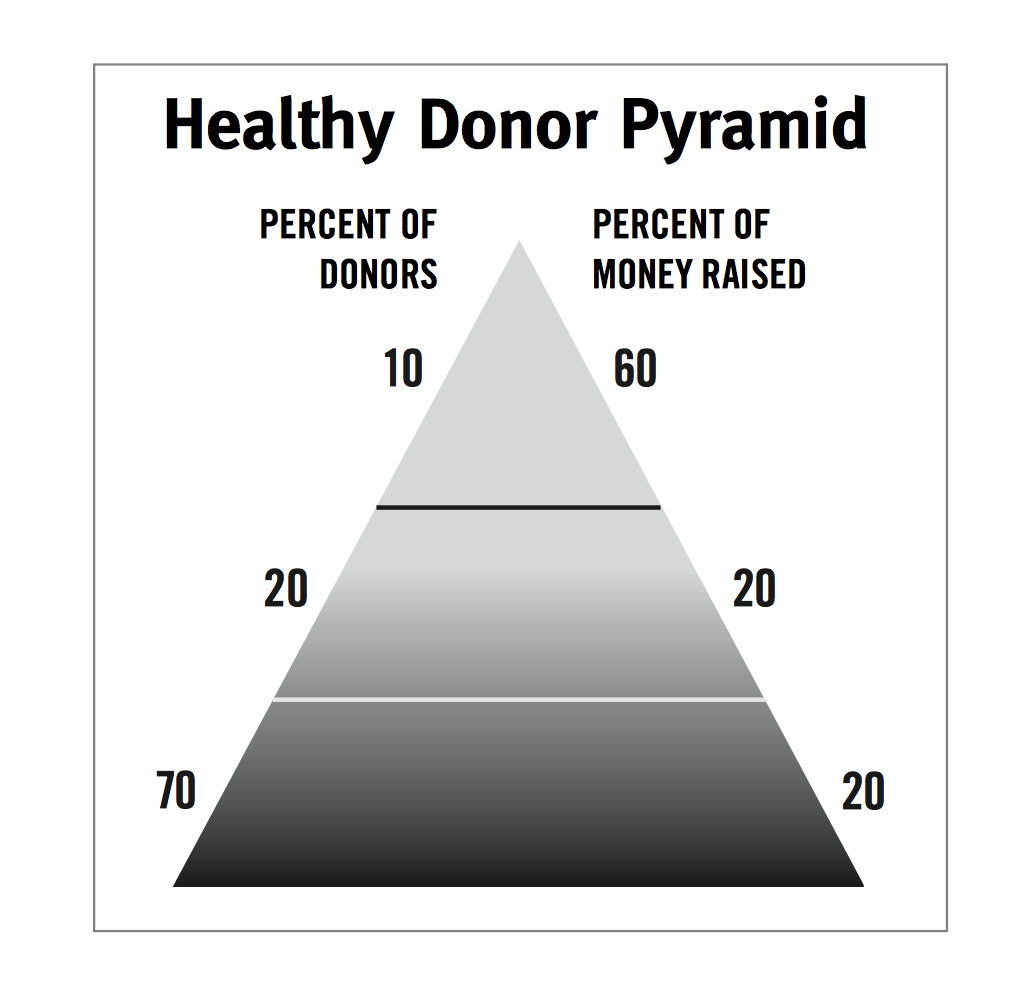 The chart shows an evaluation of the fundraising activities of one organization. They currently raise about 25 percent of their annual budget from individuals; the rest comes from foundations.
Their goal is to increase the proportion raised from individuals to 50 percent over the next five years. A chart like this is easy to do and will give staff and board a bird’s-eye view of the kind of information you need to generate in order to evaluate your fundraising program.

You will need to add more detail in order to fully assess strategy or fundraising effort.
For example, in the section on “Direct Mail to New Prospects,” you would evaluate the results of each list you mailed to, as well as any changes you made in the package (envelope, letter, reply device, inserts) since your last mailing. On the major donor campaign, you would want to incorporate feedback from members of the solicitation committee and from the donors you met with, and identify ways to get more people involved or give solicitors more support to be able to complete their asks.

Take time after each activity is completed to evaluate it. In the case of an activity that involved a team of people, such as a major donor campaign or a special event, bring the team together to celebrate the success of the activity, discuss the results, and identify areas to improve upon for the next year. Keep written records of all your evaluations. Once a year, when you are making your fundraising plans for the coming year, review all the evaluations done during the year and add any other information that was not covered there. These written reports will also be useful for tracking your fundraising progress over several years and in orienting future staff and volunteers.

USING THE RESULTS OF YOUR EVALUATION TO PLAN

The results of your evaluation should inform the planning for your next set of fundraising activities. If you have done a thorough job of evaluating your past year’s activities, when you are putting together a fundraising plan for the next year you will have a much clearer idea of how much money you can realistically raise, how much it will cost you, and how many donors will respond to a given strategy and at what levels of giving.

Stephanie is a principal of Klein & Roth Consulting, and has been a trainer, writer, consultant and coach on fundraising, board development and other organizational development issues from a social and racial justice perspective for over 25 years. She was a co-founder of GIFT, an Editor of the Grassroots Fundraising Journal, and co-author of “The Accidental Fundraiser: A Step-by-Step Guide to Raising Money for Your Cause”. She lives in the San Francisco Bay Area with her wife, Kim Klein.