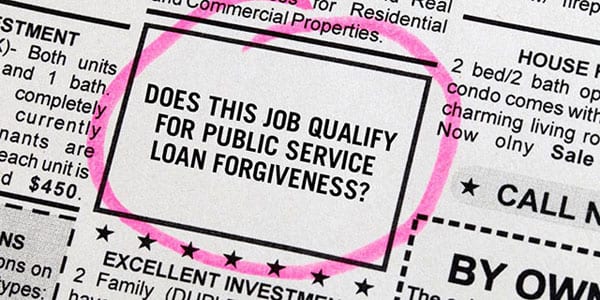 As regular NPQ readers will recall, NPQ has been tracking the status of the Public Service Loan Forgiveness (PSLF) program, a program that seeks to ensure that high college tuition and the resulting student loan debt burden does not inadvertently depress the number of young adults choosing to enter lower paying government and nonprofit jobs. Launched in 2007, the program enables people working in those sectors for a decade and making regular minimal loan payments to have their remaining debt written off after 10 years.

One political advantage of setting a 10-year period was that in 2007, the initial 10-year scoring (cost estimate) was zero. Of course, we’re now at year 12, and the bills are coming due, leading to a host of problems. For example, there’s the need to determine what counts as a qualifying nonprofit: If you’re a 501c3, you’re safe; if you’re another kind of nonprofit, it depends. Which brings us to the case in question here.

Nearly two years ago, four public-interest lawyers—Michelle Quintero-Millan, Geoffrey Burkhart, Kate Voigt, and Jamie Rudert—filed suit on their own behalf to defend their access to the PSLF program. As Michael Wyland wrote in NPQ in April 2017, the crux of the suit is that the former law students have claimed “that FedLoan Servicing, which administers the program for the Education Department, issued approval letters that were then rescinded with little or no opportunity to appeal the decision.”

As NPQ has noted, broader challenges are also affecting the PSLF program. A 2018 US Government Accountability Office (GAO) report found that of the over 19,000 who completed the 10-year requirement, only 55 had their debt forgiven. Meanwhile, there are a total 890,000 people who have had their requests for inclusion in the PSLF program approved—meaning that the pipeline is likely to grow over time.

Last Friday, Judge Timothy J. Kelly of the Federal District Court for the District of Columbia ruled on behalf of three of the four student loan borrowers: Quintero-Millan, Burkhart, and Voigt. However, Rudert was not so lucky. The first three plaintiffs worked for 501c6 legal organizations, while Rudert worked for a 501c19 veterans association.

Under the federal Public Service Loan Forgiveness program, implemented in 2007, “Borrowers seeking to get their loans forgiven…must have the right type of federal loan, make 120 on-time payments, enroll in the correct category of repayment plans and work for an eligible public-service employer.”

This, however, creates high stakes. Ron Lieber of the New York Times notes that, “people who qualify for entry into the 120-month loan forgiveness pipeline are in income-based repayment plans that don’t even cover all the interest that accrues each month. As a result, their balances grow over time rather than shrinking.”

For example, say you had been told your job qualified for student loan forgiveness. As a result, you plan minimum payments, since you expect all of your debt to get waived. But then, it isn’t. The effect can be devastating. For instance, as Kelly pointed out in his ruling, “Quintero-Millan’s total federal student debt has increased from approximately $340,000 when she entered repayment to $430,446.48 as of May 2017.”

For its part, the US Education Department argued in court “that the denial letters did not have ‘an immediate or significant practical effect’ on the individual plaintiffs because their ‘eligibility for PSLF’ had not yet been finally determined,’” Kelly noted that this was “nonsense,” since the borrowers’ loan balances were spiraling upward and “they might have needed to change jobs if their current employment was not eligible for loan forgiveness.”

Fortunately for Quintero-Millan, Burkhart, and Voigt, the Court ruled, as Lieber explains, that the US Education Department retroactively “had changed two of its policies without properly informing borrowers or considering the impact on the borrowers who were relying on its original guidance. One policy determines whether public service is an organization’s ‘primary purpose,’ and the other relates to whether educational services are provided in a ‘school-like setting’.” This, the Court said, you cannot do.

As a result of the ruling, the three borrowers who won the case and all others like them now have grounds to petition the US Education Department to have their eligibility reinstated. (The department’s press office did not immediately respond to a request for comment from the Times.) The issue with Rudert, the fourth plaintiff, involved a different standard: whether his work for paralyzed veterans was at an organization that provides services “outright,” and whether that ought to matter. Kelly ruled that the “outright standard” was an appropriate reading of the program’s rules and that its use in this instance had not represented any actual policy change. Chong Park, a lawyer at Ropes & Gray who represented all the plaintiffs, said he and Rudert would consider their next steps in the coming days.—Steve Dubb