Free Clinics and the Volunteers who Staff Them 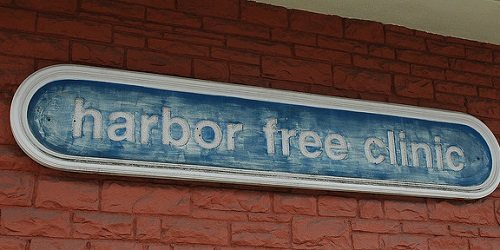 By early afternoon on Friday, according to the Contra Costa Times, some 1,100 people had received healthcare treatment at a free health clinic in Oakland sponsored by Adventist-Laymen Services and Industries. Two hundred or so had sought dental care, in part because for some reason, dental care is not included in the coverage offered under the Affordable Care Act. The Mercury News put the figure of people who came for assistance at 3,000.

The clinic, held in the East Side Club and the New Amsterdam Bar at the Oakland Coliseum, where the Oakland Raiders play, was described as like “the Hunger Games,” by Emily Taft, who lined up at 2:30 a.m. to wait for the clinic’s 5:00 a.m. opening. One presumes she meant that there was a lot of desperation among the people who showed up. This is healthcare in the U.S., even after the enactment of the ACA, requiring the determination and ingenuity of a Katniss Everdeen to get the treatment one needs.

According to the Contra Costa Times, the chief dentist at the clinic, Richard Beckermeyer of Michigan, has staffed similar clinics in Mongolia, Albania, and Kenya, in addition to localities in the United States. Earlier in the week, the Adventist program, formally called the Bridges to Health clinic, was in San Francisco at the San Francisco Armory.

The Adventists’ efforts in Oakland and San Francisco are hardly unusual. In Pullman, Washington, graduates and employees of Washington State University started up the Palouse Free Clinic, operating from a suite at the Pullman Regional Hospital. Plans to launch the HelpCare Clinic to serve the Kearney, Nebraska region were announced earlier this month, though it will take about a year to get that program up and running. Amaus Health Services is a free dental clinic opening in Syracuse, New York next month. Next weekend, the Remote Area Medical Free Health Clinic will be operating in East St. Louis.

The list of short-term as well as continuing free clinics appears almost endless. One would have thought that the Affordable Care Act would have made free clinics much less necessary than they have been in recent years. Rather, they appear to be more needed more than ever, a reflection of the two-tiered health coverage that Congress jammed down the throat of the American public:

The hundreds of doctors, dentists, optometrists, and nurses who volunteered for Bridges to Health, as well as their colleagues who will be delivering services in Kearney, Syracuse, Pullman, East St. Louis, and elsewhere, are true heroes and heroines. They aren’t taking anyone’s jobs by volunteering. They aren’t rank amateurs imagining that they can deliver professional-quality services. These people are taking time from their professional jobs and personal lives to deliver real, technical services for people who don’t have alternatives for getting decent healthcare treatment.

Our nation could solve some of the problem by eliminating the punitive exclusion of undocumented immigrants from the ACA and other government-subsidized health services and by recognizing that dental care is a crucial and necessary component of comprehensive healthcare. If this isn’t going to happen in the near term—and more than likely, given the tenor of political leadership in this country, it won’t—the work of these free clinics and the medical personnel who give of their time and talent is invaluable.—Rick Cohen