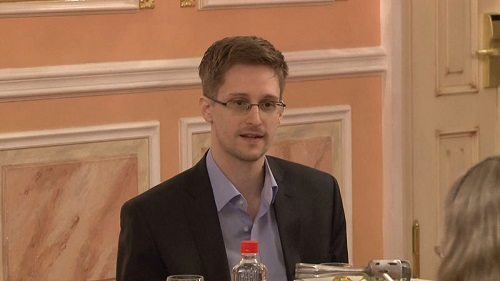 The 14-month-old Freedom of the Press Foundation today announced that Edward Snowden would be joining its board of directors. And while NPQ generally does not cover announcements of new board members, in this case the appointment is clearly as much a political statement as anything else the foundation might do. The notion of board appointments as statements of the values held by the organization is a powerful one, so because of that, we would like to provide the foundation’s own statement about its reasons for bringing Snowden into the fold.

I am proud and honored to welcome Edward Snowden to Freedom of the Press Foundation’s board of directors. He is the quintessential American whistleblower, and a personal hero of mine,” said FPF’s co-founder Daniel Ellsberg. “Leaks are the lifeblood of the republic and, for the first time, the American public has been given the chance to debate democratically the NSA’s mass surveillance programs. Accountability journalism can’t be done without the courageous acts exemplified by Snowden, and we need more like him.”

Freedom of the Press Foundation was founded in 2012 in part to build a movement to support and strengthen the First Amendment and defend those who are on the front lines holding power to account. Its founding board members include Daniel Ellsberg, Glenn Greenwald, Laura Poitras, John Cusack, Xeni Jardin, and John Perry Barlow. The NSA revelations Mr. Snowden brought to light represent one of our generation’s greatest threats to press freedom. Mr. Snowden is joining the board to be part of solution, to help protect today’s journalists and inspire tomorrow’s watchdogs.

FPF co-founder Glenn Greenwald said: “We began this organization to protect and support those who are being punished for bringing transparency to the world’s most powerful factions or otherwise dissent from government policy. Edward Snowden is a perfect example of our group’s purpose, as he’s being persecuted for his heroic whistleblowing, and it is very fitting that he can now work alongside us in defense of press freedom, accountability, and the public’s right-to-know.”

Mr. Snowden said: “It is tremendously humbling to be called to serve the cause of our free press, and it is the honor of a lifetime to do so alongside extraordinary Americans like Daniel Ellsberg on FPF’s Board of Directors. The unconstitutional gathering of the communications records of everyone in America threatens our most basic rights, and the public should have a say in whether or not that continues. Thanks to the work of our free press, today we do, and if the NSA won’t answer to Congress, they’ll have to answer to the newspapers, and ultimately, the people.”

Snowden brings a deep knowledge about how journalists and sources can communicate securely in the age of mass surveillance. Protecting digital communications is turning into the press freedom battle of the 21st Century.

“Journalism isn’t possible unless reporters and their sources can safely communicate,” said Mr. Snowden, “and where laws can’t protect that, technology can. This is a hard problem, but not an unsolvable one, and I look forward to using my experience to help find a solution.”

Freedom of the Press Foundation is currently raising money and awareness for a variety of open-source encryption tools, along with helping media organizations install SecureDrop, a whistleblower submission system.

Ellsberg added: “The secrecy system in this country is broken. No one is punished for using secrecy to conceal dangerous policies, lies, or crimes, yet concerned employees who wish to inform the American public about what the government is doing under their name are treated as spies. Our ‘accountability’ mechanisms are a one-sided secret court, which acts as a rubber stamp, and a Congressional ‘oversight’ committee, which has turned into the NSA’s public relations firm. Edward Snowden had no choice but to go to the press with information. Far from a crime, Snowden’s disclosures are a true constitutional moment, where the press has held the government to account using the First Amendment, when the other branches refused.”

Freedom of the Press Foundation was founded in 2012 to support and defend aggressive, public-interest journalism dedicated to transparency and accountability. It has raised over $500,000 for such news organizations as WikiLeaks, MuckRock, National Security Archive, Bureau of Investigative Journalism, and Center for Public Integrity.

This is clearly a high-powered board, including not only Ellsberg and now Snowden, but Glenn Greenwald and Laura Poitras, as well as Xeni Jardin, a founding partner and co-editor of Boing Boing.—Ruth McCambridge