October 22, 2010; Source: Wall Street Journal | The official invitation to the 25th anniversary dinner of the Lower East Side People’s Federal Credit Union offered the oddest coupling since Felix Unger moved into Oscar Madison’s apartment at 1049 Park Avenue. Sponsoring the event was Goldman Sachs. Among the honorees was Occupy Wall Street. 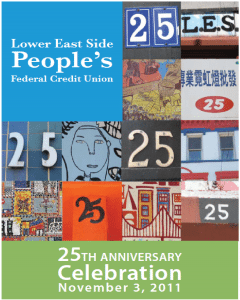 It came as a surprise to Goldman Sachs for sure, and Goldman quickly pulled its name as a sponsor and reneged on its commitment to put $5,000 toward the dinner.

The contradiction is not unknown. Plenty of groups that advocate for tighter controls on the banks or stronger positions against bankers and mortgage brokers also solicit and accept grants from commercial lenders and investment banks. At what point does it become a problem? Clearly the Occupy Wall Street movement, which has targeted the enormous economic power of Wall Street firms such as Goldman Sachs, is a clear dividing line. Half of the sponsors, including Capital One, withdrew when they discovered the Occupy role at the dinner.

Although the Goldman withdrawal, costing $5,000, was of concern to some, it apparently wasn’t disturbing enough to make the Credit Union ditch OWS. An Occupy participant named Pete Dutro thought Goldman’s withdrawal was understandable, commenting, “Do you blame them?”

Goldman has been a longtime supporter of the financial education program of the Lower East Side People’s Federal Credit Union, which oddly enough was the depository originally chosen by the Occupy Wall Street group for holding the money received from donations and fundraising, in part because they were searching for a bank not owned and controlled by Wall Street.

The issue is bigger than one credit union’s fundraising dinner. On October 15th, Occupy Wall Street marchers targeted JP Morgan Chase, distributing flyers to bank customers with instructions for closing accounts at the nation’s largest commercial bank and for opening accounts at listed community banks and community credit unions. One of the recommended alternatives to JP Morgan Chase was LESPFCU. On Facebook, there is a campaign attacking banks for the plans of the Bank of America, Wells Fargo, and others to charge monthly debit card fees, with a planned protest day of November 5th—Guy Fawkes Day.

The message of the Occupy Wall Street movement might be that the 99 percent of Americans shouldn’t be sharing their nonprofit organizations or bank accounts with such financial institutions as Goldman Sachs that are seen as responsive to and controlled by the 1 percent. Perhaps, as the Occupy Wall Street movement gels, the major banks’ and Wall Street investment houses’ discomfort with community credit unions may very well  encompass more than dinners honoring Zuccotti Park protesters.—Rick Cohen