At Most Immediate Risk: Executive Orders and Regulations that Affect the Work of Nonprofits

Every nonprofit organization and nonprofit cause or mission that relies on federal regulation, executive orders, or other non-legislative approaches to implementation is at risk of profound change or elimination when Donald Trump takes office in January.

Trump is exactly correct on one key point. On his first day as the 45th president of the United States, he can alter or revoke all executive orders, executive actions, and administrative decisions. Trump can direct government agencies to cease enforcing regulations and stop pursuing federal lawsuits seeking to compel individuals, corporations, foundations, and state and local businesses to comply with federal law and regulation. According to CNN, “In fact, Trump could issue a blanket order that rolls back every executive order Obama signed on the first day of his presidency, if he wanted to.”

The fragility of executive orders is demonstrated with the issue of “federal money for international organizations that promote or provide abortions overseas.” In his first week in office, President Obama reversed an executive order signed by his predecessor that restricted these funds. Trump, who has expressed pro-choice sympathies in the past but who ran in 2016 as a pro-life candidate, may “reverse the reversal” and restore some or all provisions of the Bush-era executive order, which would have the force of law—until it is changed or rescinded by a pro-choice president. Trump just “restated his pledge to roll back abortion rights.”

Those of us of a certain age remember Schoolhouse Rock and the three-minute cartoon describing how a bill becomes a law. Given the unprecedented and profound Congressional gridlock over the past several years, and especially after the “tea party” election of 2010, many people have lost sight of the traditional route of lawmaking and the president was forced to look at alternative means to implement his agenda for the country. Not surprising, given the decrease in bills passed by Congress from 1973 to 2014: 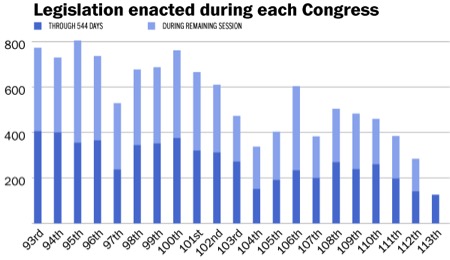 Instead, using President Obama’s 2014 declaration that “I’ve got a pen and I’ve got a phone,” a record number of executive actions, agency rules, and department “guidance” has shaped federal policy, often in controversial and significant ways. Interestingly, relatively few of these initiatives were implemented using the formal “executive order”—only 256 executive orders have been issued under the Obama presidency through October 20, 2016. In comparison, Ronald Reagan issued 381, Bill Clinton issued 364, and George W. Bush issued 291 executive orders. The reliance on regulations led to more than 81,000 pages in the Federal Register, the official daily digest of the national government, in 2015, eclipsing the 77,000 pages in 2014 and the previous record of 81,405 set in 2010. When “economically significant” regulations are considered, Obama’s totals significantly exceed those of Bill Clinton and George W. Bush. 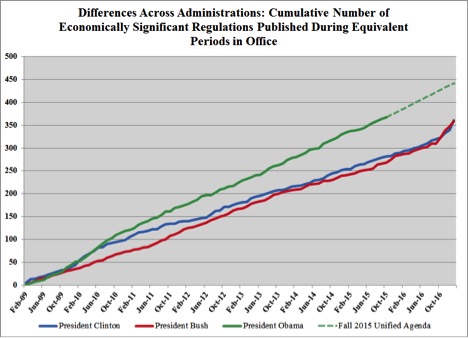 The difficulty with non-legislative approaches to advancing an agenda is that while a president doesn’t need Congress to enact regulations and administrative guidance, he or she doesn’t need Congress to amend or repeal them, either. More importantly, each succeeding president may amend or repeal a previous president’s actions. In addition, new Cabinet secretaries may change or eliminate administrative regulations or “guidance” issued by their predecessors.

When President Obama met with President-elect Trump at the White House last Thursday, Obama was expected to make a pitch for Trump to keep at least some of his executive actions intact.

“There is a tradition, particularly with regard to executive agreements of successive presidents preserving some element of continuity,” said White House press secretary Josh Earnest. “I don’t know whether or not that will apply in this case. But as a part of this effective, smooth transition, President Obama will have an opportunity to talk to President-elect Trump about some of the benefits of these policies.”

Of course, Trump campaigned explicitly on a platform that included rolling back many of Obama’s non-legislative as well as legislative actions. A few examples include:

Immigration—Trump can rescind the Deferred Action for Childhood Arrivals program, which provides a path to legal status for children 16 or younger who arrived in the U.S. after 2007. “According to the Migration Policy Institute, 1.3 million young adults age 15 and older were eligible for the program as of 2016. Sixty-three percent of this group population had applied as of March 2016, of whom 89 percent were approved.”

Section 212(f) of the Immigration and Nationality Act says, “Whenever the president finds that the entry of any aliens or of any class of aliens into the United States would be detrimental to the interests of the United States” the president can keep them out for “such period as he shall deem necessary.” Trump seems to have backed away from campaign proposals to ban all Muslims from entering the U.S. until secure vetting procedures are in place, but any president has the authority under existing law to make a finding affecting legal immigration.

In a CBS 60 Minutes interview broadcast Sunday evening, Trump gave a strong indication of where his executive actions will focus initially:

LGBT Rights—There are a variety of executive actions that expanded LGBT rights under the Obama administration, including protections against discrimination in housing and health care, as well as barring discrimination by federal contractors in their dealings with LGBT employees.

In 2014, the U.S. Department of Education issued new “guidance” interpreting Title IX of the Civil Rights Act as prohibiting discrimination against transgender students by forcing them to identify based on their biological gender rather than their personal gender identity.

Climate Change and Energy—The UN Paris Climate accord, which Obama ratified on behalf of the U.S. in September, could be dead on arrival in a Trump administration. Although the accord’s provisions call for a three-year process for a signatory nation to withdraw, President Trump has the option to simply not implement the accord’s provision. The U.S. Army Corps of Engineers will likely be directed to complete construction on the last section of Dakota Access oil pipeline beneath the Missouri River at Lake Oahe near the Standing Rock Sioux Reservation. It is also likely that the far larger Keystone XL pipeline project will receive more favorable administrative treatment. The EPA regulations involving the use of coal in electricity generation, referred to as “the war on coal” by detractors, will be vulnerable as well.

Healthcare—Complete repeal of the Affordable Care Act (ACA, or Obamacare) will require legislative action. However, Trump administration officials could immediately decide against efforts to support private insurance companies and state-based nonprofit health insurance cooperatives. Insufficient premiums and higher than expected claims have resulted in losses far greater than expected, and a “risk corridor” funding system in the law has been far from adequate to make up the shortfall. Medicaid expansion could be materially affected through administrative changes in interpretation of waiver applications and state-based Medicaid practices, especially in states than elected not to expand Medicaid under the ACA.

Trade—The pending Trans-Pacific Partnership (TPP) agreement will not be approved in its present form. Trump has proposed amending or rescinding NAFTA, which was approved in the 1990s. He has also said he’ll direct the Secretary of the Treasury to declare China a currency manipulator and implement excise taxes on Chinese-made goods to counteract the effects of alleged manipulation. An excise tax of 45 percent has been widely quoted, based on an example Trump made of what level of currency manipulation may be determined to be present.

Foreign Policy—Recent normalization of relations with Cuba could be in jeopardy, potentially jeopardizing future initiatives like the 2015 foundation grant to preserve a Hemingway residence. The Iran nuclear deal is just that—a deal, not a Senate-ratified treaty, so Trump is able to demand renegotiation or decide to cancel the agreement and reinstitute economic sanctions. However, doing so may upset American Jews, who overwhelmingly expressed support for the agreement.

There are risks in some or all of these potential executive actions the incoming Trump administration is poised to perform or is at least contemplating. Many people, including nonprofit leaders, are unaware of how many perceived changes in law over the past several years were not, in fact, changes in law, but rather changes in far more vulnerable administrative rules. The plea for continuity between administrations is reminiscent of the constitutional principle of stare decisis, which encourages new legal decisions to be interpreted in the context of previous legal decisions, thereby promoting a gradual change in specific laws that is more likely to build respect for and obedience to the law in general. The dilemma with governing by executive action is not only that people dissatisfied with the executive actions can sue, but also that they can delay action to comply and wait for the next administration to make desired changes, meaning that executive actions and administrative rules lose the respect they might have had were they more judiciously created and/or rescinded.

The nation is learning that government by executive action, not supported by legislative approval, is as tentative as the electorate and as fleeting as each successive administration deems it should be. This almost overwhelming thought should serve as a call to carefully considered action.