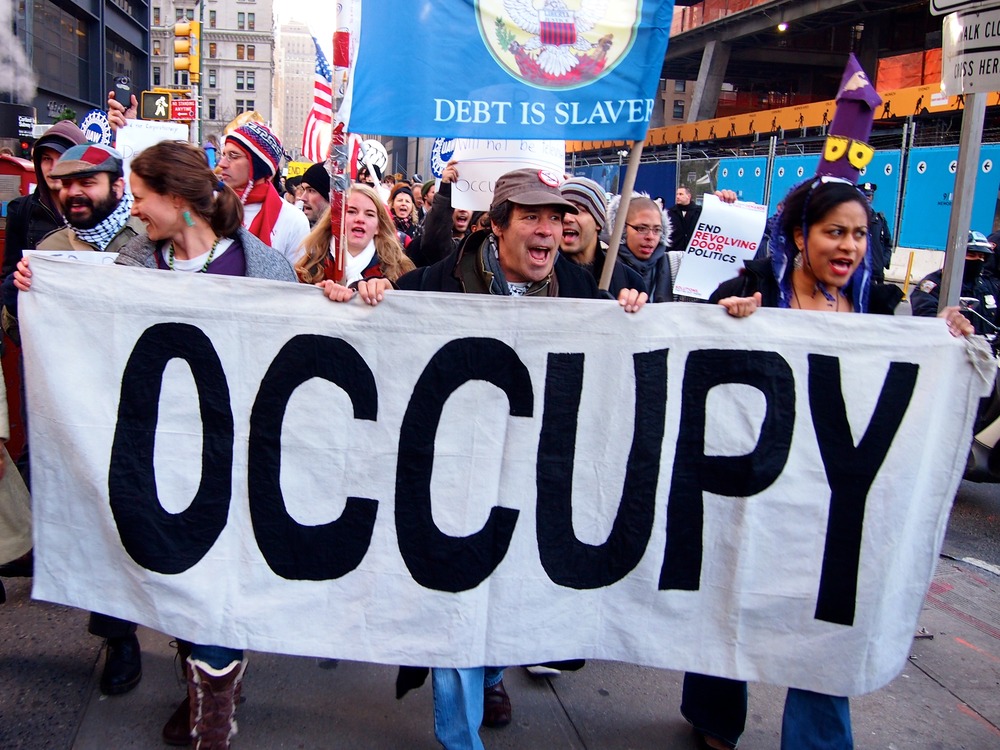 It is just about six months since the Occupy Wall Street (OWS) movement started in lower Manhattan—and Occupy Wall Street is running out of money. According to one source, Occupy Wall Street raised over $700,000 between its start and early January, and there was still around $300,000 in the OWS accounts in January. However, donations were reportedly beginning to trickle in at a rate of only a few hundred dollars per day, while the expenses of providing food, laundry, and other costs for maintaining the protests are higher.

This Boston Globe report says that Occupy Wall Street, at least the New York City part of the Occupy movement, is about to run out of cash. A finance report given to the OWS General Assembly reported only $45,000 left in the OWS account with weekly donations having “plummeted to about $1,600,” higher than the few hundred dollars a week reported by the New York Post in January. The report concludes with the warning, “At our current rate of expenditure, we will be out of money in THREE WEEKS.”

We looked at the finance report for March 2nd posted on the OWS General Assembly website, which contained the following on OWS resources and cash flow:

Not surprisingly, there’s some struggling going on to explain the expenses and to find new funds.  One comment that appears to be posted by an Occupier complains that “Very little of the spending goes toward movement building. It is all overhead. This means that as a non-profit OWS is VERY inefficient — very little of the donor dollars goes towards actual programs.” The commenter then cited Charity Navigator for a definition of an efficient nonprofit.  Of course, this may be a small reach since what constitutes a program expense is a matter of interpretation based on the program design.

Some online donations to Occupy Wall Street are processed by the Alliance for Global Justice, which acts as Occupy’s fiscal sponsor, but one commenter asked, “Whats going on with Allinace for Global Justice are they really taking 10% off the top?” Others inquired about a commitment that some of them believe that OWS has from the Ben & Jerry Foundation for $1.8 million, but this funding is to come via an entity called the Movement Resource Group (MRG), and its website suggests that MRG will fund projects, not necessarily basic Occupy operating costs.

Does money affect a social movement? Of course. Just look at the minutes of the OWS General Assembly discussion from March 8th. Someone suggested that the remaining money should be moved to the OWS bail fund, given more OWS actions planned with the likelihood of arrests. One person then suggested, “lets try and control ourselves and avoid arrests if possible.” A vigorous tweet-based discussion on March 9th revealed discussion of a spending freeze, concerns about OWS’s financial controls and transparency, and suggestions for some short-term revenue raising strategies.

Will Occupy spend itself out of existence in three weeks? Probably not. These reports of its financial challenges will probably attract some new donors, and the March 2nd financial report may lead to discussions of a stronger set of fiscal controls, perhaps even the discipline of a more formal budget. Perhaps OWS will also try to rein in costs that some people in the General Assembly and online think might be excessive or not warranted.

It sounds like a young nonprofit debating how to get through its financial crisis with no particular silver bullet solution in sight.  –Rick Cohen