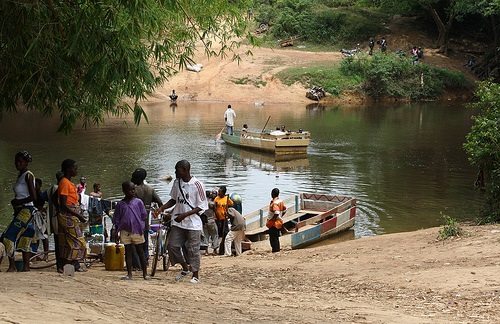 Joining the ranks of the Iranians and Matt Damon, residents of the Ivory Coast in Western Africa have come up with their own version of the viral Ice Bucket Challenge, but for a cause that you would not expect.

Individuals have been using the Soap Bucket Challenge as a way to encourage good hygiene and awareness of how to help prevent the further spread of Ebola, the often-fatal viral illness spread through direct contact with the bodily fluids of an infected individual. NPQ has been following along with the international health crisis since it began spreading rapidly through West Africa over the summer, most recently assessing whether hospitals trying to treat the infected were actually making the epidemic worse.

While building off the success of the Ice Bucket Challenge, instead of dumping ice water over their heads, participants douse themselves in soapy water. Further, instead of contributing monetary donations, the challenge asks individuals to send in shampoo and soap. The “Soap Bucket Challenge,” as it is called, has also generated an active social media presence with the Twitter hashtag #MousserContreEbola, French for “Lather Against Ebola.” As the disease has not yet reached the Ivory Coast, residents are undertaking these efforts to ensure the health of the region as they watch the illness ravage surrounding countries.

Edith Brou, a prolific and popular Twitter user in the region, created the modified challenge last month. She posted a video on YouTube conducting the challenge and then asked three other famous bloggers from the area to do the same.

“Lather Against Ebola” is an interesting reinvention of the original challenge and continues the recent trend in using social media to reach masses of people, particularly for social causes. NPQ recently commented on the trending hashtags #WhyILeft and #WhyIStayed after the Ray Rice scandal and how their massive outpouring of stories through tweets and posts has personalized domestic violence in a way it may not have been.

With the already comprehensive news coverage the epidemic is receiving, this additional social media engagement may actually help prevent the epidemic from spreading, given the compelling yet simplistic and educational message: lather, rinse, and repeat.—Shafaq Hasan