Krispy Kreme and the Kid’s Clinic: Bad Decisions in the Development Department 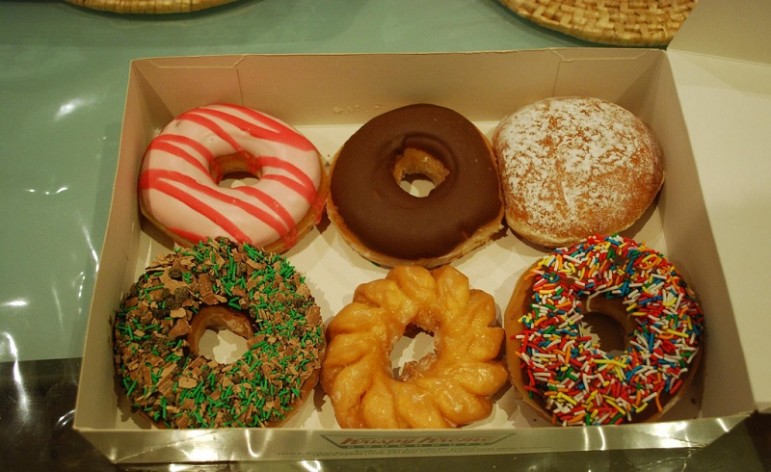 After a University of North Carolina children’s health clinic was renamed the Krispy Kreme Challenge Children’s Specialty Clinic earlier this month, some got ready to protest the hypocrisy of yet one more health institution branding itself to a fast food company.

Just to put a fine point on it all, the clinic treats feeding and swallowing issues and consults on diabetes, which naturally is an odd match for Krispy Kreme as a corporation. But! The clinic protests, you’ve got us all wrong! It is not the corporation that is backing the brave work of the clinic, but the proceeds of a student race where participants must eat 12 Krispy Kreme donuts in the course of running five miles in an hour. The race is called the Krispy Kreme Challenge.

A much better fit.

“We’re disappointed that a small minority of people have jumped to that conclusion,” a clinic spokesperson said, referring to the unreasonable idea that the name implies anything to do with Krispy Kreme. “They couldn’t be more wrong.”

The Krispy Kreme Challenge (race) has since 2006 raised nearly $1 million for the clinic and plans to raise another million by 2020, according to the press release.

Meanwhile, just to bring this story home, we’ll borrow from a Gawker article on this situation that cites a paper published in the Science of Aging Knowledge Environment in 2002 about the effects of Krispy Kremes on diabetic mice:

Eat a Krispy Kreme doughnut, and feel your blood sugar soar. In response, the pancreas produces insulin, which tells muscle, fat, and liver cells to soak up the sweets. Insulin sets off a chain reaction when it attaches to a cell surface receptor. The receptor adds a phosphate group to other proteins, which enables them to prod cells to absorb sugar and store it. As sugar concentration in the blood falls, liver cells take up insulin to shut off this response.

But the clinic does not treat mice; it treats children, so this article in the New York Times may better illustrate why one might not wish to link a children’s clinic dealing with eating and diabetes to Krispy Kreme or any highly sugared food. The article describes the results of a study of 43 children who were obese and getting an average of 27 percent of their calories from sugar. Researchers lowered their sugar intake to 10 percent of their calories, keeping the calorie count the same overall, and:

On average, the subjects’ LDL cholesterol, the kind implicated in heart disease, fell by 10 points. Their diastolic blood pressure fell five points. Their triglycerides, a type of fat that travels in the blood and contributes to heart disease, dropped 33 points. And their fasting blood sugar and insulin levels—indicators of their diabetes risk—likewise markedly improved.

NPQ has often discussed the need to align fundraising with organizational mission so that it does not, in fact, contradict that mission. This is a good example of what a little inattention can do to create bad press. The students should be thanked profusely, and maybe the Krispy Kreme Challenge event could be linked to the clinic in some less central way. That in itself would not be a problem, though some might argue otherwise, but rebranding the clinic this way is that final step too far.—Ruth McCambridge

Thanks to Martin Levine for his contributions to this article.