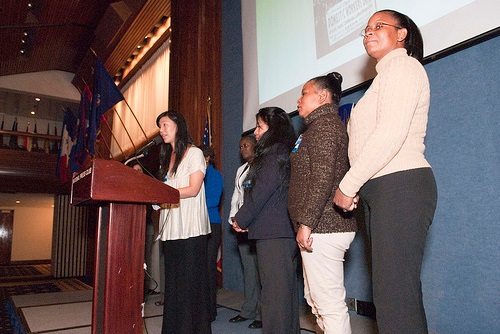 Amidst the rallying of fast-food workers at McDonald’s and Wendy’s and at low-wage retail chains like Walmart, another organizing effort was going on for a particularly exploited category of workers, and today it has succeeded. According to AP, “the Obama administration approved new rules Tuesday that extend minimum wage and overtime pay to nearly 2 million home healthcare workers who help the elderly and disabled with everyday tasks such as bathing, eating or taking medicine.”

Is it a victory to provide minimum wage protections to home healthcare workers? Realize that since 1974, home care aides have been excluded from the protection of federal wage and other statutes. Federal law classified them as akin to neighborhood baby-sitters performing what is called “casual employment.”

Who protested against the Obama Administration’s decision? The healthcare companies—an $84 billion industry—that employ these low-wage workers. They argued that the minimum wage and overtime requirements would, according to AP, “make it tougher for families to afford home care for their aging parents” and “reduce the quality of care and even lower the take-home pay of caregivers if companies decide not to send workers out for shifts longer than eight hours.”

At an average wage of $9.70 an hour, home healthcare aides—90 percent women, 30 percent black, 12 percent Latino—are just about automatically qualified for food stamps and other federal benefits as a result of their incredibly low wages. In other words, it is the American taxpayer who subsidizes the incredibly profitable companies’ ability to pay these abysmally low wages. As the National Domestic Workers Alliance showed in a recent study, one-fourth of home healthcare aides are paid less than minimum wage. It may appear that we are helping the home healthcare workers, but taxpayers are actually helping maintain the aides’ employers’ profitable bottom lines.

What makes this important for nonprofits is that the leadership of this campaign that achieved the most important breakthrough in the conditions of low-wage workers so far during the Obama Administration came from the nonprofit sector. Organizations such as the National Domestic Workers Alliance, whose director, Ai-jen Poo, NPQ profiled some time ago, Caring Across Generations, and the Paraprofessional Healthcare Institute, among other organizations conducted admirable, nose-to-the-grindstone organizing to achieve this victory. Their campaign will probably be seen as a model for other efforts to improve labor and workplace conditions for low-income workers.

However, it’s going to be a slow roll-out for these rules, no matter what. Although President Obama first announced his support for these changes two years ago, the new rules approved just now won’t take effect until January 2015. Why? We don’t really know. Typically, new federal rules take effect 60 days after final approval. It is quite striking that even with a landmark provision to protect millions of home healthcare aides, somehow the administration was willing to extend their potential mistreatment by some employers for another 15 months.