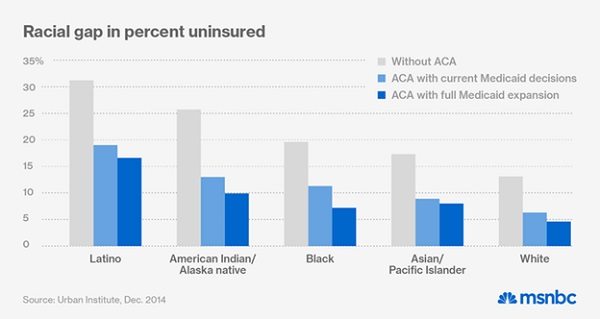 Why is the Medicaid expansion so important? Over half of blacks live in states that did not expand Medicaid in 2014. Without the ACA, the uninsured rate for blacks is 19.6 percent. As the ACA is currently structured, with 27 states and the District of Columbia having chosen to expand Medicaid, the rate is projected to drop to 11.3 percent. But if all states expanded Medicaid coverage, it would be down to 7.2 percent. For Latinos, even with the exclusion of undocumented immigrants from ACA coverage, the gains from Medicaid expansion could be dramatic, especially if Texas were to expand Medicaid.

This study puts a major question in front of nonprofit advocates and state governments. Should the states reject the almost totally federally paid-for Medicaid expansion due to the reduction of Medicaid subsidies for expansion some years down the line, a budgetary concern voiced by some critics of the ACA version of Medicaid? Or should states do a different calculation that weighs budget costs against the cost of healthcare treatment for various populations whose lack of insurance coverage would mean that they would be generating health treatment costs in hospital emergency rooms and in communities overall? Are nonprofits willing to put their advocacy mettle behind all-state Medicaid expansion because of the better health care outcomes for blacks (and Latinos), or will they take a pass on that issue because of potential state budget consequences further down the line?—Rick Cohen