This article is, with publisher permission, adapted from a more extensive journal article, “The Generativity Mindsets of Chief Executive Officers: A New Perspective on Succession Outcomes,” published last year by the Academy of Management Review.

What determines a company’s readiness for navigating a CEO transition? Our proposed answer builds upon prior research on CEO succession, viewed through a novel theoretical lens based on generativity theory and the mindset of the exiting CEO.

We assess exiting CEO stances by focusing on two key dimensions: a) the CEO’s degree of commitment to developing the next generation of company leadership, and b) the CEO’s degree of need to control the succession process and outcome. A given CEO’s place on these two dimensions generates an overall “generativity mindset.” 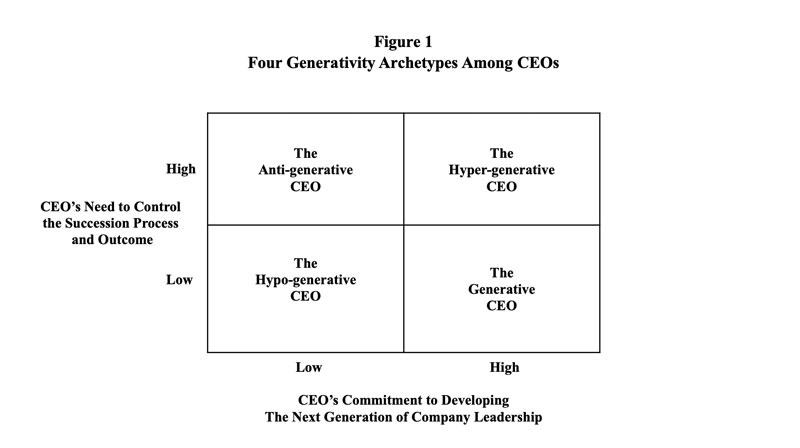 The final part of our model inserts the board of directors as a potentially moderating influence in all the foregoing relationships. In some cases, the board will encourage the CEO to join it in comprehensive preparation for his or her eventual departure. The greater the board’s commitment to succession planning, the more that hyper-, hypo-, and anti-generative CEOs will behave like generative CEOs, but their attainment of this ideal will vary widely. Our overall model is portrayed in Figure 2.

Even boards that are committed to careful and comprehensive succession planning cannot do so without the involvement of their incumbent CEOs. And since these individuals have varying personal philosophies about their eventual replacement, boards encounter various dilemmas in working with—or working around—their CEOs on succession-related matters.

The Concept of CEO Generativity

Although all CEOs face the prospect of eventually leaving their positions, their responses to this inevitability vary greatly. Before proceeding, it is important to distinguish generativity from the related concept of one’s desire to leave a legacy, or one’s legacy motivation. While a legacy motivation amounts to one’s (nearly universal) desire to make an enduring contribution and to be remembered for that contribution, generativity, based on psychologist Erik Erikson’s influential work on this topic, involves a personal striving to make a very specific type of contribution: mentoring, nurturing, and developing the next generation for its own primacy.

Like other humans, CEOs may indeed have strong needs to leave enduring signs of their handiwork. For CEOs, such legacies might be manifested in the brands, balance sheets, products, technologies, and physical facilities that survive them. It is quite another thing, however, to be intent on developing the people—or a specific person—who will be one’s replacement and help oversee this broader legacy.

One’s tendency toward generativity is triggered by a recognition of mortality and a desire to form intimate bonds with the future generations. Applying this dimension to the CEO context, we envision CEOs as varying in their degree of commitment to developing the next generation of firm leadership. Among CEOs, this commitment would be manifested in a CEO’s mindfulness about eventual departure as well as concerted involvement in helping to prepare the next round of leaders.

An absence of such commitment would be manifested in a CEO’s inattentiveness to, or even resistance to, eventual departure, as well as a failure to prepare the next round of leaders. These latter CEOs may be excellent in many aspects of managing and leading, but they are not attuned to identifying or developing their successors.

Combined, this provides two dimensions—the degree to which CEOs prioritize leadership development and the degree to which they seek to control the succession process. CEOs can be high or low on each, resulting in four distinct orientations.