Nightmarish Ugandan Anti-gay Law Has Roots in the U.S. Right 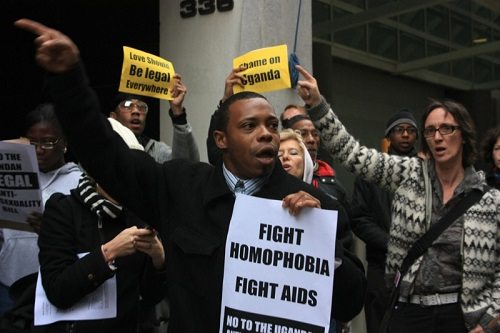 An criminalizing homosexuality was passed by the Ugandan parliament last week after years of discussion, although it has not yet been signed into law by Uganda’s president, Yoweri Museveni. He has thirty days in which to make that decision, and in that time he is likely to hear a lot from the rest of the world about the law and the possible consequences if the law is enacted.

Original proposals had “carnal knowledge against the order of nature” punishable by death, but the law that passed provides as punishment for “aggravated homosexuality” life in prison. It also sets out prison time for those who do not report gay acts or who rent to a gay person, etc. The “promotion of homosexuality” is also a criminal offense, threatening all activists and organizations working on the issue.

Right Wing Watch writes that the law has had enthusiastic support by religious right leaders in the U.S. It reports that Martin Ssempa, a Ugandan minister who championed the bill over years, has received support from U.S. religious right figures “like Lou Engle and Scott Lively , who is facing a human rights lawsuit brought by Sexual Minorities of Uganda. ‘This human rights crisis was made here in the United States,’ says Tarso Luís Ramos, Executive Director at Political Research Associates.”

Digital Journal reports that David Bahati, a devout Christian and the member of Uganda’s parliament responsible for the “Kill the Gays” bill and its current incarnation “is a member of ‘ The Family ,’ also known as ‘The Fellowship,’ a secretive and powerful U.S.-based evangelical sect that has been sending money and missionaries to African nations, including Uganda, to promote anti-gay public sentiment and legislation. According to Ralph Stone of the San Francisco-based Fog City Journal, ‘the Family and other anti-gay groups have long viewed Uganda as a laboratory to experiment with Christian theocracy.’”

As an aside, NPQ and others have touched on reports of a connection between “The Family” and “Invisible Children,” though after those reports hit the press, Invisible Children vehemently denied any anti-gay sentiment in its organization. See “ Why did Kony 2012 Fizzle Out? ” for more.

In Digital Journal, we read that Kampala gay rights activist Frank Mugisha says, “It will open a new era of fear and persecution. If this law is signed by President Museveni, I’d be thrown in jail for life and in all likelihood killed.”

Calls are being issued to withdraw aid if the bill is signed into law.—Ruth McCambridge