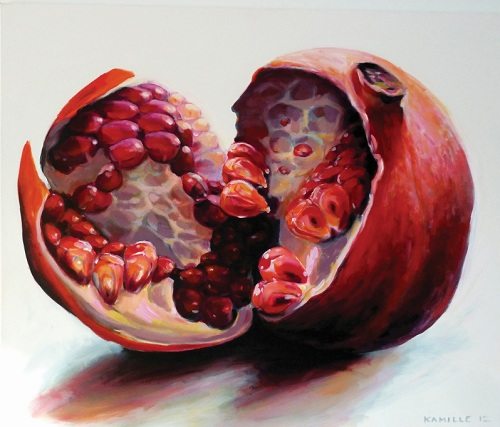 Editors’ note: This outline of some of what is known about state taxes is not comprehensive, but it indicates how diverse the tax picture is from state to state. It should be a reminder that as complex a challenge as federal tax reform may be, it is in some ways made immensely more so by both the interactions of state and federal tax systems and the nonprofit sector’s disunited, unintegrated advocacy approach to state taxes.

On Washington, D.C.’s Capitol Hill, charities have been involved in an all-consuming debate over the future of the federal charitable tax deduction. But can nonprofits effectively participate in the national debate over taxes and expenditures if they don’t know what is happening at the state level? There are fifty states with budgets that are paid for by taxes—fifty different states with fifty different mixes of tax rates, tax deductions, and tax credits. Understanding the mix of state tax regimes is crucial to nonprofit public-policy literacy.

There is no one definitive reference source for nonprofits on the impact of state tax climates on the sector. Unlike at the federal level, at the state level there is a panoply of tax policies that both directly and indirectly affect donations to public charities. While there is one federal income tax rate, there are wide variations among the states regarding their marginal rates, with a handful of states having no income taxes at all. And some states offer individuals and corporations tax credits, not just tax deductions, to incentivize contributions to the nonprofit sector.

Overall, states differ in their willingness to use their tax powers to promote policy objectives for nonprofits and the communities they serve. Unlike the microscopic attention nonprofits pay to federal tax policy issues, there is much less understanding of the complexities of state tax policies. Are nonprofits conscious of the differing tax climates affecting citizens and communities in the various states? How can nonprofits better grasp state attitudes toward taxes in order to craft effective state tax advocacy strategies?

What characterizes state tax systems? While most people would probably think that the answer is income taxes, the largest source of state tax revenues as of 2011 was sales (and gross receipts) taxes (48.4 percent), followed by personal and corporate income taxes (39.5 percent), license taxes (6.8 percent), and all other state (gift and estate) taxes (5.3 percent).1 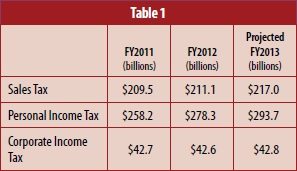 More surprising to many people, individual income taxes are much larger as a revenue source than corporate income taxes—between six and seven times as much in both FY2011 and FY2012 and projections for FY2013 (see table 1).2 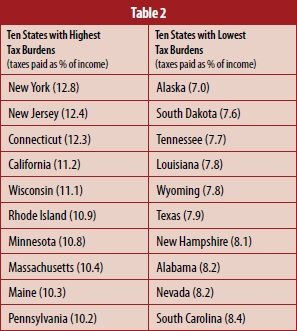 Table created by the author, based on information from USA Today (March 2, 2013)

One dimension of a state tax climate is how much of a burden taxpayers face from state to state. USA Today ranks states by the combination of state and local tax burdens relative to their per capita income for fiscal years FY2010 to FY2012 (see table 2).4

These tax burden rankings are likely to change, with recently enacted tax increases or decreases in specific states, such as: California’s personal income tax increase for tax years 2012 through 2018 (projected to raise $4.735 billion in new revenues in FY2013 alone); New York State’s addition of three new tax brackets for taxpayers with incomes over $150,000 (aiming to bring in $1.931 billion in new revenues in 2013); and, in contrast, Ohio’s reduction in personal income taxes (-$446 million compared to FY2011) and the consolidation of tax brackets in Kansas (-$249.2 million).5 But the overall result is that the “high tax” states are largely in the Northeast and Mid-Atlantic, where state governments tend to provide more state aid to localities and state programs for the poor, and the “low tax” states are in the Southeast and Southwest, along with South Dakota and Alaska, where the scope of state government is smaller. (Alaska has the extra benefit of a huge infusion of oil tax revenue from the Trans-Alaska Pipeline knocking its need to rely on other tax sources way down—similar to North Dakota, which has also reduced its tax burden thanks to burgeoning oil shale revenues.)6 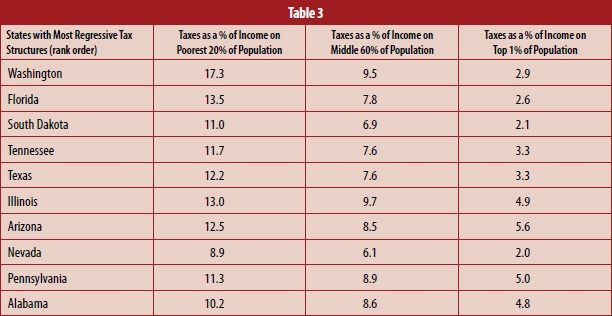 Taxes as shares of income by income for non-elderly residents. Institute on Taxation and Economic Policy, Who Pays? A Distributional Analysis of the Tax Systems in All 50 States (November 2009)

But tax burden is a gross indicator that reveals nothing about state tax fairness, which may be a much more important indicator of state tax climates (the extent to which state tax regimes are progressive or regressive in terms of their distributional equity). Unfortunately, according to the Institute on Taxation and Economic Policy’s November 2009 study of tax equity in the states, “nearly every state and local tax system takes a much greater share of income from middle- and low-income families than from the wealthy.” State and local tax burdens are extremely regressive in their treatment of (non-elderly) families (see table 3). Given that the states basically all lean more regressive than progressive in their tax systems, which are the most regressive?7

The overlap between the states with low tax burdens and those with regressive tax systems is self-evident: four of the regressive states rely highly on sales taxes and excise taxes; six lack broad-based personal income taxes. The least regressive locations, including New York, Vermont, and the District of Columbia, rely much more on income tax systems that tax the wealthier more and rely less on consumption taxes such as sales and excise taxes.8 Tax progressivity is enhanced by income taxes and diminished by consumption taxes.

Taxes with a Purpose

Taxes can be a tool to accomplish social objectives, as the notion of progressive and regressive tax regimes implies. Whether states choose to use taxes to help the poor or to promote public purposes adds another dimension to the picture of their tax climates. Important tax tools include income transfer mechanisms, such as state Earned Income Tax Credits, Child Tax Credits, and Child and Dependent Care Tax Credits, as well as taxes—such as those on liquor and gasoline—intended to discourage certain behaviors.