Obamacare Implementation—At Least as Many Questions as Answers 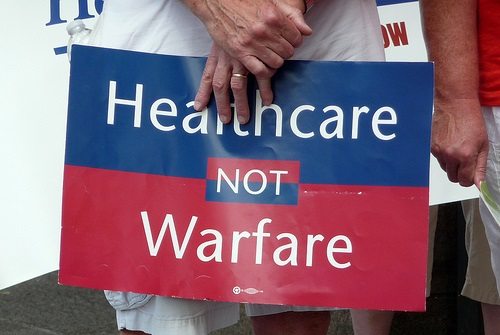 The Patient Protection and Affordable Care Act was signed into law in March 2010. Often referred to as the ACA or Obamacare by both supporters and opponents, the complex law is still mysterious to most Americans even as individual enrollment begins October 1st. Although many thousands of pages of regulations have been written, websites built, federal employees and contracted “navigators” trained, countless follow-up congressional hearings held, and news stories written, most Americans are unsure about what the law says and what it means when it comes to meeting their own healthcare needs.

At a rural healthcare conference for hospital executives and board members almost a year ago, one national expert compared the ACA’s transition from a pay-for-procedures model to a pay-for-wellness model to a person with one foot on a dock and the other in a boat. They know they have to make the leap, but they choose to wait until the last possible moment to make the shift while avoiding falling in the water.

This hesitation, even among healthcare professionals, has been the result of several factors, from uncertainty about the details of the post-ACA future of reimbursements, revenues, patient loads, and provider availability, to the various legal challenges to the law and the delays in publishing the preliminary and final regulations upon which hospitals, doctors, insurance companies, and others will establish or revise their own business practices and pricing models.

One example of what has happened is the ACA’s requirement for nonprofit hospitals to perform a community health needs assessment (CHNA) at least once every three years. The requirement took up less than two pages in the ACA law, and it took the IRS more than a year to issue preliminary guidance for hospitals. The IRS has yet to issue final regulations on CHNAs, despite the fact that the deadline has already passed for most nonprofit hospitals to comply with the CHNA requirement. What happened? Many hospitals waited until the last minute to comply, often doing a hasty marketing study that really didn’t satisfy the requirements. Some public health departments insisted that CHNAs were intended to align hospital action plans with existing public health goals and initiatives, based on the ACA’s requirement that public health experts be consulted by hospitals when performing CHNAs. One state hospital association executive told their member hospitals that they should plan to write a $50,000 check to the IRS for the excise tax owed for failure to complete a plan, as many of their member hospitals had failed to initiate assessments within a month of the deadline.

Slightly more than half of states elected not to establish state-based insurance exchanges under the Affordable Care Act. This was something of a surprise to federal regulators, who had planned on all states to rush to set up their own exchanges. The federal government had to build its exchanges, initially conceived as a backstop for the state exchanges, to be sufficiently robust to accommodate residents in much of the country. Progress on the federal exchanges, like progress on many aspects of healthcare reform implementation, was unclear due to optimistic reports from reform advocates and horror stories from opponents.

Medicaid expansion is another area where everyone was surprised. The ACA envisioned a healthcare market where states would be compelled to expand Medicaid coverage for poorer Americans. Under this expectation, the federal government would pay for 100% of the states’ expansion costs during implementation in 2014–2016, with the federal share of the expansion leveling off at 90% after 2020. The U.S. Supreme Court upheld the constitutionality of the Affordable Care Act in June 2012, but it voided the mandatory Medicaid provision, ruling that states must have the option to expand Medicaid or leave it as it is without the threat of losing all Medicaid dollars if they choose not to expand coverage.

About half of the states have chosen not to expand Medicaid coverage. South Dakota is one example of a state that delayed a decision pending a study by a state-commissioned task force. The task force’s final report was issued in mid-September. The panel was instructed to avoid making any recommendations, but rather to investigate and synthesize the available data and community perceptions both in favor and opposed to Medicaid expansion in the state. The report is intended to inform the South Dakota governor and legislature as they take up the issue at the next legislative session in January 2014. In addition to reporting on the state’s own issues and considerations, the report identifies waiver requests and implementation experiments in other states that might be attractive to South Dakota. The report highlights the opportunity states have to negotiate waivers and conditions for Medicaid expansion because the Centers for Medicare and Medicaid Services (CMS) is motivated to see all states adopt Medicaid expansion.

South Dakota has not yet expanded Medicaid and it has not established a state exchange. However, it has certified three healthcare exchanges—all nonprofits—for medical services. Two of the three, Avera and Sanford, are owned by the multistate, multibillion-dollar regional hospital networks headquartered in Sioux Falls. The third exchange is owned by Dakotacare, the insurance company owned by the state’s medical association. While Dakotacare’s insurance products have traditionally included over 90% of their providers as “in network,” the hospitals’ insurance generally restricts “in network” designation to providers employed by their respective hospitals and clinics. Wellmark Blue Cross Blue Shield, based in Iowa, is one of the largest health insurers in South Dakota. However, it has decided to delay opening an insurance exchange in South Dakota. For now, South Dakotans seeking insurance on the new exchanges are restricted to the federal option and plans owned by either a hospital system or the state medical association.

Business leaders and administrators attending “how to prepare for healthcare reform” seminars often leave more confused than when they arrived. Many small businesses, especially service businesses, are reacting by maximizing part-time employees and actively considering paying the relatively modest first-year penalties for not providing coverage to employees who are not already covered. Even so, there is a lot of confusion and misperception among business owners. For example, one owner said recently that not only were most of his employees part-time, but that he has several limited liability corporations (LLCs) set up, each with fewer than 50 employees. It had not occurred to him to seek qualified counsel to verify whether and how his related businesses were affected by the Affordable Care Act.

The ongoing political debate over the ACA and the slow pace of the rollout of Obamacare to the country at large has fostered doubt and uncertainty across the board, with state governments, healthcare professionals, insurers, businesses, and individuals unsure about the details and skeptical that the implementation is ready for prime time. After all, if it were ready to go, why would there be so much controversy and why would so many experts still be saying “We’re not sure yet” about so many parts of the three-year old law? One reaction to uncertainty is to avoid engaging, as has been seen already with nonprofit hospitals’ handling of the community health needs assessment requirement.

Has your organization faced any difficulty in adapting to the changes incumbent with the Affordable Care Act? We at Nonprofit Quarterly would love to hear about your experiences and how you’re overcoming those challenges.