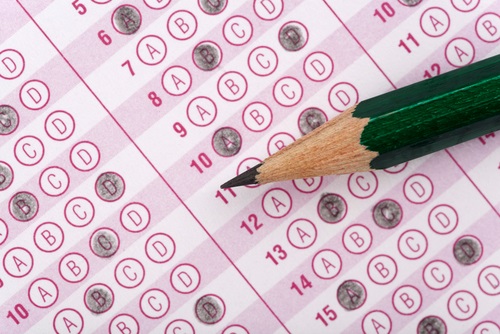 The latest controversy concerning the Partnership for Assessment of Readiness for College and Careers (PARCC) test has been given an Orwellian flavor, but we think it might be more in line with Ray Bradbury’s Fahrenheit 451.

Always at the cusp of breaking stories in New Jersey, former Star-Ledger writer Bob Braun is the blogger whose investigative reporting sparked media coverage of the latest PARCC brouhaha. Earlier in March, Braun discovered that Pearson, the company that developed and markets the PARCC test, has been working hand-in-glove with the N.J. Department of Education to scour social media sites looking for posts by New Jersey students “who may have said something inappropriate about the tests.” Parents and nonprofits have been protesting and organizing against the PARCC tests, but it was on the basis of a tweet from one student, perhaps more, that Pearson apparently issued “a Priority 1 alert” that the security of the PARCC tests had been violated. Although it sounds like Pearson and the state education department were ready to call in the Navy SEALS, the reality was that a high school student posted a tweet at 3:18 p.m., after PARCC testing was over.

The education department explained that the student had posted a picture of the PARCC test, but Braun said authoritatively that was untrue. Rather, the student made a comment about the test—again, well after the test was over—and, according to Braun, the tweet contained no evidence of cheating. The student and the student’s parents nonetheless deleted the tweet after learning about the Department of Education and Pearson monitoring.

The news that Pearson and DOE had turned into Big Brother for high-stakes testing prompted Elizabeth C. Jewett, the superintendent of schools for the Watchung Hills district in Warren, N.J., to email colleagues that she was disturbed to have learned about Pearson’s social media snooping.

“If our parents were concerned before about a conspiracy with all of the student data, I am sure I will be receiving more letters of refusal [to take tests] once this gets out,” Jewett wrote, adding that the state’s education department asked her to discipline (the new word for “punish”) the student-tweeter.

Pearson and the firm it contracted to do the snooping, Caveon, contend that they were simply looking at information available to anyone with a Twitter account. Caveon apparently monitors Twitter, Facebook, and Instagram looking for potential violations of test security. Pearson denied that it monitors students or that it gives a list of students to Caveon to track. Rather, Caveon looks for posts with content connected to the tests and moves from there. Pearson explains that it is actually contractually required by the state to do this kind of monitoring.

But the monitoring isn’t solely about test security and integrity. These corporate trolls also look at “what students are saying about the tests themselves to understand if they think they’re difficult or easy,” according to Gregory Cizek, a professor at the University of North Carolina who is part of a common-core testing consortium.

Illegal? Not likely, as tweets are public information on the Internet. Unseemly? You bet. What might be done with information that identifies specific students as critics of the PARCC tests (or, for that matter, common core testing)? Might the effect be to stifle students’ desire to share critical thoughts about high-stakes tests? Might it chill the students’ free speech given the possibility that students identified by Pearson/Caveon could be tagged for punishment? Does the Pearson/Caveon trolling for critical student commentary impinge on the students’ privacy? Given that PARCC is now in 28 states and the District of Columbia, the New Jersey revelations could reverberate more widely.

There is the Big Brother aspect of spying on students’ use of social media, but there’s a Ray Bradbury element as well—the censorship over the students’ use of the written word, in modern society, which for young people is frequently done through Twitter and Facebook posts. In Fahrenheit 451, Captain Beatty told the morally tortured fireman Guy Montag how best to simplify one’s life amidst the confusion of modern society:

“Give the people contests they win by remembering the words to more popular songs or the names of state capitals or how much corn Iowa grew last year. Cram them full of noncombustible data, chock them so damned full of ‘facts’ they feel stuffed, but absolutely ‘brilliant’ with information. Then they’ll feel they’re thinking, they’ll get a sense of motion without moving. And they’ll be happy, because facts of that sort don’t change.”

That may be the message of the PARCC tests and their social media snoopers. Students, get with the script; just do the damn test and don’t think about it too much. And make sure you don’t post any thoughts about them on Twitter or Facebook. Best to have no thoughts at all, else the social media snoops find your posts and tell your school administrators you need to be disciplined because you might be too much the high-school-aged contrarian or potential muckraker to be considered “ready for college and career.” –Rick Cohen