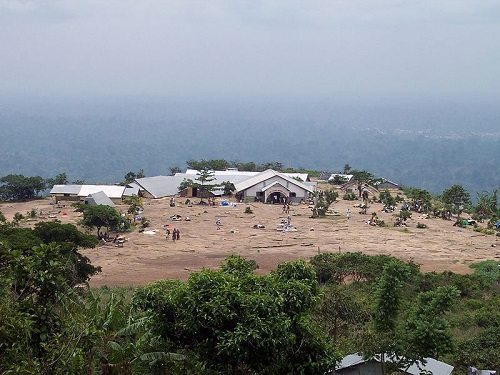 This past November, the United Nations special rapporteur on torture, Juan Mendez, conducted a visit to Ghana to look at the nation’s psychiatric hospitals and “prayer camps” that are used to treat people with mental illnesses. Based on this visit, Mendez raised serious concerns about the warehousing of people with mental illnesses, the use of electro-shock therapy without anesthesia or the informed consent of the patients, and the practice of keeping hundreds or even thousands of people in “prayer camps” associated with Pentecostal and evangelical churches managed by people who call themselves “prophets.”

Writing for The Lancet, Jocelyn Edwards looks at the prayer camps where, she says, “people with mental health problems are chained, beaten, starved, and prevented from leaving.” One camp she described is the Mount Horeb Prayer Centre, created by a self-proclaimed prophet named Paul Nii Okai. According to Prophet Okai’s wife, Rev. Betty Okai, people with mental illnesses voluntarily come to Mount Horeb because “they believe that the power of God can work more than medicine.” The treatment at Mount Horeb, Rev. Okai says, is Bible reading, fasting, and prayer “in the healing name and blood of Jesus.”

Rev. Okai asserts that patients are well treated at the camp, but that wasn’t the finding of a Human Rights Watch team that visited Mount Horeb in 2012. HRW issued a report that described patients being chained, forced to fast for up to 36 hours, and prevented from leaving. Presaging the UN special rapporteur’s findings, HRW found conditions in Ghana’s psychiatric hospitals to be overcrowded and unsanitary, but conditions in the prayer camps much worse, with “nearly all residents…chained by their ankles to trees in open compounds, where they slept, urinated, and defecated and bathed…[and] routinely forced to fast for weeks, usually starting with 36 hours of so-called dry-fasting, denied even water.”

These hundreds of prayer camps are run by “prophets” who have no medical training. The patients’ incarceration may not be quite voluntary, as families often send family members to the camps for treatment because, according to Edwards, many people in Ghana see mental illness as a spiritual problem. More than a fourth of Ghanaians are members of the charismatic and Pentecostal denominations typically associated with these camps. According to Peter Yaro, the director of an NGO called BasicNeeds, in this very religious society, “mental illness is believed by most people to be supernatural and therefore it needs to be addressed by similarly supernatural forces.”

Edwards tells the story of a woman named Doris Appiah who was sent to camps in her 20s with a bipolar condition. In addition to being chained, left outside in the rain, and being beaten, Appiah describes some treatments that sound like waterboarding. It is no wonder that the UN’s expert on torture was sent to investigate the prayer camps. But there is also a non-physical dimension of Ghana’s mental health system—hospitals as well as prayer camps—the perception, according to Appiah, that treatment for mental illness is a stigma. “People think that you are mentally ill because you have done a terrible sin and that is the punishment”, she says.

In 2012, Ghana passed a law to bring the prayer camps into a regime of governmental oversight and regulation. However, in a year and a half since the enactment of the law, the governmental board to be charged with implementation of the law still hasn’t been appointed, so the oversight and training of the camps and their personnel hasn’t even started.

While clearly appalling, the prayer camps are more than centers of mistreatment of the mentally ill. That these Ghanaian camps exist with the awareness of and sometimes under the aegis of some religious institutions and religious leaders is tragic. They reflect the misuse of religion, the abuse of people under the guise of religion, and as such, religious leaders from these denominations involved and from other denominations should be protesting the prayer camps and their so-called mental illness treatments.—Rick Cohen