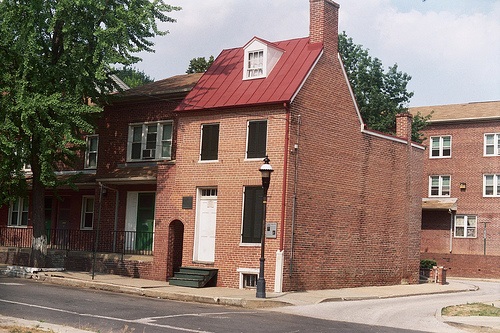 Edgar Allan Poe is known in part for his stories about things that don’t die easily, so the fact that the museum that holds his name has stood on the brink more than once is perhaps not surprising.

The somewhat-plain brick row house dates back to 1830, and a century later, it was nearly razed. But the house was saved by devotees who ran the museum even through the removal of floorboard in the late Seventies and the discovery of skeletal remains* until the City of Baltimore cut its subsidy in 2012, finally taking it over only to close it. But then it rose again and is managed now by a new nonprofit created for the purpose called Poe Baltimore.

Poe’s poetry is a strange combination of unspeakable elegance and plainspoken narration, and it is always good to remember what this sounds like and feels like, just in case we ever want to touch someone with a message they will not forget. So I leave you with this, from his “Alone”

From childhood’s hour I have not been

As others were; I have not seen

As others saw; I could not bring

My passions from a common spring.

From the same source I have not taken

My sorrow; I could not awaken

My heart to joy at the same tone;

And all I loved, I loved alone.

* The remains were found to be of an animal, by the way, but it is thrilling nonetheless.—Ruth McCambridge