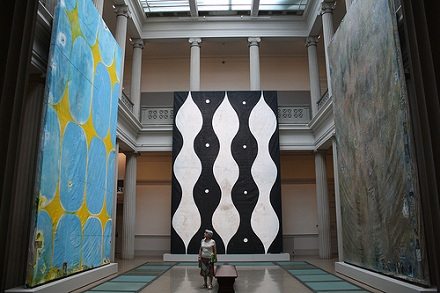 In response to the ongoing challenges of limited space, a sizable budget deficit and a projected cost of as much as $130 million to stay in its historic 115-year old home, the Corcoran Gallery of Art’s board of trustees voted in June to consider proposals to sell its building near the White House and relocate. In addition to ongoing Washington Post coverage, including an editorial highlighting challenges that could come with a move outside the city, the controversy surrounding this issue has also been noted recently in a range of national arts blogs and the question of how the Corcoran Gallery of Art and College of Art and Design got to its current financial state highlights some of the distinct challenges of independent arts organizations in the District of Columbia and throughout the country. The decision to consider a move has also spurred Corcoran “members, students, staff, faculty, alumni, donors and friends” to form a new nonprofit, Save The Corcoran (STC).

The shared sense of frustration that STC has had with the Corcoran board’s decision to explore a building sale is reflected in a Change.Org petition that now has over 3,300 signatures and which implores readers to “halt this misguided effort” by promoting open dialogue with the board. The petition states, “The Corcoran’s proximity to official Washington, DC, has placed it at the center of artistic and cultural discourse for generations…This rich legacy is at risk because of decisions that have been made without any input from the artists, students, faculty, donors and other stakeholders that give the institution its vitality.” In an attempt to respond to calls for open debate on the topic, the Corcoran leadership hosted two emotional public meetings during the month of August.

In an interview with NPQ, STC member and spokesperson Jayme McLellan explains that the “departure point” for her organization is essentially, “Don’t sell the building until you’ve explored all options.” McLellan notes that the board’s June announcement came as a surprise to what has since become STC not only because it suggested the possibility of earlier negotiations on the topic but also because of the absence of any community stakeholders in the decision-making process.

In response, this fast-acting group applied for 501(c)(3) status as an official nonprofit in June, and is now just waiting on official confirmation of their incorporation. In the meantime, McLellan says the group has developed a small budget and is doing most of its work pro-bono with help from advisory board members and other supporters. Looking toward the future, she says that STC would like to engage people in the community “who love art and history and who are the people who would actively pledge support” if the possibility of a sale is taken off the table.

Directly linking the new organization’s purpose to the Corcoran’s mission, STC’s website states, “Art encourages creative thinking and problem solving—and we feel that there is no greater time for creative problem solving than now.” –Anne Eigeman