The Questionable Ethic of an Opt-Out for Recurring Donations: A Caution for Nonprofits 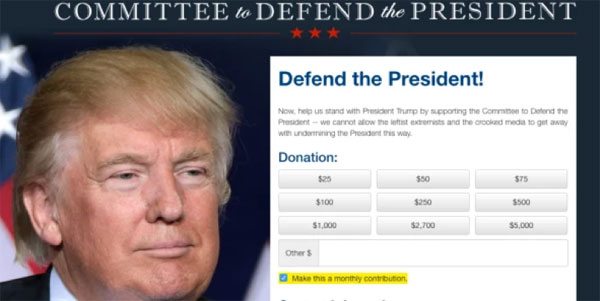 Forget the fact that the nonprofit in question here is the Committee to Defend the President; its practice of automatically signing donors up for recurring donations has, according to BuzzFeed News, landed it in trouble with its donors, who are demanding their unauthorized money back—around $210,000 of it.

“That’s a boatload of money,” said Michael Fraioli, a Democratic fundraiser. “That’s a week of TV,” he said, adding that sum might not even capture the full picture. “If people feel like they reached into their pockets unfairly, they might never come back to make a donation. Why should they trust them?”

The Committee is most commonly associated with an ad that claimed that Trump was “under attack by the crooked media.” It invited listeners to make a toll-free call to “pledge support” for the president. Callers would then be asked to make a “modest” donation. The trouble is that unless you opted out of the recurring donation by unchecking a box they already had helpfully checked for you, you were charged an equal amount every subsequent month.

Donors, especially elderly donors, were unused to the mechanism in fundraising appeals. Thus, Lorraine Norem, 81, and her husband decided to give $100 to the nonprofit voluntarily…and then gave $400 involuntarily, unable to stop the flow until they figured out who was charging their card. “It wasn’t explicit where that money was going,” Norem said. “Financially, we needed that money back.”

Anne-Hart Murrian, an 81-year-old realtor in Knoxville, Tennessee, was charged $25 for 18 months beyond her voluntary donation. The same thing happened with Christy Nelson of Wilcox, Nebraska, who spent $375—$25 at a time for 15 months. She says, “I thought, ‘You now have to watch for something like this every month?’”

Liz Mair, a GOP digital operative, observed that this target group makes the practice more problematic. “Trump’s donor base tends to be disproportionately older; therefore, vision problems and a little bit less tech savvy, so it could come across as misleading or driving them into an activity they’re not OK with,” Mair said.

The Committee’s president, Ted Harvey, doesn’t understand the fuss. Apparently, a number of political nonprofits use this “innovative” method. “The Committee to Defend the President’s donation pages are pretty standard for political fundraising, and in fact this is a fairly common practice used by presidential candidates, senators, congressmen, candidates, national party committees, nonprofits and others.”

And, indeed, there was a spate of articles in the last year about related practices among both Democrats and Republicans. Donors had difficulty cancelling recurring donations to the Trump Campaign even as the campaign was ongoing, and donors were charged by the Hillary Victory Fund after the election was a done deal.

Carolyn Wilcox, 68, of West Virginia, probably speaks for many of those who had to spend time investigating where their money was going and demanding a refund from the Committee to Defend the President when she said, “If I donate again, I’ll prefer to write a one-time check.” Over the months of May and June, the Committee made about 560 refunds.—Ruth McCambridge