Editors’ note: This article, first published in print during Nov-Dec 2017, has been republished for Nonprofit Quarterly with minor updates.

INDIVIDUAL DONORS, FOUNDATIONS, government agencies, and corporations—for over a century they formed the basic elements of any nonprofit’s fundraising plan, in different proportions depending on their work. Today the landscape is increasingly complex with the rapid rise of donor-advised funds (DAFs) not to mention other vehicles like giving circles, grantmaking LLCs, funder collaboratives, social enterprise funds, and others. These new vehicles are helping donors give in new and different ways, but they are often harder to access for fundraisers with less transparency which can make prospecting a challenge. Thy have also turned the staff who help manage and support these DAF programs into increasingly important philanthropic players who you should engage and cultivate in your search for financial support. Given the rapid growth of DAFs (over 270,000 funds hold a combined $78+ billion in assets) 1, how should a nonprofit executive director or fundraiser change their fundraising to respond? As my colleague Michael Moody said in a 2015 article on DAFs in Advancing Philanthropy, “Donor-advised funds are changing the face of giving and we can’t underestimate their impact.”2 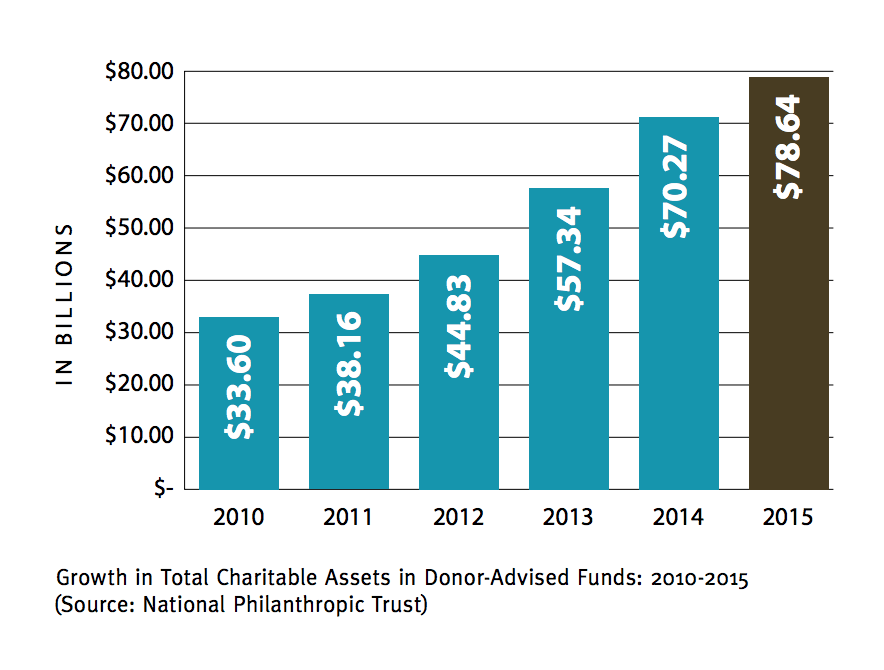 Last year I hosted a workshop on these issues entitled “Navigating Philanthropy’s New Gatekeepers” with nonprofit leaders in Grand Rapids that sparked incredible ongoing conversations. Since then, I’ve had fundraisers across the region and around the country asking for advice as they are pressured to engage with these new funding sources but unsure how to do so. While there are no silver bullet solutions, I offer these initial observations as you start looking to engage with DAF holders and advisors as potential funding sources.

Donor-advised funds are essentially charitable savings accounts, which enable a donor to make a single contribution and receive an immediate tax credit on the gift distributing smaller grants from that pool over time to a range of nonprofits. While DAF assets and grantmaking continue to grow dramatically, the pace at which individual donors give from their DAFs varies since they serve that “saving account” function. So, don’t presume that a donor who establishes a large DAF will automatically be engaged in a lot of giving.

However, with the overall growth of DAFs, every fundraiser should be paying attention to these increasingly important vehicles. Nationally, contributions into DAFs grew over 11 percent to a high of $22.3 billion in 2015. Grantmaking from DAFs to nonprofits also reached a record high in recent years, jumping almost 17 percent to $14.5 billion in 2015. 3 That means grants from individual donors via their DAFs represent almost a quarter of all foundation grants in 2015, a number that is also approaching the total of all giving from corporations ($14.5 billion for DAFs vs. $18.5 billion for corporations). 4 Indeed, The Chronicle of Philanthropy estimates that DAF giving will soon account for one in every ten dollars given by individual donors in the U.S.5 However, most experts agree that the growth of DAFs is not a sign of surging overall generosity but rather a shift in vehicles donors are using to move their money to charity. Ultimately this means there is not a big new source of funding to pursue, but a call to update your fundraising strategies to keep raising funds from the same audiences you’ve engaged in the past. You don’t necessarily need to talk about your work differently or make a different type of pitch, but instead update how you invite people to say yes to your fundraising ask and what steps you take in cultivation and stewardship.

Finally, as we try to assess the type of gift we might seek from DAFs, it’s important to hold in mind the fact that while donors giving from DAFs have varied priorities, they tend to reflect wider trends with the most grants going to religious, education and human service nonprofis.6 Additionally, while there are a small number of DAFs with hundreds of millions or even billions in assets (like Zuckerberg’s famous gif to Silicon Valley Community

GRANTS FROM INDIVIDUAL DONORS VIA THEIR DAFS REPRESENT ALMOST A QUARTER OF ALL FOUNDATION GRANTS IN 2015.

Foundation or the three gifts to DAFs that made Th Chronicle of Philanthropy’s latest top 50 biggest givers list), most DAFs are smaller philanthropic savings accounts. For example, at the Fidelity Charitable Gif Fund, the nation’s largest DAF provider, 61 percent of DAFs held balances under $25,000 while only 7.5 percent held more than $250,000 in balance (even if that 7.5 percent did represent a very large share of total gift).7

THERE IS NOT A BIG NEW SOURCE OF FUNDING TO PURSUE, BUT A CALL TO UPDATE YOUR FUNDRAISING STRATEGIES TO KEEP RAISING FUNDS FROM THE SAME AUDIENCES YOU’VE ENGAGED IN THE PAST.

So just as with other parts of the fundraising landscape, the concentration of wealth shows up in the distribution of assets held in the nation’s donor-advised funds. More charitable dollars are moving through donor-advised funds, and given their unique structures, they merit specific fundraising strategies. But we can likely expect that monies moving through DAFs will follow similar patterns we’ve known for a long time from mid to large individual donors, but now with more structure and gatekeeping to access those charitable funds.

Given the growing importance of DAFs, it’s smart for every nonprofit to start integrating basic good practices about raising money from these funds into your development plans and activities. For example, use language like “advise a gif to us through your donor advised fund” as an option in your fundraising appeals and include “advise a DAF gift in reply devices alongside check/credit card options. Similarly, it’s ever more important to track what type of gift you are receiving so you know how to steward your donors. Record donor-advised fund information in your database so you know how to ask for follow up gift and figure out how to handle multiple relationships to gift so your fundraising reports come out accurately. For example, if I wrote you a check last year and advised a DAF gif this year, both should show up under my name when you generate a “gift in the last two years” report.

Whether they are giving at your major donor “level” or not, opening a DAF is often an indication that someone is treating their giving with more intention than the typical annual fund donor. In most cases, receiving a gift from a DAF should indicate to you that that donor should be treated like a major donor with more information sharing and cultivation attention. It can also be an indication that they may have capacity to become a larger donor with appropriate relationship building. For DAF gift below your internal major donor threshold, you may want to create a new category in your stewardship tracking so you can do more prospect research to determine if those donors are a good fit for long-term major donor cultivation.

Remember: DAFs CANNOT Be Used to Pay Pledges or for Personal Benefit

As DAFs become more common vehicles for giving, understanding the limits on DAFs compared to direct personal giving or even a grant from a foundation becomes more important. 8 A donor cannot legally pledge a multi-year gif from a DAF. 9 You

IT’S EVER MORE IMPORTANT TO TRACK WHAT TYPE OF GIFTS YOU ARE RECEIVING SO YOU KNOW HOW TO STEWARD YOUR DONORS.

can ask a donor to advise a multi-year gif from a DAF (advising $10,000/year for next five years), but just remember that if they say yes and advise a gif that their advice is still not binding on the community foundation or other DAF manager and therefore shouldn’t show up on your financials as a receivable like a personal pledge to give. Another option in this situation might be to ask them to advise a $50,000 gif now which you will internally restrict to using $10,000/year. Another important restriction is that donors cannot use a DAF to buy tickets to a fundraiser where they get a benefit (so if you use text like “all but $XXX of your ticket purchase is a charitable deduction” then DAF funds cannot be used to buy any part of that ticket). 10

A final critical difference between direct gift from donors versus gift they make from a DAF is the potential involvement of one or more staff in the giving process. While the most active or biggest donors may employ a philanthropic advisor to help them with their

BE SURE TO THANK ADVISORS FOR SHEPHERDING YOUR GIFT THROUGH THE PROCESS IN ADDITION TO THANKING THE DONOR THEMSELVES.

giving, the proliferation of DAFs has given more donors access to philanthropic advising than ever before. While large national fund sponsors note that the majority of grant recommendations were completed through online portals (and thus likely with no interaction with an advisor11), at the community foundation level some level of staff engagement is far more common. While they may not make a personal gif to your organization, donor advisors can be an integral part of your fundraising efforts as they work with one or often many donors who might be a match for your organization.

To increase your effectiveness in raising and sustaining giving from donor-advised funds, make sure to thank advisors for shepherding your gif through the process (or recommending you if they proactively helped secure the gift in addition to thanking the donor themselves. Invite advisors to learn more about your organization, offer to share information and resources they might use with their clients, and proactively identify the advising staff at your local community foundation, Jewish Federation, or branch office of key national DAF providers for ongoing cultivation. Rather than seeing these advisors as philanthropic gatekeepers who stand as hurdles to overcome or bypass in your fundraising journey, imagine an engaged donor advisor becoming your ally in fundraising.

Ultimately, raising money from individuals who use DAFs comes down to effectively carrying out an individual donor fundraising campaign with some of the tweaks suggested above. While some have criticized DAFs as capturing philanthropic resources into investment accounts rather than moving these resources quickly out to the nonprofit sector, I take a more optimistic view. Even using the most conservative estimating methods for donor -advised fund payouts, today we are seeing the largest fund providers all exceeding a 10 percent average annual payout level. 12 While we wait to see if future legislation may force a payout requirement on every individual DAF, over all the data tell us that funds are actively moving into and back out of donor-advised funds. So as fundraisers and nonprofit leaders, our biggest challenge and opportunity is to figure out how to effectively integrate DAF fundraising, cultivation and stewardship into our ongoing development work. All that’s at stake is a share of this $14.5 billion pool of donations.

Dr. Jason Franklin is the Founder & Principal of Ktisis Capital through which he serves as a strategic advisor to a mix of progressive individual donors, families, foundations and collaboratives. Previously, he served as the inaugural Kellogg Community Philanthropy Chair at the Johnson Center for Philanthropy, the nation’s first endowed chair focused on community philanthropy. He serves on the boards of the Solidaire Network, Proteus Fund, Michigan Alliance, and Threshold Foundation and is a member of the Grand Rapids LGBT Fund, Smithsonian’s Philanthropy Initiative Working Group, Democracy Alliance, and Threshold’s High Impact Documentary Funding Circle.

Why People of Color Need to Be Good Fundraisers

Why People of Color (Still) Need to be Good Fundraisers

Affects of Income Inequality on Fundraising