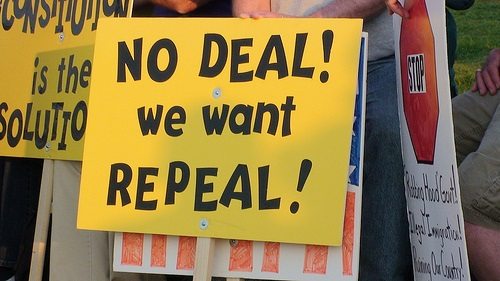 The arguments of the plaintiffs in King v. Burwell, the case in front of the Supreme Court of the United States that could potentially undo the Affordable Care Act, are pretty absurd. That’s the conclusion of the nation’s largest healthcare provider, Hospital Corporation of America (HCA). The company once run by Florida Governor Rick Scott has joined with other business and healthcare providers against the contention of the plaintiffs, a variety of conservative think tanks and religious right-to-life groups, that the Affordable Care Act somehow meant to limit the availability of tax credits and subsidies for health insurance to consumers who got their policies on state-run health exchanges. In other words, the 4.5 million Americans who got their insurance coverage plus subsidies on the federal health marketplace because their states wouldn’t or somehow couldn’t gin up a functional state exchange got those subsidies in violation of the statute. They argue that Congress must have intended the absurd notion of denying federal subsidies to consumers who had no choice but to go to the federal health insurance marketplace.

It is obviously nonsense, at worst a drafting error in the cobbled-together ACA legislation. The Court should reject the plaintiffs’ argument because it would assume that Congress intended to penalize lower income consumers in states that punted their insurance marketplace responsibilities to the federal government.

The intention of the plaintiffs isn’t to identify a flaw in the law and fix it but to bring down the entire program of federally mandated (and for income-qualified consumers, subsidized) health insurance coverage. The case appears to have started with a conference sponsored by the American Enterprise Institute where attendees devised legal strategies to bring down the Affordable Care Act. The Competitive Enterprise Institute, distinct from AEI, was one of the conservative think tanks that took up the challenge of this lawsuit, recognizing that removing subsidies from consumers who got their insurance on the federal exchanges because of the recalcitrance of their home states could potentially make the ACA unworkable, deprive millions of health insurance, and force insurance premiums to skyrocket. In other words, CEI and its allies would victimize lower-income consumers, wiping out their insurance coverage in order to gut the law.

The four nominal plaintiffs for the case, profiled by Stephanie Mencimer of Mother Jones, are represented by lawyers from the Jones Day law firm, the same firm that gave Detroit its emergency financial manager, Kevyn Orr, and earned a fee of $53,726,088 for its work on the Detroit bankruptcy. Their stories are, shall we say, interesting. The lead plaintiff, David King, posts on his Facebook page that President Obama is “the idiot in the White House” and wants to “smash” Obamacare because it penalizes taxpayers to support welfare recipients. Rose Luck is even less restrained in her Facebook posts, calling the president “the anti-Christ” and contending that he was elected because “he got his Muslim people to vote for him.” Plaintiff Brenda Levy doesn’t recall how she became one of the plaintiffs, but is a “prolific writer of letters to the editor denouncing gay rights activists,” according to Mencimer. Mencimer wasn’t able to reach the fourth plaintiff, Doug Hurst, for an interview. Given that these plaintiffs by and large are potential beneficiaries of the ACA and, given their incomes, potential beneficiaries of the subsidies, one wonders whether they get the fact that they are advocating against themselves.

While it is interesting that HCA has weighed in against the right wing-recruited plaintiffs, the array of other interests lined up for or against the plaintiffs and their crusade to bring down the Affordable Care Act involves many nonprofits well known to Nonprofit Quarterly readers:

If you’re simply ideologically opposed to the notion of the federal government trying to make sure that all Americans have healthcare insurance coverage, the amicus briefs in the first column are worth perusing. If you’re interested in the stakes of multiple constituencies—women, people of color, community health clinics, and even healthcare providers like HCA, then the briefs in the second column should be of interest. Sadly, the opponents of the ACA really have nothing coherent and comprehensive to offer in place of the ACA other than denying millions of health insurance coverage and returning them to the ranks of the uninsured. Although some members of Congress have also filed an amicus brief explaining that Congress never intended, wrote, or even hinted that consumers who got their insurance on the federal exchange should be denied access to federal subsidies, there is a lot of legal firepower on the other side hoping that the Supreme Court will do what they couldn’t do through Congress and deep-six this law.—Rick Cohen