Some Tax Extenders Might Actually Be Tax Expanders for Big Business 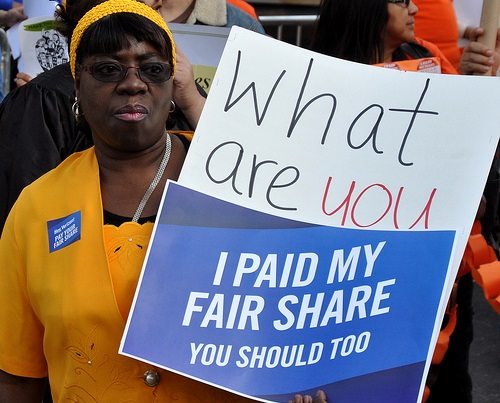 December 1, 2014; Center for Budget and Policy Priorities, “Off the Charts”

One of the crucially important functions of the Center for Budget and Policy Priorities is to uncover dimensions of budget and tax proposals that don’t get a lot of attention in the mainstream press—or from the nonprofit press too, for that matter. A tax policy analyst for CBPP, Chye-Ching Huang, writes that the package of “tax extenders” that the House of Representatives passed and are so fervently sought by many nonprofits and foundations is “worse than first appeared.” Her analysis is that a quarter of the $409 billion, 10-year cost of the package will come from expanding, not extending, tax cuts.

One example is that the “extender” tax credit for research and experimentation, according to CBPP, is really an expander, a doubling of the tax credit to cost not $75 billion over 10 years, but $151 billion. This is a tax incentive that’s a big boon for big business, not nonprofits or foundations. While the House tax extenders bill is only a one-year extension, many in Congress, abetted by intensive special interest lobbying, lean toward making this and other corporate incentives (particularly the Section 179 expensing rules that allow corporations to accelerate tax deductions for certain capital expenditures) permanent. The expansion of the research and experimentation tax credit has had bipartisan approval for some time, notably since the Senate Finance Committee OK’d that provision in the spring based on an amendment offered by Senator Chuck Schumer (D-NY) and Senator Pat Roberts (R-KS) to make start-ups and small- and medium-sized businesses eligible for the incentive even though there’s little doubt about what kind of—and what size—corporations stand to benefit the most.

Congressional public policy is like horse-trading, giving in on this provision of a bill in return for that one. For foundations, the IRA charitable rollover may be the extender that makes the big corporate incentives somewhat easier to swallow. For some nonprofits, perhaps it is the inclusion of the Low Income Housing Tax Credit and the New Markets Tax Credit, both important tools in the arsenals of community development corporations engaged in the revival of low-income neighborhoods.

But for the White House and for Senate Democrats like Harry Reid, the package has too much going to corporations and too little going to help people get out of poverty. If the legislation extended the Earned Income Tax Credit and the Child Tax Credit, both scheduled to expire in 2017, maybe the package might be tolerable. But their fear, we think, is that with the $400 billion revenue loss from this extenders package and no provisions for revenue increases to pay for these credits and deductions, the federal budget picture will look worse a few years from now, making congressional latitude for extending the EITC and the CTC much more difficult and risky.

Are a doubled corporate tax incentive for R&D and a continued expensive accelerated tax incentive for capital expenditures acceptable to the nonprofit sector in order to get the IRA rollover, the LIHTC, improved tax treatment for conservation easements, and the NMTC extended for one year? Will nonprofits weigh in on the total package of extenders or focus only on the pieces that concern them the most?—Rick Cohen