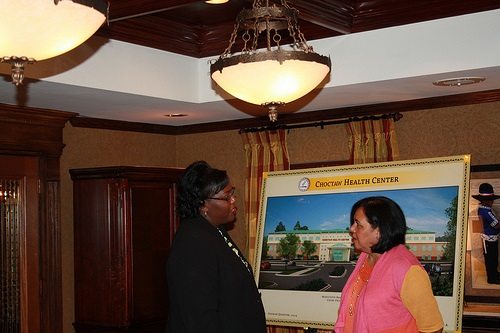 Yesterday, NPQ published a newswire on the effects of decisions by the states to opt into or out of Medicaid expansion. Now, a new report, “Assessing the Potential Impact of the Affordable Care Act on Uninsured Community Health Center Patients: A Nationwide and State-by-State Analysis,” looks at the effect on community health centers. It estimates that nearly half of all of the nation’s 1,128 CHCs are located in states that have opted out of Medicaid expansion, and more than a million CHC patients will be left without health insurance.

“Our analysis shows that if you are poor and live in one of the 25 opt-out states, you are likely to have been left out when it comes to health reform,” says lead author Peter Shin, PhD, MPH, director of the Geiger Gibson Program in Community Health Policy at the George Washington University School of Public Health and Health Services (SPHHS), which produced the report. He added that health centers could expect to “be faced with waiting rooms filled with uninsured patients, many with serious and costly health problems.”

The report estimated that 72 percent of these uninsured CHC patients would be in Southern states and that these would be those who are too poor to qualify for subsidies that would enable them to buy subsidized policies at the new Health Insurance Exchanges. The 582 health centers in states that participate in the Medicaid expansion, on the other hand, will gain 2.8 million insured patients, translating into a potential collective revenue increase of more than $2 billion.

CHCs must treat all community residents, including those who lack health insurance or the means to pay for care. “Health centers in the opt-out states will face an ongoing struggle to meet the need for care in medically underserved communities as a result of the potential loss of hundreds of millions of dollars in revenues in 2014 alone,” said the report’s co-author, Sara Rosenbaum, JD, the Harold and Jane Hirsh Professor of Health Law and Policy at SPHHS.

The report projects that many poor people living in the 25 opt-out states will continue to lack coverage and might find long wait times at clinics, long distances to find care, and other barriers that could translate to delays in treatment, or no care at all.—Ruth McCambridge