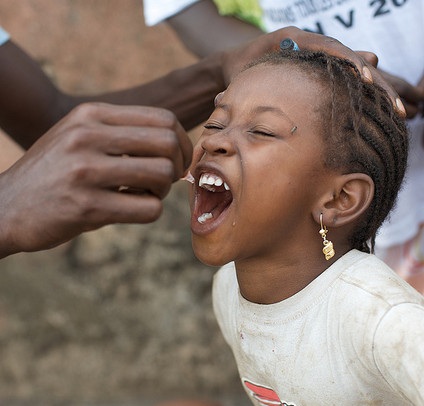 According to the United Nations, polio, a disease not seen in Syria in 15 years, has reappeared, affecting children there and, due to the displacement of Syrian refugees, in surrounding countries. The World Health Organization confirmed the presence of polio in 10 out of 22 children tested in northeastern Syria. More test results are expected on another dozen children who became ill recently. Most of the infected children are two-years-old or younger.

In the midst of a civil war that has killed well over 100,000 people and displaced millions, the UN assuredly knows that these positive tests for polio in 10 children are probably only a small proportion of the likely population to have been infected. Beyond the tragedy of the outbreak of a disease largely thought conquered, for these children, their impending battle against polio occurs against a backdrop of increasing evidence of widespread hunger and starvation.

The UN responded with the announcement of a campaign to immunize 2.4 million Syrian children, as well as intensifying immunization outreach in Lebanon, Jordan, Iraq, Turkey, and Egypt—which have all taken in Syrian refugees—and Israel. Despite the raging civil war, the UN said it had nonetheless inoculated 800,000 Syrian children for polio this year, though another 500,000 had not been inoculated.

It is shocking to read about polio, a disease that had largely been relegated to epidemiological history, except that Syria isn’t the only place where polio is endemic. Speculation is that polio reached Syria through jihadi fighters coming from Pakistan or perhaps Afghanistan, both countries where polio still persists. A third nation where polio has not been eradicated, though probably unconnected to Syria, is Nigeria. Notably, all four nations are in the midst of violent internal warfare. (Nigeria is facing a difficult battle with fundamentalist Muslims under the banner of a group called Boko Haram.) While polio in these other countries has been somewhat geographically restricted, its presence now in Syria demonstrates that diseases do travel, abetted by warfare and social unrest.

While the Times only reports about polio in those four countries, National Public Radio’s Jason Beaubien reports that polio outbreaks are now occurring in Somalia, yet another chaotic war-torn state due to the violence of al-Shabaab, and its neighbors Kenya (where al-Shabaab fighters recently attacked a shopping mall), Ethiopia, and the South Sudan. Beaubien quotes Walter Orenstein of Emory University, who says, “For every case of paralytic polio, we can assume there are at least a 100 to 200—maybe a thousand people who are infected and potentially spreading the virus.”

Bruce Aylward, the assistant director-general for polio, emergencies and country collaboration for the World Health Organization, told Reuters that “a polio virus from Pakistan was found in the sewage of Cairo in December…[and] the same virus was found in Israel in April, also in the West Bank and Gaza.”

What will it take to stem the tide of the new outbreaks of polio? “This is about the neutral, impartial, independent nature of healthcare,” said Siddharth Chatterjee, head of strategic partnerships at the International Federation of Red Cross and Red Crescent Societies. “You need to be talking to all the bad guys, all the good guys, all the religious leaders, all the people who have any form of influence on the community. It’s about ensuring you delineate politics from the child.”

But polio is a disease that cannot be treated. It can only be prevented and eradicated by immunization. To do that in Syria, as well as Pakistan, Somalia, and elsewhere, the NGOs and international bodies have to have safe access to the people, in this case, children in need, but that is difficult in the midst of warfare. They have to be able to conduct the necessary tests and studies to figure out exactly which strand of the virus is infecting people, where it might have come from, and how. These are challenges not likely to be solved by a foundation competition to design a new super-vaccine. Rather, they will be addressed by NGOs and multilateral organizations negotiating with both sides in these internecine conflicts to allow for vaccines that already exist to reach children in need, to provide for additional necessities such as food and potable water, and help negotiate an end to hostilities that are killing fighters and civilians alike.—Rick Cohen