Tax Equity and the Nonprofit Sector 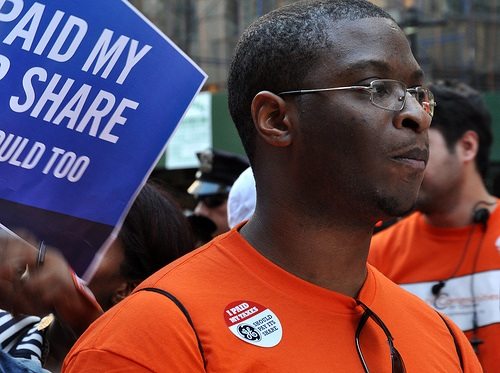 Editors’ note: This article is featured in NPQ‘s new spring 2013 edition—”Nonprofits and Taxes: It’s Your Agenda.”

Cynthia Carranza is the director of a food pantry in Niles, Illinois. For a decade she has watched the growing number of hungry people at her food pantry door, even as government support for her program is slashed. When she hears politicians talking about how our nation is broke, she has a pithy response: “Our country is not really broke, but our priorities are twisted. We’re an incredibly rich and prosperous nation. But our wealth is skewed to a very few fortunate at the top. We’re not broken, just twisted.”

We Are Not Broke, Just Twisted

You may have heard the news—our communities are financially insolvent and the federal government is so mired in debt that we must tighten our belts. Politicians and governors are calling for deep cuts in education, community services, and other investments that cut close to the heart of the nonprofit sector. Around the country, states and localities are making decisions based on this austerity framework, gutting their budgets and undermining the quality of our lives.

There are two important points of engagement for the nonprofit sector to connect to beyond advocating for specific spending initiatives.

Tell our stories of effective government. Underlying the debate over taxes are public attitudes about government and the nonprofit sector. There is an infrastructure of anti-government, tax-cut-advocacy organizations whose primary agenda is to beat the drum about public and community sector “waste, fraud, and abuse.” Their goal is to undermine confidence in the work that the third sector and government do. To counter this, we need to broadcast the success stories of effective government and community organizations that transform lives or provide lifeline services.

Advocate for new sources of tax revenue. For decades, federal lawmakers have been cutting taxes on high-income households and allowing huge corporate loopholes to be established. We need to raise our voices in support of specific revenue proposals that will raise hundreds of billions of dollars a year and obviate the need for extreme cuts.

Many of our community organizations are engaged in state and local spending and budget matters, concerned about specific budget line items related to children, mental health, and community programs. We are shyer when it comes to engaging in tax and budget matters. But as the pie appears to be shrinking, we cannot sit out debates over taxes and revenue.

For three decades, lawmakers have gradually been shifting the design of our tax and revenue system. They have reduced “progressive taxes”—those primarily paid by the wealthy. These include taxes on higher incomes, dividends and capital gains, and inherited wealth. More of our federal and state revenue now comes from “regressive taxes”—those paid disproportionately by lower-income households. These include taxes on wage income and sales taxes.

In 1915, Congress passed laws instituting federal income taxes and inheritance taxes (estate taxes). Over the subsequent decades, these helped to reduce the concentration of income and wealth, and even encouraged Gilded Age mansions to be turned over to civic groups and charities.1 Today, the higher up the income ladder people are, the lower the percentage of income they pay in taxes. This is why Warren Buffett’s disclosure about his own low taxes was so important. Buffett revealed that in 2010 he paid only 14 percent of his income in federal taxes—lower than the 25 or 30 percent rate that more than twenty of his co-workers paid. Buffett wrote:

While the poor and middle class fight for us in Afghanistan, and while most Americans struggle to make ends meet, we mega-rich continue to get our extraordinary tax breaks. Some of us are investment managers who earn billions from our daily labors but are allowed to classify our income as “carried interest,” thereby getting a bargain 15 percent tax rate. Others own stock index futures for ten minutes and have 60 percent of their gain taxed at 15 percent, as if they’d been long-term investors. These and other blessings are showered upon us by legislators in Washington who feel compelled to protect us, much as if we were spotted owls or some other endangered species. It’s nice to have friends in high places.2

The richest four hundred taxpayers saw their effective tax rate decline to 19.9 percent in 2009.3 In 2009, the most recent year for which data are available, fifteen hundred millionaires paid no income taxes, largely because they dodged taxes through offshore tax schemes, according to the IRS.4

The 2001 and 2003 tax cuts passed under President George W. Bush were highly targeted to the top 1 and 2 percent of taxpayers. Between 2001 and 2010, the United States borrowed almost $1 trillion to pay for the higher-income tax cuts. These included reducing the top income tax rate, cutting capital gains and dividend taxes, and phasing out the estate tax, our nation’s only levy on inherited wealth.

In the next two years there may be actual reforms of the federal tax system, motivated in part by embarrassing corporate tax loopholes. Anti-tax forces will continue to advocate for regressive taxes and reduced or eliminated corporate income taxes.

You may have heard the expression “sin taxes” (or “tax the bads”), referring to taxes levied on socially destructive activities such as cigarettes, some of which allocate funds to healthcare and smoking-cessation education. Governors and state legislatures are now looking to address the obesity crisis by instituting taxes on candy and soda. These taxes tend to be regressive, disproportionately falling on lower-income households. Are there progressive “sin taxes?” What are the new “bads,” those destructive forces that are undermining the health and well-being of our society?

There are four modern-day “bads” that should be the focus of our taxes: concentrated wealth, financial speculation, short-term financial horizons, and environmental destruction. Taxing these bads will not only generate revenue but also address several of our most pressing societal problems.

Concentrated wealth. A decade of research in a variety of disciplines now shows how the extreme inequalities of income and wealth are destructive to almost every dimension of our society. Too much concentrated wealth undermines our democratic system, thwarts social mobility, reduces competition in the business sector, threatens our physical and mental well-being, and tears communities apart. Too much inequality destabilizes the economy, as the affluent shift more wealth into the speculative investments and working families take on more precarious debt to cover for stagnant or falling wages.5 These extreme wealth disparities have nothing to do with individual deservedness; rather, they are a cancer on an otherwise healthy society and vibrant private sector. We have to directly reduce wealth concentration through progressive income taxes, estate or inheritance taxes, and taxes on luxury consumption.

Financial speculation. The economic meltdown of 2008 was fueled by extreme inequalities of wealth and the corporate capture of our regulatory system, leaving the Wall Street foxes in charge of our economic henhouse. The healthy “built to last” sectors of the economy that produce real goods and services are being wrecked by the parasitical “built to loot” antics of several thousand transnational corporations whose business model is to squeeze out short-term gains and undermine long-term economic health.

Short-term financial horizons. The incentive system in large global corporations encourages CEOs to adopt a destructive, short-term, “take the money and run” outlook. An earlier generation of CEOs operated within different rules and values—and they had a longer-term orientation.6 There are a wide range of policies and rule changes that would alter this warped incentive system that results in reckless corporate behavior and excessive executive pay.

Environmental destruction. We are consuming the earth’s bounty at a dizzying pace and dumping carbon and other toxins into the environment in ways that are unsustainable. To slow global warming, we have to raise the cost of burning fossil fuels. Progressive consumption taxes and a tax on carbon would raise substantial revenue and reorient investment toward green energy and conservation.

Seven Tax Policies that Nonprofits Should Back

Taxing the wealthy and closing corporate tax loopholes won’t entirely solve our nation’s short-term deficit problems nor dramatically reduce inequality in the short run, but it will have a meaningful impact on both problems over time. Thirty years of tax cuts for transnational corporations and the wealthiest 1 percent has shifted taxes onto middle-income taxpayers and added to the national debt. The nonprofit sector can play a critical role in educating our communities and advocating for progressive tax reforms. We’re not broke by any means.

Chuck Collins is a senior scholar at the Institute for Policy Studies, where he directs the Program on Inequality and the Common Good (see www.inequality.org). His most recent book is 99 to 1: How Wealth Inequality Is Wrecking the World and What We Can Do about It (Berrett-Koehler Publishers, 2012).