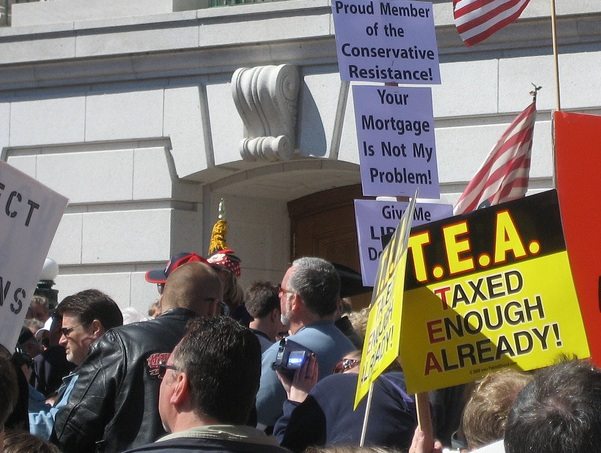 Remember the Tea Party’s claims of discrimination in the way local groups were being treated by the IRS in their applications for tax-exempt—usually 501(c)(4)—status? The Tea Party groups that had filed with the “revenuers” claimed that the IRS’s requests for additional information constituted political harassment, “intimidation,” even a “modern-day witch-hunt.” Earlier this month, Rep. Darrell Issa (R-Calif.) and Jim Jordan (R-Ill.)—last month it was Sen. Rob Portman (R-Ohio)—sent the IRS pointed letters asking whether the Service was applying the same standards to all applicants regardless of their political ideology.

One of the several aggrieved Tea Party applicants was Ohio’s Dayton Tea Party, which had applied for 501(c)(4) status. Last week, the Dayton group withdrew its application with the IRS, describing the IRS requests for supplemental information as “overly burdensome” and “possibly politically motivated.” However, Dayton Daily News reporter Jeremy Kelley followed up on the announcement and discovered some discrepancies between what the Dayton Tea Party said it was being asked about and what the IRS actually requested.

The IRS requested information from the Dayton Tea Party about its websites, news media activity, candidate forums, public rallies, and political endorsements in order to figure out a core aspect of the 501(c)(4) application: determining whether their political and campaign activities were less than the “primary purpose” of the proposed 501(c)(4) social welfare organization. According to the Daily News, “the IRS asked the Dayton Tea Party what percentage of its time and resources were spent on rallies, candidate events and other functions.” Given the definition of a (c)(4), that’s entirely logical information for the IRS to examine.

Dayton Tea Party president Don Birdsall called the IRS information requests “outrageous.”  “They’re asking for the makeup of our membership, and that’s none of their business,” Birdsall explained. “They’re asking for contribution information, and that’s none of their business.” However, the Daily News reviewed the IRS letter and noted that its “only request for names of members comes when it asks who worked on rallies or public events and whether they were paid.” The newspaper showed Birdsall the IRS letter, getting him to admit that his charge about the IRS asking for contribution information was inaccurate.

Like Congressman Jordan, who says that “left-leaning” organizations aren’t being asked these questions, Birdsall charged, “I think they’re asking things they should not ask of anyone, and I think those questions are only being directed at Tea Party-like organizations.” However, like Jordan, Birdsall could show no evidence to back up his charge that other (c)(4) applicants were being asked for less.

As the NPQ Newswire has written in the past, it is difficult to even define what the primary purpose of a 501(c)(4) organization is, or to identify and distinguish its “social welfare” functions from its partisan political activities. Given the reputational damage to 501(c)(3) public charities and to legitimate 501(c)(4) social welfare organizations from (c)(4)s that have pretty dubious track records of social welfare programming, it’s high time that the Internal Revenue Service steps up its scrutiny of 501(c)(4) applicants. Regardless of their political persuasion, the IRS must get applicants like the Dayton Tea Party to respond to legitimate inquiries like this. If they do not want to respond, they should drop their application like the Dayton Tea Party did. According to Birdsall, the Dayton group will opt for “the lesser of the evils” by becoming “a taxable nonprofit,” whatever that is.—Rick Cohen