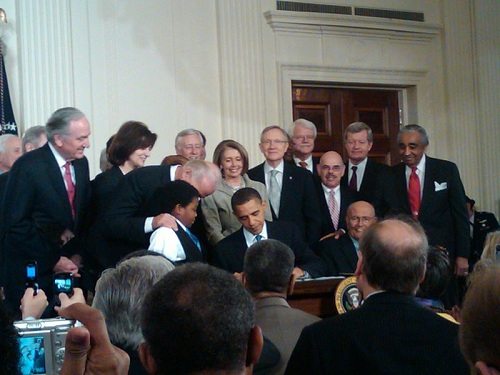 It has been three years since the enactment of national health care reform, but some senators had a collective déjà vu moment during last month’s debate over the FY2014 budget.

Although President Barack Obama signed the Affordable Care Act (ACA) into law on March 23, 2010, although the U.S. Court of Appeals ruled the ACA constitutional on November 8, 2011, and although the Supreme Court reaffirmed the constitutionality of the individual mandate portion of the law on June 28, 2012, somehow a number of senators apparently missed the past three years of history. At least 80 non-binding amendments out of roughly 400 lobbed at the budget proposal tried to turn back the clock by undoing the ACA’s individual mandate (Mike Lee’s contribution), generally delaying different elements of the law (Lamar Alexander, Richard Burr, Kelly Ayotte, and Pat Roberts), limiting eligibility for subsidies to buy insurance on the ACA-created health exchanges (Lindsey Graham), and reducing states’ matching rates for Medicaid expansion (Tom Coburn).

Senator Ted Cruz of Texas went for the whole nine yards, proposing to repeal the ACA in its entirety. His amendment lost on a straight party-line vote, suggesting that one political party is still working from a pre-2010 script. But die-hard opponents like Cruz, dedicated to undoing the past three years of social progress on health care, are doing plenty to upset the applecart to the disadvantage of nonprofits, whose interests are entwined throughout the ACA, and of all Americans who need a stabilized, expanded, improved, rationalized system of health-care coverage.

On the ACA’s third birthday, what is in store for the nonprofit sector’s role and stake in national health insurance reform?

What happened to the expansion of health insurance coverage to very low-income people?

The key element for reaching very low-income people was to expand Medicaid coverage in the states for low-income individuals and households with incomes up to 138 percent of the poverty level. As it currently stands now, 16 percent of Americans are uninsured, and another 16 percent get health care coverage only because they qualify for Medicaid. The ACA called for an increase in the minimum income eligibility for Medicaid to 138 percent of the federal poverty level by 2014, but the Supreme Court decision in 2012 allowed states to opt out of the expansion of eligibility.

Using the concern that by opting in states (which share the costs of Medicaid with the federal government) will be left paying for the bulk of the expansion after initial federal subsidies expire, some governors have come out against Medicaid expansion. Basing its analysis on the opinions of the states’ governors, the Kaiser Family Foundation counts 27 governors in favor of Medicaid expansion in their states, 19 opposed, and five “weighing options.” The Advisory Board Company counts 25 governors in favor, two leaning in favor of expansion, 15 clearly opposed to expansion, three leaning against expansion, and five not expressing an opinion.

In the absence of a single-payer system, Medicaid expansion is the crux of coverage for the very poor. Families at 138 percent of the federal poverty level – $15,414 for an individual, $31,809 for a family of four – don’t have the income to even participate in buying insurance in the health exchanges. More than half of the nation’s 49.1 million nonelderly uninsured are people with incomes below 138 percent of the poverty level. Without this expansion, swaths of the poor will be caught in the gap between the letter of the ACA and the decision of the Supreme Court allowing an opt-out.

One would think that this would be like the position of conservative governors rejecting stimulus money in 2009, vocally denouncing the federal expenditures but generally unwilling to let the moneys bypass their states in the end. In this instance, some governors have stubbornly held to a position of rejecting expanded Medicaid coverage for their constituents, notably governors Rick Perry in Texas, Scott Walker in Wisconsin, Bob McDonnell in Virginia, and Tom Corbett of Pennsylvania. However, other solidly conservative governors have decided not to take the political risk or embrace the counterproductive social policy of denying health-insurance coverage to millions in their states, notably Jan Brewer in Arizona, Chris Christie in New Jersey, and Rick Scott in Florida.

Nonetheless, despite one-fourth of Texans without health insurance, Perry has only hardened his stance against Medicaid expansion. In other states, there seems to be confusion. Missouri governor Jay Nixon supports Medicaid expansion, but the Missouri House has voted it down for the moment. In Indiana, the House called for federal Medicaid funding merged with a state health-insurance program, but Governor Mike Pence wanted the federal funding to come as a block grant. The Florida legislature rejected Governor Rick Scott’s recommendation for Medicaid expansion, leaving one million of Florida’s four million uninsured without a health-insurance option.

Playing politics with the health-care options for poor people is foolhardy if the uninsured decide to target the state executives who denied them and their families the coverage they need. As close as any sector to the needs of the poor and very poor, nonprofits have a crucial role to play in focusing state attention on the coverage needs of the uninsured.

What happened to subsidies for nonprofit employers to buy health insurance?

This was one of the first big crises for the nonprofits in national health insurance reform. When the Obama administration rolled out its program of tax subsidies for small employers to purchase health insurance, it forgot about nonprofits as small employers. The reality is that roughly <a href="http://meps.ahrq.gov/mepsweb/data_stats/summ_tables/insr/national/series_1/2011/tia1.pdf" target="_blank" data-wpel-link="extern